Marco Silva would have breathed a huge sigh of relief as the full time whistle blew at Gil Vicente’s Estádio Cidade de Barcelos. Sporting CP’s coach had been under increasing pressure to turn around a series of poor results which culminated in their 1-1 draw at Slovenian side Maribor in the Champions League. However, on Sunday it all came together for the ‘Leoes’. Sporting put four past Gil Vicente in very decisive performance in which two players in particular starred. One was Nani, the on loan Manchester United man scored and was a nuisance all day for the Gil Vicente defence.

The other was Joao Mario, a graduate of Sporting’s renowned youth academy. The 21-year-old put in an assured performance in the centre of midfield creating two goals for Islam Slimani and Andre Carillo respectively. Though after the game, Marco Silva expressed how he was not surprised with Joao Mario’s performance

It was not a surprise. He had a good pre-season and in the 45 minutes he was on the field in the last game, he gave a very good contribution to the team.

Sporting took the lead after nine minutes thanks to a terrific strike from Adrien Silva. Slimani received the ball out the left wing from Argentine debutante Jonathan Silva, though there were suspicions of off side. He passed the ball to the feet of Adrien Silva who controlled it with his right foot before smashing the ball into the top left corner.

Three minutes later Sporting extended their lead. Arsenal target William Carvalho passed to Nani who controlled the ball by flicking it up and then heading to Adrien Silva who duly gave it back which allowed Nani to rifle his shot into the bottom left corner. Nani is enjoying a resurgence in form as of late, as this goal and his wonderful goal against Maribor demonstrate.

Sporting CP’s third didn’t come until the 69th minute. Slimani played the role of target man perfectly as he flicked a high ball down for Joao Mario who played a lovely through pass for the Algerian to place it first time into the bottom left corner. Slimani had worked incredibly hard all game and deserved his goal. Though it should have been his second as he fluffed a very similar chance in the first half.

Their final goal came as a result of a fine counter attacking move. Joao Mario picked up the ball just past the half way line before laying it off for Nani. The 21-year old though continued his run into the box to receive Nani’s pass and guide the ball for Andre Carillo to slide home from six yards.

This result will surely be a confidence boost for Sporting CP’s players and fans as they go into Friday’s derby with Porto. 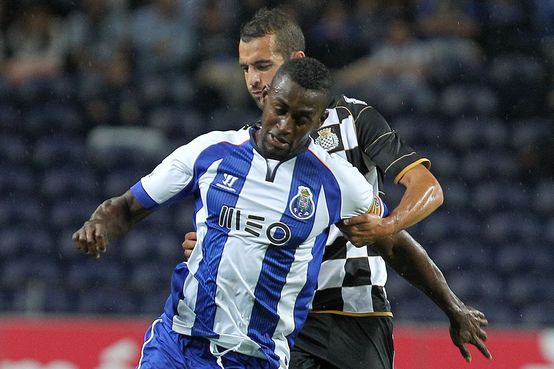 Fresh off their 7-0 conquest over Bulgarian side BATE Borisov in the Champions League midweek Porto played host to the highly anticipated Invicta derby against Boavista at the Estadio do Dragao. Their bitter rivals had been struggling since they had made their return to the Primeira Liga and Porto fans expected a cricket score was on the cards.

Though it didn’t pan out like that at all. The game was delayed 45 minutes due to torrential rain and at one point looked to be in doubt altogether. So this may have hindered the ‘Dragoes’ in their attempts.

As expected, Porto dominated possession but because Boavista defended deep, the home side were unable to find any space behind, which often meant that all of their possession was often for nothing.

The game looked like it might go the underdog’s way as Maicon was shown a straight red for a vicious lunge on 24 minutes. However, the ‘Pantheras’ were reluctant to commit too many men forward instead looking quite content with a draw.

In his post-match press conference, Julen Lopetegui’s frustrations were evident though he attempted to remain positive ahead of their clash with Sporting CP. He told Sport TV

The team gave a tremendous effort. Even with a man down we created numerous chances. Offensively, Boavista did nothing. The draw is too great a punishment for us. We did many things well but not well enough to win the game. Now we turn our attentions to Friday, where we go with the intention of winning.

Boavista will hope to continue their good form as they take on bottom side Gil Vicente at home next Sunday.

Braga left it late to rescue a draw away at Nacional de Madeira on Saturday evening. Sergio Conceicao’s side saw Aderlan Santos sent off for a second bookable offence on 54 minutes only four minutes after he had received his first yellow card.

It didn’t take Nacional long to take advantage of their numerical supremacy as they took the lead thanks to 21-year old Egyptian midfielder Saleh Gomaa’s strike.  However, the ‘Arcebispos’ endeavoured and were rewarded seven minutes from time as Cape Verdean substitute Ze Luis equalised leaving Braga languishing in mid-table.

Rio Ave suffered the inevitable ‘European football hangover’ as they faced Arouca at home on Sunday afternoon. They were outclassed in the Europa League last Thursday as they succumbed to a 0–3 defeat to Dynamo Kyiv and now face an uphill battle to qualify for the second round.

Arouca took the lead 14 minutes in courtesy of a goal by Brazilian midfielder Nildo Petrolina and indeed, deserved their lead. Rio Ave captain Tarantini got one back for his side just after half time but Arouca got the winner thanks to a fantastic first time left-footed strike from David Simao on 51 minutes. The 24-year old Portuguese midfielder’s celebrations didn’t last long however, as he was sent off for a second bookable offence on 52 minutes.

Vitoria Guimaraes missed their chance to go joint top as they were held 1–1 at home to Pacos Fereira on Friday night. Pacos took the lead after three minutes from striker Bruno Moreira. Defender Helder Lopes was sent off on 54 minutes which allowed Vitoria Guimaraes the opportunity to get back into the game. An opportunity which they duly took as Uruguayan midfielder Jonathan Alvez volleyed home much to the delight of the ‘Branquinhos’ faithful.

Braga and Rio Ave face off next Saturday while Vitoria Guimaraes take on Maritimo away from home on Sunday.

Jorge Jesus handed a debut to former QPR goalkeeper Júlio César as he looked for his side to bounce back after their Champions League defeat at home against Zenit St. Petersburg as the Estadio da Luz welcomed Moireirense on Sunday.

It seemed for a long time on Sunday as though it was about to go from bad to worse for Benfica, especially when Joao Pedro headed past his goalkeeper to give the visitors the lead on 19 minutes.

Benfica huffed and puffed in the first half but ultimately looked lost and lacking in confidence as it seemed they were about to fall to a second consecutive defeat at home.

The second half though is when things changed dramatically as Moireirense centre back Marcelo de Oliveira was sent off for a second bookable offence on 58 minutes. This provided the ‘Aguias’ the opportunity to pile on the pressure but it still took a 30-yard screamer from left-back Eliseu to make the sides level. The 30-year-old former Malaga man’s stunning shot soared straight into the top right corner.

It was then the other full back who gave Benfica the lead. Right-back Maxi Pereira was in the right place to pick off Nicolas Gaitan’s beautifully floated cross after the entire Moireirense defence missed it. The long serving Uruguayan rifled his shot into the net.

Lima made it 3–1 from the penalty spot but in dubious circumstance. The 31-year old Brazilian appeared to have been fouled by Jose Anilton Junior who was booked but replays have shown that Lima in fact dived.  In any case, the former Braga striker sent Moireirense goalkeeper Marafona the wrong way as he coolly finished putting the ball into the bottom right corner.

In his post–match press conference, Jesus lamented his side’s performance in the first half but couldn’t hide his delight with the second half performance declaring that his players “played like champions.”

Benfica travel to Estoril for the next game which takes place on Saturday. 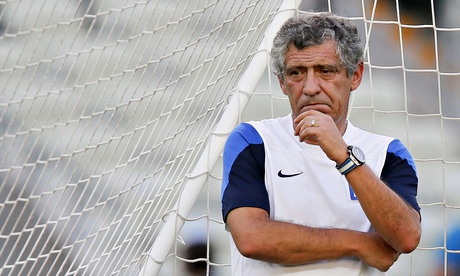 Less than two weeks after Paulo Bento left as national coach, the Portuguese Football Federation (FPF) has confirmed that former Greece manager Fernando Santos will be the Selecao’s next coach.

The 59-year old is notable appointment as he one of a few who has managed all of ‘Os Tres Grande’ – Porto, Sporting CP and Benfica.

Santos has spent the vast majority of his career in Greece, managing AEK Athens, Panathinaikos and PAOK winning the Greece League’s manager of the year award on four occasions.

In the final minutes of the Costa Rica game, Santos was sent off for dissent and received an eight game ban from FIFA. It is thought that this incident had no bearing on Santos’ appointment and indeed a decision on his appeal is expected to be announced this week.

The FPF had preferred a Portuguese speaking coach to take the reins of the ‘Selecao’ and signing Santos was reportedly a high priority.

One criticism of Santos is his predilection for defensive football as he showcased as Greece manager and so expect Portugal to be a very counter attacking team that relies heavily on Cristiano Ronaldo for goals. Santos will be naming his first squad very soon and it will be interesting to see who is dropped and who is called up.

Portugal’s first game under Santos will be a game against France in Paris on October 11 before they continue their Euro 2016 qualification campaign away to Denmark on October 14.