Nothing to separate between Sporting CP and Porto 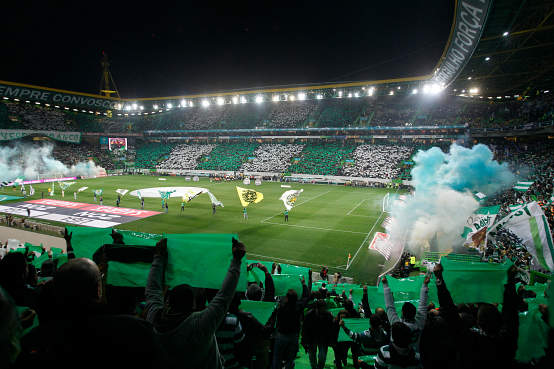 There was a grand sense of occasion at the Estadio Jose Avalade Friday evening and the assembled crowd was treated to a thrilling spirited contest between two of Portugal’s biggest teams.

The home crowd were in dreamland just two minutes into the game as Sporting took the lead. Nani intercepted Casemiro’s poor pass on the half line and dribbled confidently towards the goal until he was met by a wall of blue shirts. The 27-year-old bypassed the Porto defence by playing a clever chip to the right of the box for Andre Carrillo to run onto. The Peruvian sent in a first time cross for the unlikely Jonathan Silva to head into the net.

Sporting ran riot in the first half and Porto had no answer. Indeed, the ‘Leoes’ were unlucky not to be at least 2–0 up going into half time.

Julen Lopetegui recognised how little of a threat the ‘Dragoes’ were in the first half and showed bravery in making two substitutions at half time. Christian Tello replaced Ricardo Quaresma but it was the introduction of Oliver Torres, who came on for Ruben Neves, which changed the game. The on-loan Atletico Madrid starlet provided the creative spark in attack that was previouly lacking.

Sporting coach Marco Silva appeared content with his side’s one goal lead and indeed, Sporting sat back inviting Porto’s attack. However, this backfired on 56 minutes. Oliver Torres spotted right back Danilo’s overlapping run on the right. The Brazilian low cross across goal was turned into his own net by the unfortunate Mahamadou – Naby Sarr.

Both sides had chances to win out the game but ultimately the draw goes down as the fairest result on the night.

Sporting CP go to Penafiel on Saturday while Porto host Sergio Conceicao’s Braga on Sunday. Both sides will hope they don’t suffer a hangover from their mid-week Champions League games and allow Benfica the chance to pull away.

During the summer, it was widely expected that William Carvalho was going to secure a big money move to one of Europe’s super heavyweights. Manchester United and Arsenal were said to be wooing the 22-year-old but nothing materialised. Instead, Carvalho remains a Sporting CP player much to the delight of the fans.

Leading Portuguese sports newspaper A Bola reported on Monday that Carvalho is now set to sign a new contract that will see the defensive midfielder earn ten times what he currently owns. This may sound excessive but Carvalho current wages are reportedly to be around €8000 a week, a relatively low sum for a player of his standard.

A Bola also noted that the wages will be the only thing to change on his current contract. The contract will still last until 2018 and the minimum fee release clause is still €45 million.

Just last week, Carvalho rubbished rumours he was desperate for a move away.

Nobody ever heard me say I wanted to leave Sporting or was dissatisfied. I’ve always been satisfied at Sporting. 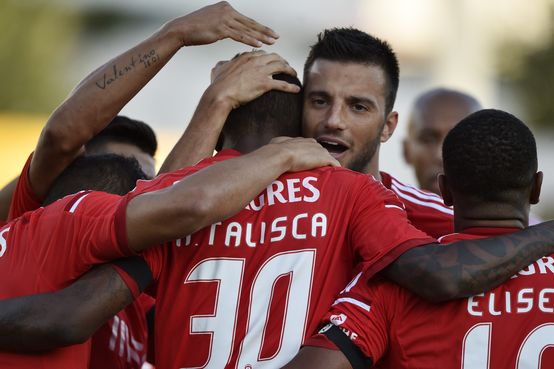 The ‘Aguias’ started brightly but in the end just about scraped past a tenacious Estoril 3–2 on Saturday evening.

In the opening minutes Benfica looked as if they were about to steamroll Estoril and took the lead after just three minutes thanks to a wonderful goal from an impressive Anderson Talisca. The 20-year-old picked the ball up just past the half way line and then dribbled purposefully past a series of Estoril players. As Talisca arrived in the box, he finished coolly past Estoril goalkeeper Pawel Kieszek.

Talisca grabbed his second just five minutes later and it came about as a result of some fantastic team pressing. Estoril’s centre back Yohan Tavares was put under massive pressure forcing to attempt to pass out the left to Bruno Miguel. However, it was read by Nicolas Gaitan who turned on his pace and beat the left back to the ball. Kieszek came out to close him down but Gaitan squared it to Talisca to score into an empty net. After his brace, Talisca is now the Primeira Liga’s joint top goal scorer with five goals.

Benfica took their foot off the gas slightly after this which allowed Estoril to get into the game and indeed, the ‘Canarinhos’ looked very dangerous going forward.  Their hard work paid off on 38 minutes through a Diogo Armado strike.

Estoril levelled proceedings after 53 minutes through Kleber. The impressive Kuca managed to avoid Maxi Pereira to play a very clever ball into the box for Seba to run onto. Artur attempted to close Seba down but the Brazilian squared the ball to his compatriot Kleber to finish into an empty net from six yards.

The turning point in the game came after Matias Cabrera was shown a second yellow card for a heavy challenge on Jardel and this allowed Benfica to grab hold of the game. It looked as though Eduardo Salvio’s through ball into the box for Derley was covered by Kieszek but he missed it. Derley took a shot from an acute angle which looked to be heading for the post but an oncoming Lima smashed the ball into the net to seal the win.

Boavista, Braga and Maritimo all win

Boavista continued their run of good form as they overcame Gil Vicente 3–2 at home on Sunday afternoon. However, it was the visitors who took the lead through Nigerian forward Simy after just three minutes. Gil Vicente’s lead did not last long as Boavista’s Brazilian defender Philipe Sampaio headed effort made the game level on 16 minutes.

Simy’s second gave Gil Vicente the lead again after 56 minutes, but the ‘Pantheras’ struck back just two minutes later thanks to Anderson Carvalho. Indeed, the Brazilian was the hero of the day as his last minute strike for Boavista ensured the victory sending the crowd at the Estadio do Bessa into the raptures.

Gil Vicente will hope to end their miserable start to the season at home to Estoril next Sunday. On the other hand, Boavista go into Friday night’s match away at Vitoria Guimaraes with some confidence having secured seven points from their last three games.

On Saturday evening, Braga put an end to their rather indifferent early form as they beat Rio Ave 3–0 at home. Though it must be said, Sérgio Conceição’s side were helped greatly in their efforts when Emmanuel Boateng was shown a straight red card just 13 minutes into the game.

Despite this, Braga still needed Ze Luis to score a penalty after an hour to make it 1–0. Ruben Micael doubled the ‘Arcebispos’ lead on 73 minutes. 24-year-old Colombian forward Felipe Pardo made it 3-0 six minutes from time.

Rio Ave’s European adventure may be hampering their league form as they have only got one point from their last three games. It will be another tough week of travelling for Rio Ave as they face Aalborg in Denmark on Thursday before clashing with Nacional on Sunday evening. Braga face a tough trip to the Estadio do Dragao to face Porto.

Maritimo put an end to Vitoria Guimaraes 100% record in dramatic fashion on Sunday as they smashed the ‘Branquinhos’ 4–0. Maritimo were taken over by Paulo Bento’s former assistant Leonel Pontes after the World Cup and has been quite successful so far with this victory taking the side to third place in the table.

The ‘Verde-Rubros’ ran riot in the first half taking the lead after six minutes through Edgar Costa. A brace from Brazilian midfielder Fransergio made it 3–0, before Nigerien Moussa Maazuo completed the rout on the stroke of half time.

Vitoria Guimaraes face Boavista at home on Friday while Maritimo will hope to continue their good form when they travel to Pacos Fereira on Sunday.

The first Portugal squad under Fernando Santos will be named on Friday, 3rd October and the only thing that is certain is that Cristiano Ronaldo and 24 others will be selected.

In his official presentation, Santos said that he open to selecting any available player,

I have no indication of players who cannot be selected. I will look at all Portuguese players in the domestic league and abroad when making my choice

The former Greece coach is taking a different approach to his predecessor Paulo Bento who famously fell out with a number of players.

Players included in Santos’ pre-selection include; Ricardo Carvalho, Zenit Saint Petersburg’s attacking midfielder Danny, Tiago of Atletico Madrid, the Portuguese Quintet at Croatian side Dinamo Zagreb; Eduardo, Ivo Pinto, Paulo Machado, Gonzalo Santos and Wilson Eduardo. and interestingly, Southampton’s Jose Fonte whose performances at the heart of Southampton’s defence over the past two seasons have not gone unnoticed and the 30-year-old could make his debut for his country.