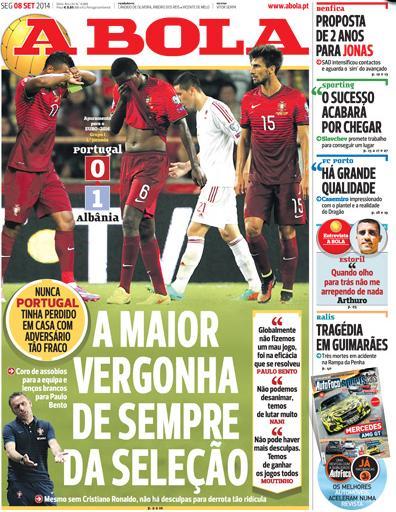 As the final whistle of their first qualifying game for Euro 2012 blew, Portugal coach Paulo Bento was met with a cacophony of boos and whistle as the entire crowd of the Estadio Municipal in Aveiro became a sea of white handkerchiefs. The ‘Selecao’ had just lost 0-1 to Albania, a side ranked 70th in FIFA’s World Rankings.

Portugal dominated possession for much of the game but they lacked any real cutting edge up front. Indeed, the absence of Cristiano Ronaldo maybe exacerbated the situation but this has been a trend in many of their games over the two years.

Initially, Bento was adamant in his commitment to the job saying “I don’t believe questioning the whole set-up after one game is the right way to go.” However, the overwhelmingly negative reaction to the loss appears to have changed his mind as he decided to resign a few days later.

The morning after the game, Portugal’s leading sports newspaper A Bola summed up the country’s feeling with their headline declaring “Selecao’s greatest ever shame.”

Former Sporting CP coach Bento was appointed to the national team in 2010 after a disastrous start to their Euro 2012 campaign under Carlos Queiroz drawing 4-4 at home to Cyprus before losing 1-0 away to Norway. They qualified for Euro 2012 finishing second behind Denmark and were drawn with the Danes again in the group stage for that tournament along with Germany and the Netherlands in the ‘Group of Death’.

Portugal lost to Germany but defeated both Denmark and the Netherlands to qualify for the quarter-finals where they beat the Czech Republic thanks to a solitary Ronaldo goal. The next game was arguably Bento’s finest moment as Portugal coach though it did not end in success as they took eventual champions Spain to a penalty shoot-out in the semi-finals.

World Cup 2014 qualification began with optimism though a lack of quality up front was becoming a major issue. Portugal slumped to two 1-1 draws at home with both Northern Ireland and Israel which saw them finish one point behind Russia in second which meant they needed to win a play-off game to make it to Brazil. Portugal beat Sweden 4-2 on aggregate mainly thanks to Ronaldo’s second half hat – trick in the second leg.

At the World Cup Portugal once again found themselves in the ‘Group of Death’ with Germany, Ghana and the USA though this time they were not so successful. They were demolished 4 – 0 by Germany in the opening game before saving a point in the dying moments against the USA.

A 2-1 win over Ghana was not enough to make it to the Second Round. Portugal were hampered by injuries to key player such as Ronaldo and Fabio Coentrao but too often they played without any creativity in midfield and struggled to penetrate defences under. This, combined with his failure to properly integrate the great young Portuguese such as Galatasaray’s Bruma, Ruben Neves of Porto and Manchester City’s Marcos Lopes, saw his position become untenable.

The front-runners to take over as national team coach are currently former Greece coach Fernando Santos and former Porto coach Vitor Pereira. The Portuguese Football Federation would reportedly prefer a Portuguese speaking coach though the feeling amongst most is that a foreign coach is needed for the ‘Selecao’ to truly improve.

On Sunday, two sides with 100% records went head to head and while Porto were overwhelming favourites for the game, Vitoria Guimaraes certainly showed that they are no pushovers. The ‘Branquinhos’ proved to be very dangerous from set pieces and had a number of chances which could have seen them take the lead against the ‘Dragões’. It was clear that Porto had one eye firmly on their mid-week Champions League clash with Bulgarian side BATE Borisov.

Julen Lopetegui did hide his dissatisfaction with the referee in his post-match press conference and indeed, Paulo Baptista endured a very busy game.  The Porto coach took issue with two incidents in the match namely a penalty not given in the first half for a foul on Yacine Brahimi and Brahimi’s goal in the second half which was wrongly called as offside.

Porto were awarded a penalty after Brahimi was impeded in the box. Jackson Martinez stepped up to score on his 100th appearance. The Colombian striker placed the ball in the bottom right corner after sending Guimaraes’ Brazilian goalkeeper Douglas the wrong way.

Vitoria Guimaraes take on Pacos Ferreira on Friday while next up for Porto is the highly anticipated local derby at home against Boavista next Sunday.

It was yet another 1-1 draw for Sporting CP fans to endure, their third in a row, this time at home to Belenenses. Much like Portugal’s national team, the ‘Leões’ are lacking a cutting edge up front despite dominating possession.

Though the chances that they did create were stopped by the inspired performance of Belenenses’ former West Bromwich Albion goalkeeper Matt Jones who made two paticularly excellent saves to deny William Carvalho and Islam Slimani.

Belenenses looked very dangerous on the counter throughout the game and took the lead in the 28th minute. Winger Sturgeon’s peach of a cross picked out the increasingly impressive 23-year-old Brazilian Deyverson who headed past Rui Patricio. Needless to say, this did not sit well with the Estadio Avalade crowd.

Though their dissatisfaction was somewhat sated after a mix up between defenders Bruno China and Brandão gave Peruvian forward Andre Carrillo the opportunity to intercept and calmly slot home on 34 minutes.

Belenenses arguably had the best chance to win the game though Sporting’s blushes were spared thanks to Rui Patricio. Their captain made a fine save from a Deyverson shot after he was put through on goal from Miguel Rosa’s incisive pass. Sporting recent form was summed up as Jefferson was sent off after being shown a second yellow card in the 90th minute for dissent.

Sporting find themselves languishing in mid – table and will be desperate for a win when they travel to second from bottom Gil Vicente next Sunday.

Boavista earned their first win in the Primeira Liga since the 2007/2008 season by defeating Academica 1-0 at home on Sunday, though no Pantheras player scored the goal. Anderson Correia’s seemingly harmless low cross was tapped into the net by the unfortunate Ghanaian defender Richard Ofori.

Rio Ave missed their chance to go two points clear at the top of the table as they were held 1-1 at Moireirense. Brazilian Diego Lopes gave the ‘Rio Grande’ a half – time lead  before Moireirense levelled thanks to a goal from Vitor Gomes.

Boavista next game will be the aforementioned derby game against Porto. Rio Ave host Arouca on Sunday and will hope they are not affected by a Europa League hangover after taking on Dynamo Kyiv at home. Braga, meanwhile, travel to Nacional 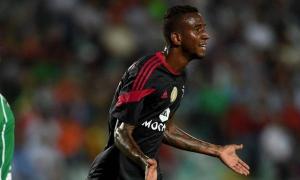 On Friday, Benfica travelled 48 kilometres south to take on Vitoria Setubal and certainly showed that despite their summer departures their league form will not suffer.

The ‘Aguias’ ran riot as they put five goals past an ultimately very poor Vitoria Setubal side. The rout began after 10 minutes. Eduardo Salvio scored with a wonderful left footed strike after receiving the ball on the edge of the 18 yard box.

Benfica were gifted their second on 38 minutes thanks to some comical defending. Anderson Talisca played the ball out left to Nicolas Gaitan whose initial cross was poor but the Vitoria Setubal  failed to adequately clear it. The ball fell kindly for Talisca who finished powerfully with his left.

Talisca got his second five minutes later. The 20-year-old Brazilian was brought down just outside the box and from the resulting free kick Talisca smashed the ball into the bottom left corner.

Talisca’s hat-trick was completed just after half time. Lima was running down the left before sending a low cross into the box. It came to Salvio who shot was parried by Setubal’s German goalkeeper Lukas Raeder. Talisca reacted the quickest and he finished emphatically.

Their fifth and final goal came after 76 minutes. Lima ran down the left and sent another low cross across the goal. Raeder attempted to smother the ball but misjudged the pace on the ball which essentially gave Dutch substitution Ola John an open goal to tap into.

In his post-match press conference, Jorge Jesus didn’t hold back in his praise of the €4 million summer signing Talisca. He declared “”I’m very happy with the way Talisca has adapted. He’s another one who will bring in millions in a few years.”

Talisca was signed from Brazil side Esporte Clube Bahia and had been attracting the attention of one Jose Mourinho. The Chelsea has indicated the he has been impressed with Benfica’s recruitment over the past few seasons and told Portuguese broadcaster TVI24:

They say Talisca is unknown, but he is only so unknown because he’s only not playing in England because he doesn’t have a work permit. If he had one, he would be here!

Next Sunday Benfica will hope to continue their good league form as they host mid-table Moreirense.