A fully fit Stevan Jovetic will be exciting to watch

Those who knew Stevan Jovetic before he joined Manchester City in the summer of 2013 would have been fully aware of the reasons why he commanded a fee of £22 million.

However, his first season at the Etihad Stadium was badly interrupted by injury with the Montenegrin forward playing just 16 times in all competitions, mostly as a substitute. It didn’t take long for the gutter press to label Jovetic a flop but the 24-year-old worked hard to get back to full fitness and was arguably City’s standout performer during preseason.

With Sergio Aguero still overcoming his own niggles, Jovetic has been given the nod to play alongside Edin Dzeko up front to start the season and, after a strong showing against Newcastle United in City’s opening game, he showed exactly what he is capable of against Liverpool. 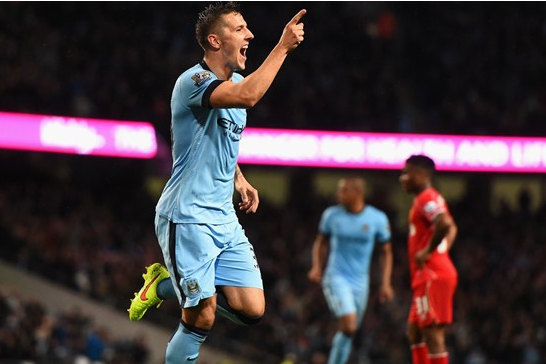 Jovetic’s first goal, when he picked the pocket of the sleeping Alberto Moreno before smashing the ball through Simon Mignolet’s legs, showed great desire to capitalise on a defensive lapse, while his second effort displayed all the characteristics City fans expected when he joined 13 months ago. Having played a clever back heel to Samir Nasri, Jovetic turned and raced towards the penalty box, receiving the Frenchman’s return pass before finishing left footed.

With Alvaro Negredo sidelined for the next few months, Jovetic can expect plenty of game time as City enter the Champions League next month.

He was working the whole game, without the ball too. He was very unlucky last season but we never had any doubt about this quality. To start the season in this way after an unlucky new season is good.

Losing a player of Luis Suarez’s ability was never going to be easy for Liverpool but the acquisition of Mario Balotelli will go a long way to offsetting that if the Italian knuckles down and fulfils his potential.

There are plenty of reasons to be sceptical about Balotelli’s prospects at Anfield but there is no denying that he is exactly the type of player required right now to take some of the workload off Daniel Sturridge.

Against his former club, Sturridge looked more comfortable once Rickie Lambert was introduced as he was able to drift wide and drop deeper to receive the ball without the responsibility of having the be the player furthest forward.

His sublime outside of the boot cross forced an own goal off the knee of Pablo Zabaleta and gave the visitors a glimmer of hope late on.

Balotelli is by no means a target man but he will occupy opposing centre backs with his power and pace, giving Sturridge a licence to roam free.

The interesting scenario now is around who Balotelli will replace in the Liverpool team and whether Rodgers returns to the two up front system that served him so well for most of last season.

The downside to a Balotelli/Sturridge combination is that it will leave the rest of the team a lot more exposed as neither striker is renowned for their defensive work from the front.

If Rodgers can get either or both to work hard and pressure opposing defences then it reduces the need to play an extra midfielder, as has been the go for Liverpool’s first two fixtures.

He’s at a stage in his career where this might be his last chance at a big club because he needs to settle down and show maturity, and I’ve worked with those types of players all my life from when I worked in youth coaching. I never ever had the finished article and that’s how, at times, I like it. He’s got huge potential but needs to come to Liverpool and be consistent, and if he can do that we’ve got one hell of a player.

City’s strength in depth is frightening

Aside from the three substitutes that Manuel Pellegrini did introduce last night, he had four other full internationals on the bench in Willy Caballero, Bacary Sagna, Aleksandar Kolarov and James Milner.

Not in the match day squad were Eliaquim Mangala, who cost a reported £32 million, Alvaro Negredo, Micah Richards, Dedryck Boyata, Matija Nastasic and Frank Lampard, all of whom could more than do a job if required.

Much was made of the Financial Fair Play restrictions imposed on City but, on paper at least, only Chelsea come close to matching their overall quality in the Premier League.

Pellegrini’s challenge will be to juggle the pack when needed in order to compete on a number of fronts, with top spot in their Champions League group a must this time round.

You can spend as much money as you like, it doesn’t guarantee you anything.

Wise words from the Liverpool boos who, despite spending millions on nine new players, has a lot of work to do to embed them into his system, and the defence still looks suspect.

Two of his back four against City, Dejan Lovren and Alberto Moreno, are fresh faces and both were found wanting at various points throughout the course of the 90 minutes.

The below image, taken moments before Jovetic set Nasri on his way with a clever back heel in the build up to the second goal, shows how poor Liverpool’s defensive line was at times – Lovren and Moreno are completely out of sync with the more established Glen Johnson and Martin Skrtel. 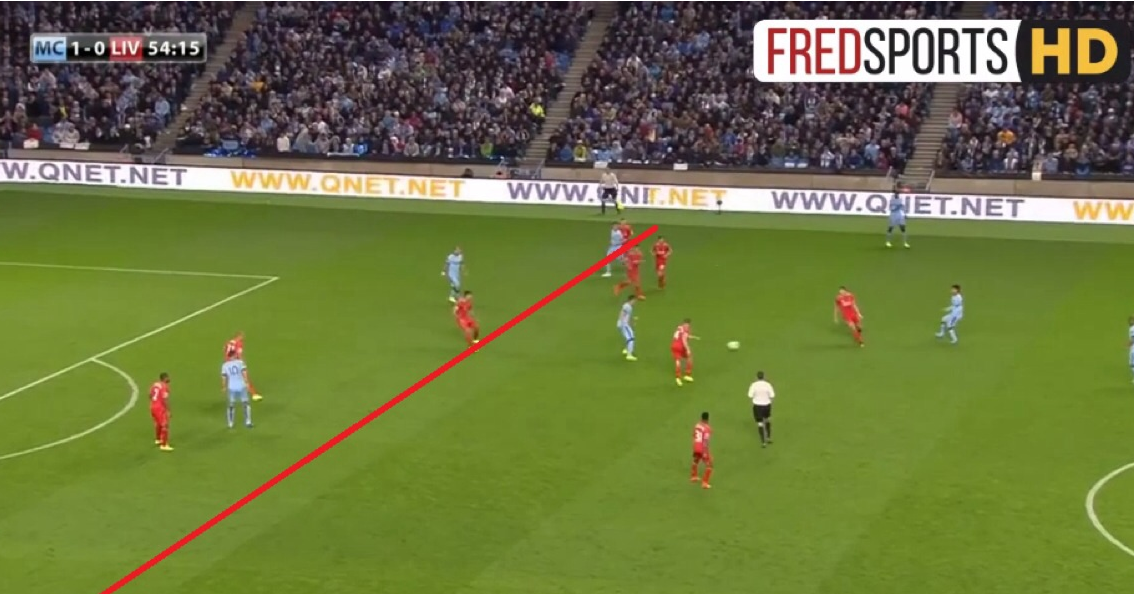 Liverpool’s defensive frailties cost them greatly at times last season and they conceded 50 goals in 38 games; Tottenham Hotspur were the only club in the top eight that leaked more.

Lovren and Moreno will of course take time to find their feet but with a trip to White Hart Lane against table topping Spurs coming up this weekend, they again won’t get away with any lapses at the back.

Protection for the back four is also crucial, and while Stevan Jovetic’s second was a thing of beauty, the below GIF illustrates how no Liverpool midfielder picked up his run and dropped back to cover the space opened up by a retreating defence.

Alberto Moreno may have been culpable for Manchester City’s first goal, but the Spaniard was quite impressive on his Premier League debut, especially going forward.

The left back took up advanced positions at every opportunity, something that Manuel Pellegrini sought to nullify with the introduction of Jesus Navas once his side were two goals to the good.

Unlike David Silva who likes to drift inside, Navas is an out-and-out winger and his presence forced Moreno to be much more defensive for the remainder of the game.

Off the field, the Chilean manager has made only minor changes to the squad which claimed the league title last season, with only Willy Caballero, Bacary Sagna, Fernando and Eliaquim Mangala joining during the offseason.

All four are arguably better players than those they have/will replace in the squad though and, as mentioned previously, further improves City’s already impressive strength in depth.

Pellegrini and City have also done well to tie down the spine of the team – Vincent Kompany, David Silva, Sergio Aguero and Edin Dzeko – to new contracts, all of which are at least five years in length.

Poll: Will Mario Balotelli be a success at Liverpool? >>