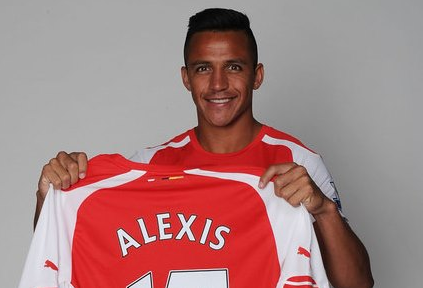 Having signed Alexis Sanchez, won a trophy and with players like Aaron Ramsey, Mesut Özil and Theo Walcott set to finally link up in the same team all relatively free of injury, most Arsenal fans you will speak to are cautiously optimistic they might be in with a genuine chance of winning the Premier League title this season.

Regardless, it certainly will not be easy for them. Here are five factors that may impact on Arsenal’s pursuit of that elusive first league title at the Emirates Stadium.

The signing of a defensive midfielder

Last year, Arsenal conceded more than half of their league goals in the space of four away games, as we have been reminded by the recent BT sport adverts. Manchester City 6-3, Liverpool 5-1, Chelsea 6-0 and Everton 3-0. If they are to avoid further humiliation this season, they desperately need a solid, natural defensive midfielder who can sit in the anchor role with discipline thus reducing Arsenal’s vulnerability to counter attacks and generally giving them a bit more mettle in midfield.

Achieving this will be absolutely crucial in any title threat they may pose, as it’s not just the individual games in isolation which is the problem, it’s the fact that off the back of those results comes massive pressure and drops in confidence – showcased by results such as Napoli 2-0 Arsenal, Arsenal 2-2 Swansea, Stoke 1-0 Arsenal, all of which came off the back (kind of) of the thrashings they suffered on their travels.

For Arsenal to be a genuine title threat they simply cannot even come close to conceding 20 goals in the games at their four closest rivals’ homes. Realistically, even halving that figure will be of limited value as they’ll still be conceding over 2 per game. I see a solid defensive midfielder, probably one of Bender or Khedira (maybe Carvalho but he would be a massive gamble) as their only ‘quick fix’ to this problem, and even then, more defensive discipline will be required from the rest of the team, which leads me on nicely…

One of the main criticisms levelled at Arsene Wenger by ex players and pundits alike is that he does not treat any game differently. He’s incapable of going to Old Trafford or Stamford Bridge and saying ‘Ok, don’t lose and give this lot three points, anything else is a bonus’.

That will need to change, perhaps Steve Bould’s input could be valuable here, as what really needs to happen is that the team are sat down before one of these high pressure occasions and it is drilled into them that tracking back, holding the ball in midfield and being a bit more direct/ruthless on the break is the only way this habit of losing heavy is going to be kicked. Arsenal cannot be title contenders and at the same time be getting thrashed 5-1, 6-0 etc on an uncomfortably regular basis. In the long term it just doesn’t work, for reasons explained already.

So, adaptation to these big occasions and a willingness to change from Wenger himself will be another big factor influencing Arsenal’s title credentials.

The bee in Arsenal’s bonnet for countless years now, there is an sense of inevitability these days that Arsenal will eventually be derailed by injuries. It’s difficult to tell why they’re hit so hard; having some of the top training facilities in the country and a manager who revolutionised English football’s attitude towards physical fitness – they should be (if anything) less prone to injuries.

But, maybe due to the fact that possession football naturally attracts more tackles and therefore 50/50s, or maybe due to other factors such as bad luck and just in general, slightly weak players (Wilshere, Walcott, Cazorla – for example), this poses possibly the biggest threat to Arsenal’s title credentials. They need to find a way to make sure they are not hit again by injuries, as in all honesty it’s no longer an excuse.

Injuries are part and parcel of the game and if Arsenal are consistently allowing themselves to be prone to collapse then it is their responsibility to either fill their squad out, or (more sustainably) source the reason(s) for the problem and actually sort it out.

Last year, most pundits would generally agree that with a world class striker, Arsenal would have at the very least been in the title race until the final couple of games. It’s my personal belief that we would’ve won it had the pursuit of Luis Suarez been successful last summer, even with all the extra baggage that would’ve carried.

Yet that’s in the past and this year, they have a lot more options. Significantly, enough options to afford Olivier Giroud a break. Him having to play 50 games last season was quite simply unacceptable and actually unfair on him, Giroud might start to look a lot better when Arsenal have 3-4 other options they can utilise up top.

Firstly, Alexis Sanchez has come in and if given free roam – he may well become a well behaved Luis Suarez for Arsenal in the support striker role, he certainly has the potential. Add to that Theo Walcott is coming back, apparently having bulked up a bit as well, and then factor in the emergence of Joel Campbell and maybe, just maybe, Yaya Sanogo – they might find their striking dilemma solves itself.

The other possibility is that Sanogo’s Emirates Cup performance was a fluke, Walcott will never have the build to be a striker, Joel Campbell will struggle to adapt and Alexis is frustratingly deployed on the wing. In that scenario it is difficult to see Arsenal mounting a serious title push, as the same difficulties up front will recur and by the latter stages of the season Giroud will become tired, sluggish and demotivated. Arsenal fans are probably right to be optimistic this will not happen though.

A little bit of luck

For me, very few Premier League champions have ever been victorious without a fair slice of luck. Just thinking of recent history, City were bloody luck yin 2011/12 that Barton lost his head, thus contributing to their ability to completely overload QPR in those last few minutes. United were virtually uncontested in 2012/13 and this was a slice of luck in itself as City couldn’t maintain their resistance and the likes of Chelsea, Arsenal and Liverpool were in no fit state to challenge.

Then, just last season, City benefited from an enormous slice of good fortune via a mis-control and stumble from Steven Gerrard. This is not to say that the winners didn’t deserve it on any of these occasions, but they also had a bit of luck – in the same way that Arsenal will need their share of good fortune in order to win the league for the first time in over ten years.

This might come in the form of an injury free season, or perhaps in a more unpredictable way – a late ‘slip up’ from one of Arsenal’s main title rivals perhaps.