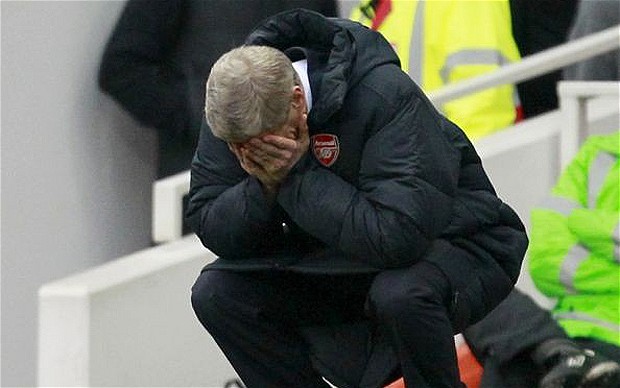 After more defensive mishaps and another capitulation, many Arsenal fans can be forgiven for losing patience with the team’s perennial flaws. Over the last 12 months alone, it would be no exaggeration to say The Gunners have become something of a laughing stock; the butt of utterly hilarious wordplay jokes from our glory-hunting peers (I’m not bitter as I’m sure you can tell).

However, contrary to the various reports we’ll undoubtedly be hearing over the next few days, there were in fact more positives than negatives as Arsenal fell to their third defeat of the season at Ewood Park. Well I thought so at least.

It sounds naïve to blame yet another painful result on misfortune but there was definitely an element of bad luck that strongly contributed to Blackburn’s shock victory, in that there’s little you can do about two reflex own goals. Admittedly, the defending during the build-up was embarrassing, and changes need to be implemented; be that in the drills done on the training pitch or the staff doing the coaching. As far as I’m concerned, the players are good enough individually, they just need to somehow become more of an effective unit collectively.

Going forward, Arsenal put in their best performance of the season. With Arteta and Ramsey pulling the strings, there was finally the creative impetus that has been blatantly lacking in previous games and even holding midfielder, Alex Song got involved in the first two goals with some penetrative passing. The movement of Gervinho and Arshavin was top class and was a big factor in our electric start to the game. As ever, Robin van Persie’s link play was second to none. He remains one of only a handful of players in world football capable of creating something from nothing.

I consider it no coincidence that following the departure of Bacary Sagna, Arsenal crumbled. Johan Djourou out of position and two players new to the Premier League making up three-quarters of the back four was always going to threaten to spell disaster. Going back to my earlier point, I think it’s evident we have good individual defensive players.

Andre Santos, one of the aforementioned new additions, failed to adjust to the rigours of the English game in that his positioning was suspect to say the least. However he came into his own in an attacking sense late on with a series of terrific balls into the box; one of which fellow newcomer, Per Mertesacker, will be kicking himself for not converting (cue witty comments like “shouldn’t bother, he’d probably miss”).

His delivery could well be an asset in the coming months, particularly when targeting Marouane Chamakh, who finally ended a 10-month-long Premier League goal drought and may well prove to be the target man we were promised upon joining last summer. To his credit, he scored a terrific old-fashioned striker’s header at Ewood Park. With confidence slowly returning to his game, we could have a quality player back on our hands, and the plan B that has notoriously been missing for so many years.

It was pleasing to see the Moroccan make an impact from the bench, when so often Wenger’s tactical changes have been ineffective. Fellow substitute, Theo Walcott also looked lively after coming on and it is a welcome luxury to have him, Arshavin and Gervinho all vying for the wide positions in the side; they each bring different qualities to the table, ones that we can pick and choose from depending on the opposition. To an extent at least, this is proof that there is at least some depth to Arsene Wenger’s squad.

The defence was all at sea yesterday, nobody is questioning that, but new players have to be given time to gel and with the right off-the-pitch support, I’m confident things will improve. Well, that confidence is borne from the fact that it simply cannot get any worse. The attacking players are returning to form which can only be positive. It seems for now; Arsenal will just have to rely on scoring one more than you.