With Martin O’Neill’s Republic of Ireland side teetering over the brink of EURO 2016 elimination, for domestic managers the continental adventure is just about to begin.

One such man is Shamrock Rovers supremo Pat Fenlon who yesterday saw his side paired with Finnish outfit Rovaniem Palloseura in the first qualifying round of the 2016/2017 UEFA Europa League. 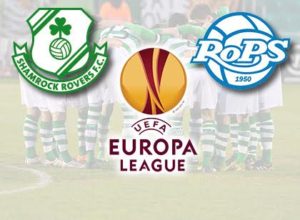 The first thing on the agenda for Fenlon will be to dig out his address book in the hope of brushing up on an opponent he has little knowledge of as he explained in an official statement released by the Tallaght club:

Their league would probably be on par with what the League of Ireland is like, their players, we would not know too much about.

But, that’ll change throughout the next week, I’ll reach out to people within football that I know and we’ll learn a lot about the team and their players.

RoPS, to give the club their abbreviated name, currently lie in sixth position of the Finnish Premier Division after 13 games.

Fenlon, however, won’t be taking anything for granted as he prepares for the first leg of the tie which will take place at Tallaght Stadium on Thursday June 30th.

I’d imagine any Finnish team would be a decent opposition. I would not pay too much attention to their current league standing.

Our players will learn a lot from them when they come to play us over here, it’s a two legged tie so it could work out for us.

The return leg on Thursday July 7th will see Rovers travel to Finland for the first time in European competition.

RoPS are based in the northern city of Rovaniemi, just ten kilometres south of the Arctic Circle. Its most famous resident is perhaps one Father Christmas who is said to reside in the city’s Santa Claus Village.

Fenlon however won’t be expecting any early Christmas gifts from the big man and is looking forward to the challenge of taking on European opposition once again.

Last year, The Hoops progressed to the second qualifying round by defeating F.C. Progrés Niederkorn from Luxembourg before crashing out in disappointing circumstances to Odds BK of Norway.

Elsewhere for Irish clubs in the Europa League, Cork City will make the relatively short journey to Belfast to take on Linfield while St. Patrick’s Athletic were paired with Jeunesse Esch of Luxembourg.

Meanwhile, in the Champions League, Dundalk will travel to Iceland to face FH Hafnarfjordur who have been champions of their domestic league seven times out of the last 12 seasons.