Ronan Finn came back to haunt his former side with a man of the match performance as Dundalk maintained their 100% away record in the league by securing a 2-0 victory over 10-man Shamrock Rovers at Tallaght Stadium.

The home side came out seeking a victory that would see them close the gap on league leaders Dundalk to a solitary point but instead lie seven points behind the current champions after a match which saw their captain Gary McCabe given his marching orders after 31 minutes. 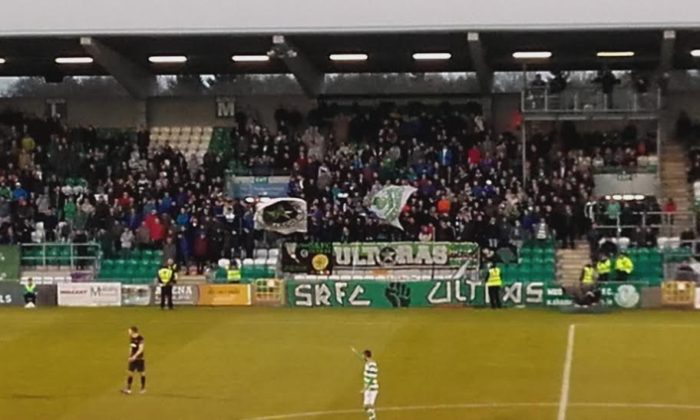 Rovers started brightly and it was they who produced the first attack of the game when Simon Madden played a through ball to Michael Drennan who was flagged offside.

It wasn’t long before Dundalk began to take a stranglehold on the game and they were given their just rewards in the 15th minute when a low Darren Meenan ball into the area took an unfortunate bounce off the leg of Hoops defender David Webster.

The Lilywhites threatened to double their lead 12 minutes later when Daryl Horgan jinked through the Rovers defence before David McMillan shot wide from the resulting pass.

Things got worse for the home side just after the half hour when captain McCabe was shown a straight red card for a mistimed tackle on his Dundalk counterpart Stephen O’Donnell.

He could have no arguments and his side were now a man down as well as a goal down with just one third of the game completed.

Nobody will have been more frustrated at McCabe than his manager Pat Fenlon who had this to say to Back Page Football after the final whistle:

I spoke to Gary. He knows how I feel. I’m sure he feels disappointed himself.

When pressed on how Fenlon himself felt about McCabe’s actions, the Hoops boss added:

That will stay between me and Gary, I suppose.

Despite the setback, Rovers managed to keep the score at 1-0 going into the half-time break.

Any words of inspiration that Fenlon would have provided his troops at the interval were wiped out rather quickly as just two minutes into the second half, Dundalk went 2-0 up.

Meenan was involved again as he headed down Horgan’s cross into the path of Finn who was on hand to calmly seal his sixth goal of the season. It was a form of vindication for the former Rovers midfielder who was booed and jeered throughout by the home support.

Now two goals down and playing against a side with an extra man, Fenlon brought striker Danny North into the fray in an attempt to pull a goal back but Dundalk still looked more likely to add a third.

On 67 minutes, good work from Finn and McMillan led to a Horgan shot being blocked on the line by Rovers’ French defender Maxime Blanchard.

Ten minutes later, two of Dundalk’s substitutes combined as Patrick McEleney got past his marker before crossing to Robbie Benson whose header proved fruitless.

Rovers were by no means outplayed and onlookers will ask how the game would have played out had all 22 players remained on the field.

In injury time, frustrations threatened to spill over again as Killian Brennan was booked for a foul on Finn just outside the box. Dane Massey’s free-kick bounced off the Rovers wall at which point the referee blew the final whistle.

A crucial three points for Dundalk who are now eight league games unbeaten against Rovers, a run dating back to May 2013.

The Lilywhites’ quest for a third successive Premier Division title remains on track as they sit two points clear of Derry City and five clear of Galway United. Both sides also won on Friday night, 1-0 against Bohemians and 2-0 against Wexford Youths respectively.

Next up for Stephen Kenny’s Dundalk, a return to Dublin to face an out-of-form Bohs at Dalymount Park next Friday.

Not such a long turnover for Fenlon’s Shamrock Rovers side who must travel to Cork City on Monday to play out a fixture that was recently postponed due to international call-ups.

A game in hand it may be, but returning to Dublin without the three points will leave Rovers’ title prospects looking shaky even at this early stage of the season.

Afterwards, Fenlon was pragmatic in defeat and preferred to look forward rather than back.

I don’t get too carried away with winning matches or too disappointed when we lose them. It’s my job to get the players in on Sunday morning and get them ready to play. They know they’re in for a tough game Monday.

With no draws in their opening eight Premier Division games and given Rovers’ recent trend in the league of following up a defeat with a victory, Fenlon will be hopeful that this sequence continues on Monday night.

Watch both goals from the game below.

An own goal from David Webster has given Dundalk a 1-0 lead away to Shamrock Rovers. Live coverage on RTÉ 2https://t.co/a0HqtduDDI

Ronan Finn comes back to haunt his former side as he doubles the @dundalkfc lead against @shamrockrovers.https://t.co/sImEGj63Hw