As we head into the busy Christmas period when Premier League games come thick and fast, it can be a make or break few weeks for fantasy football managers.

If you are clinging on to a wildcard since the first week of the season then now is the time to bite the bullet before it expires on December 30.

Don’t fret though because you’ll be given a brand spanking new one to use during the second half of the campaign.

With Chelsea looking the goods at the top of the table, and you can get on them for the title with a Coral bonus code on bettingexpert, it’s understandable that managers will want to shoehorn as many of their players into the team as possible.

Liverpool have been blazing a trail in the attacking third, while Manchester City’s defensive frailties have seen John Stones’ stock plummet, and Zlatan Ibrahimovic is now finding the net on a regular basis.

So who should you be looking to target with your winter war chest? We’ve come up with a list of four players who may tickle your fancy.

Note: Prices are at the time of writing.

There haven’t been many bright spots for Sunderland this season but young goalkeeper Jordan Pickford is definitely one of them.

Of the top 20 points scoring goalkeepers so far this season, Pickford comes in at tenth and is the cheapest of the lot at 4.2m.

You may not trust him to play every game given Sunderland’s current position in the relegation zone but you can be certain that the 22-year-old will face a lot of shots.

Indeed, only Burnley’s Tom Heaton ranks higher in terms of saves made so far. 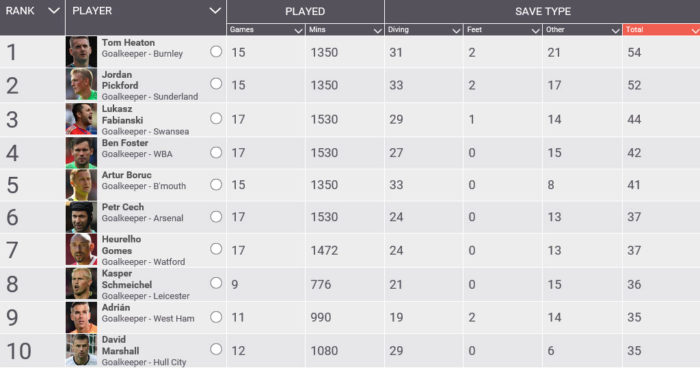 At the time of writing, Marcos Alonso (73) has scored less points than fellow Chelsea defenders Cesar Azpilicueta (89) and Gary Cahill (82).

However, the 25-year-old didn’t start for the Blues until the third game of the campaign and has gone on to play every minute as a wing back in Antonio Conte’s 3-4-3 system.

Thanks to Chelsea’s penchant for clean sheets, Alonso has scored less than six points only once in the last 11 games, and his ability to get forward has seen him chip in with a couple of assists and bonus points along the way.

If Chelsea’s defence remains resolute then having one of their regular starters is a must, and Alonso comes with the added bonus of playing higher up the pitch than Azpilicueta and Cahill.

Tottenham Hotspur away aside, Chelsea’s upcoming fixtures suggest that their excellent run could continue for some time yet.

Finding cheap midfielders to offset the likes of Kevin De Bruyne and Alexis Sanchez can be a challenge but West Brom’s Matt Phillips has stepped up to the plate.

The 25-year-old moved to The Hawthorns from Queens Park Rangers in July and has missed just one Premier League game so far – the 4-0 drubbing at home by Manchester City.

At just 5.5m, Phillips is the perfect option to have in your midfield rotation given the Baggies’ decent form and his point scoring ability – he’s bagged 50 in his last seven outings.

Once they get over a trip to Arsneal on Boxing Day, five of West Brom’s next six games are against Southampton, Hull City, Sunderland, Middlesbrough and Stoke City.

Now is the time to get on the Divock Origi bandwagon before his value rises any further – he began at 7m, plummeted to 6.5m, and his now recovered to 6.8m following some solid performances.

With Philippe Coutinho out injured and Daniel Sturridge likely to break down again at any moment, the Belgian has taken his chance to lead the line with aplomb.

Even when Coutinho’s returns to the fold, Jurgen Klopp will still have a void to fill as Sadio Mane is set to head off to the African Cup of Nations with Senegal in January.

Up to Monday’s Merseyside Derby, Origi had scored in four successive games and he benefitting from a supporting cast that creates countless opportunities in front of goal.

The downside to picking up Origi at this point is Liverpool’s upcoming fixtures – they face Manchester City, Manchester United and Chelsea over the next month or so.