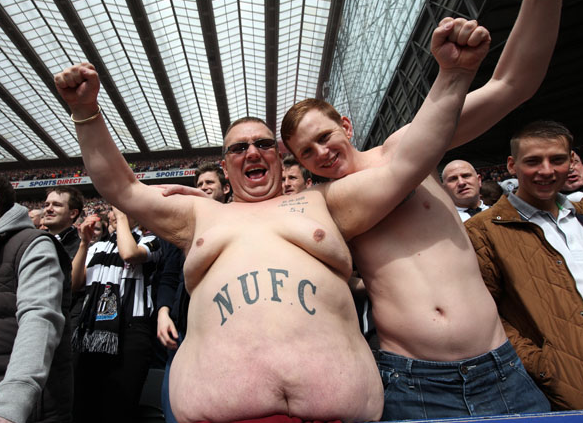 Fan unity is in the spotlight again. First came ‘Against Modern Football’ – unifying  15 year olds sick to the back teeth of football no longer being like the 80s, then in the last week or so fans of clubs the length of the country have united to campaign against ticket prices in the Premier League. Just this weekend Brian Reade wrote about the Joe Kinnear situation at Newcastle and stated that, rather than finding the whole thing hilarious, he instead could not help but feel sympathy for those most affected – the Newcastle fans. How can fans as a whole sit there and rejoice as a club is ripped apart? All very admirable, I’m sure you will agree.

To be honest though, I find it hard to share common ground with other football fans. Personally, I found (and continue to find) the whole Joe Kinnear thing hilarious. If it was up to me I would have his TalkSport interview set as everybody’s alarm call of a morning in its twelve minute entirety. I would have him appointed player manager at Newcastle and given his own weekly sports round up and cookery show beamed across all channels for the duration of prime time. Unlike Brian Reade, when I sit back and think about the whole episode again, my mind does not focus on a Newcastle die hard who has pumped over £500 into his club every year for the last 10 years, watching on teary eyed as his club continues to slide ever closer to another relegation, rather I think of the big fat shirtless idiot who takes his shirt off in January or raises his shoe above his head when his team scores. Then I laugh and listen to Joe Kinnear talk about Yohan Kebabs and Hatem Ben Athlete again.

When the ‘Spirit of Shankly’ (sick in mouth gesture here) fan group proudly holds aloft a banner, dismayed at people watching football in a pub rather than going to local stadiums I don’t pump my fist in unity, I remember hundreds of Liverpool fans waving Tesco bags at Goodison Park as Everton faced up to the very real prospect of moving to a new ground out of the city boundaries, financed by the supermarket chain.

When FC United fans cry over debt/increased prices, I don’t don a yellow and green scarf, I just think back to their fans lording it over opposition clubs they’ve consistently tapped up star players from to strengthen their position and weaken others.

When I go to the match myself I don’t look around in awe at thirty five thousand plus fans like they are my brothers and sisters. I look at the 50 year old in the new club shirt (too small) and listen to his son scream at the manager to make a change (after five minutes) and daydream about picking the two up and hurling them down the stairs. I laugh as my captain tries to pass the ball forward and trips over his own feet. That’s not to say I don’t care, I do. But to ‘unite’ with my ‘fellow football fan’ (copyright: morons) I need to feel some kind of empathy and similarity with them.

As a result, in search of some common ground and with a wish to join in all things protesty and togethery, I’ve compiled a list of yellow and red card fan offences for the upcoming season. Collect five yellow cards and give up your seat for a match. A straight red and you miss your clubs next three matches. If all goes to plan, I’ll be there next year, arm in arm with my fellow fans chanting ‘why can’t we be friends?’ and cheering on a Premier League XI in a winner takes all match against a Money Elect.

Come on fellow fans, we can do it. Let’s make football grounds a better place to be. If all else fails, piss yourself laughing as one of your rivals stands on the brink of oblivion. They’re your rivals, after all. Oh, and get out of the pub you fiend!