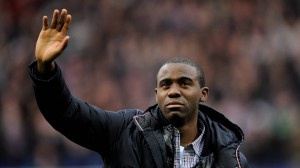 The 17th of March may be St.Patrick’s Day, however for football fans it represents a rather more prudent and emotional experience.

Two years ago on this day, in an FA Cup quarter-final tie between Tottenham Hotspur and Bolton Wanderers, the away side’s number six Fabrice Muamba collapsed off the ball.

Muamba had suffered a cardiac arrest, which plunged his life into danger.

Over 30,000 spectators at White Hart Lane, and millions more watching on their television screens, looked on as Muamba’s fate became ever more unclear.

Bolton and Tottenham players alike turned away in distress, confused and worried for their fellow professional, as attempts to revive Muamba were desperately made.

A consultant cardiologist, who entered the stadium 45 minutes earlier expecting to watch a good game of football, ran onto the pitch and aided the St.John’s ambulance crew who were already in attendance.

As Muamba was taken off on a stretcher and straight into an ambulance, attempts to save his life were still being made, with reports afterwards saying that defibrillators were being used to try and restart the midfielder’s heart.

Incredibly, the fantastic team at the coronary unit were able to restart Muamba’s heart, and two days later his heart was beating without medication, and he was able to move his limbs.

A further two days passed by which time his consultant commented that Muamba’s progress had exceeded expectations, and that “a normal life is within the spectrum of possibility”.

On the 15th August 2012, Bolton Wanderers announced Muamba was retiring from professional football. Muamba had this to say:

“Since suffering my heart attack and being discharged from hospital, I have remained utterly positive in the belief I could one day resume my playing career and play for Bolton Wanderers once again. As part of my on-going recovery, last week I travelled to Belgium to seek further medical advice from a leading cardiologist. But the news I received was obviously not what I had hoped it would be and it means I am now announcing my retirement from professional football. Football has been my life since I was a teenage boy and it has given me so many opportunities. Above all else, I love the game and count myself very lucky to have been able to play at the highest level. While the news is devastating, I have much to be thankful for. I thank God that I am alive and I pay tribute once again to the members of the medical team who never gave up on me. I would also like to thank everyone who has supported me throughout my career, and the Bolton fans who have been incredible. I am blessed to have the support of my family and friends at this time.”

On Thursday 8th November 2012, Muamba inspired many and evoked a strong emotional reaction from the football world as he returned to White Hart Lane for the first time since he suffered an almost-tragic event:

Ever since Muamba was able to leave the hospital, he has been a fantastic, dedicated, persistent advocate of cardiac awareness – informing the world of potential heart problems people may face, in particular sportsmen like himself.

He has supported the increase in frequency and availability of defibrillators around football grounds in order for us to be better equipped for a similar event should it unfortunately occur.

Muamba, and what he has been through, personifies football. It demonstrates the passion, emotion and desire of the fans, there were millions around the world sending their wishes, players wearing t-shirts in warm ups, and supporters at the grounds displaying their will for Muamba to pull through.

In those uneasy two days after the event when Muamba’s life was thrown into question, there was relentless and incredible support. He did pull through in the end and we can take that as a testament to his character and his passion for the game.

It does serve as a warning, that the public need to be better aware of the potential cardiac risks of sport, but at the same time provides a wonderful example of how football can bring people together.