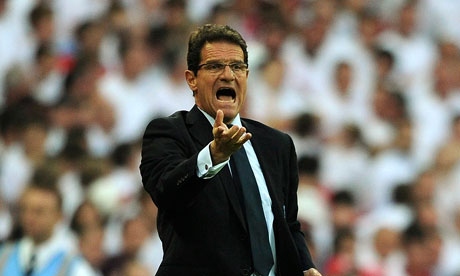 Non Capisco. Italian for ‘I do not understand.’ An apt remark considering I find myself uttering those few words when attempting to comprehend the reasoning behind this national dislike that has befallen Fabio Capello’s tenure as England Head Coach.

The Italian manager took up the unenviable post back in January 2008 and three years on he appears to have done little to boost his popularity amongst both the dismissive English media and unrepentant England fans. The problem with some English fans is that they fail to see the bigger picture; if your name is not Harry Redknapp then you are more than likely going to be subjected to tirades of unfounded abuse from English football fans. Unfortunately an ever increasing proportion of fans are turning against Capello for his mishandling of seemingly irrelevant managerial decisions. The media have taken this abhorrent approach towards Capello as they attempt to expose any weakness in the Italian.

So why is it that here in England Fabio Capello’s achievements are failing to endear him to the English fans? Perhaps the following fitting statement explains just why so many people are so quick to denounce Capello.

If ever you want to gage the intelligence of an English football fan, just ask them about Italian football.

Now I do not claim to be an expert on Italian football, but I certainly know enough about Serie A as a league that qualifies me to criticise fellow supporters. Staunch Premier League fans are adamant that we host the greatest club league in the world, and because some choose to take such a hard line stance they continually make disparaging remarks about other respective European League. I could once be found guilty of reiterating the words of so many by saying that there is nothing exiting about Italian football, it is too defensive and the pace of the game is sluggish. Yet as my desire to engage more with cultural side of football has lead me to amend my attitude and embrace the passion that exists in Italian football.

Due to the negative stigma that surrounds Italian football here in England, Fabio Capello was always going to find it difficult to convince ardent supporters that he is capable of rekindling the spirit within our ailing national team. The sixty-four year old Italian has managed four of Europe’s biggest clubs, AC Milan, Real Madrid, Roma and Juventus. During his time at each of the respective clubs he has won a total of eight league titles, five domestic trophies and two titles in European competitions, including the prestigious Champions League crown. No doubt the counter argument to Capello’s achievements will be that he has only achieved success at club level and therefore is ill equipped to deal with demand of the International game. Admittedly for a manager, replicating club success on a national stage is not straightforward, but why can we not bring ourselves to congratulate Capello every now and then?

Despite England’s shambolic performances at the World Cup last year in South Africa, I don’t think it is fair to laden the blame on Capello, our failings on the world stage can be largely attributed to the existence of over inflated egos within the dressing room. Thus far England’s European Championship campaign has been near faultless, despite somewhat lackluster performances England are top of the group and after beating Wales and playing well against Ghana, I think we need to laud a certain degree of praise upon Capello as he appears to be answering the cries of England fans and selecting players based upon merit and current form rather than the club they play for. There is a new breed of English talent emerging, Joe Hart, Gary Cahill, Jack Wilshire, Matt Jarvis and Andy Carroll have all been handed an opportunity in which to represent their country. It is up to Capello to nurture that talent and prepare them for major International tournaments.

At present Fabio Capello looks set to relinquish his duties as England head coach after the 2012 European Championships, but who knows where our national side will be in twelve months time.Whether you believe in Capello or not, I reckon that if there is one aspect that we can all agree upon, that the Football Association have been totally exposed as incompetent imbeciles, who are  clearly incapable of managing football in this country. Rather than Fabio Capello being judged for the astronomical annual sums of money his is pocketing during his tenure, perhaps we should be scrutinising just why the FA board members are making such flawed decisions and still picking up their handsome pay cheques at the end of each month.