Liversedge Football Club is one of those places that you can’t find unless you know where it is. with the sort of directions that will confuse you completely if delivered by a local.

Oh, Clayborn, it’s a left out of Cleckheaton bus station, second left into Hightown Road, and the half mile walk (all uphill, mind) until you see a dirt track on your left. That’s Quaker Lane. Can’t miss it.

To be honest, these rank with ‘Kiss Me, Hardy’ as fateful last words But a shaky sense of direction aided by the A-Z lead me to a sign saying ‘Liversedge FC’, and the wonderfully rural enclosure that is home to a club formed in 1910. 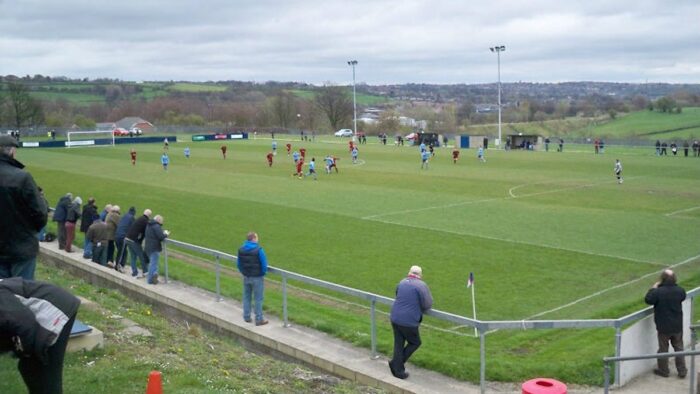 Today is quite special. With COVID-19 as a context, both Liversedge of the Northern Counties (East) League and their Northern League visitors Newcastle Benfield, have overcome ‘challenging’ (i.e. difficult) circumstances to stage this FA Vase first round tie. With two coaches expected from Tyneside, I book my ticket early in the week – it’s number 82 of a possible 300.

The lockdown has encouraged the use of technology. ‘Sedge’s slick operation (via Ticketlight) enables easy online booking and the ticket’s colour depiction of Wembley Stadium with the FA Vase in the foreground, is a fine complement to the match programme. With my inner anorak satisfied, I head for the bar.

Today’s trip out – people have travelled from Bradford, Oldham and further to be here – is a breath of air for those deprived of a Saturday fix or simple human contact. In the bar we swap stories of triumph and disaster; West Ham’s 6-0 surrender on the Boundary Park plastic thirty years ago being a particular favourite. Pleasure-seeking neutrals are out in force, and with 300 in attendance the game is sold out before kick-off.

Pre-match pints in the clubhouse are a feature of semi-pro football, as are quirky, unguarded entries in the match programme. In his player profile, ‘Sedge skipper Kevy Tarangadzo, a former Congo international, cites Jamie Carragher as The Person He Would Least Like To Meet; “He was just a rubbish player”, says Kevy; a level of honesty you possibly wouldn’t get on Soccer Saturday. Today’s referee Dean Grant meanwhile, wants VAR to be scrapped. I like him already.

Few grounds, I’d wager, give the spectator as panoramic a view of the countryside as Clayborn. The elevated clubhouse and benches outside offer a beer in full view of the pitch, with the Spen Valley beyond; an experience exclusive to this ground and this level of football. Clayborn’s precipitous slope was removed with the proceeds of the 2004-05 FA Cup run when ‘Sedge came within a disallowed goal of the first round. A near-record 828 saw them dominate opponents Coalville Town to little effect, before losing the replay after the goal-less draw in Yorkshire. 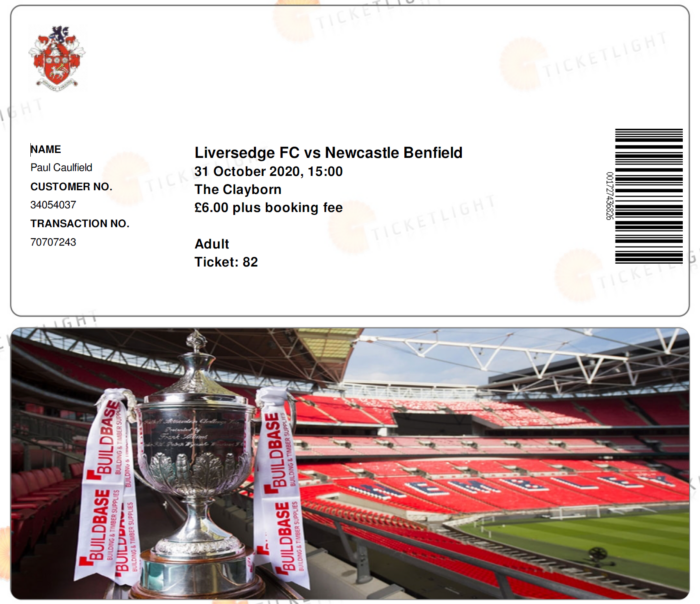 No such outcome is possible today, as the dreaded ‘straight to penalties’ will operate if the scores finish level. And with extra time inexplicably ruled out in the Vase and Trophy, it seems the authorities are tacitly encouraging shoot-outs to settle cup ties. With football’s record of trialling potentially unpopular measures at a level where they’ll hopefully go unnoticed, and the COVID-enforced ban on replays this season likely to endure, it seems all FA tournaments are being demeaned this way.

The visitors were FA Vase quarter finalists in 2006, and Northern League sides were winners four years running from 2007-11, until their strongest clubs were obliged to take promotion to a level where the Vase was no longer an option. Liversedge’s Vase record is modest and though Benfield beat them comfortably in the competition three years ago, the home side’s perfect league record (six wins from six) suggests today might be different

So it proves. A 23rd minute opener from Liversedge’s ex-Bradford PA striker Nicky Boshell is cancelled out by Peter Glen-Ravenhill for Benfield before Paul Brayson puts them ahead just after half time. The visitors are favourites at this point, but Boshell’s second on the hour turns the game ‘Sedge’s way, and further strikes from Oliver Fearon, skipper Tarangadzo and Joe Walton, put a comfortable 5-2 spin on a tricky tie for the home side.

Liversedge are in the second round for the first time in 15 years, but celebrations are stymied that evening as Boris announces a four-week lockdown that puts paid to local football. While ‘elite’ sport (and the National League) can continue behind closed doors, this doesn’t include community clubs with rural vistas, however attractive.

The following Tuesday, Northern Counties (East) League secretary Matt Jones tweets a ‘stay safe’ message to volunteers and supporters in the hope of December restart, just in time for the Vase third round – if we get that far. Team training is banned in the interim, and with residual rust levelling things up, the results could be interesting.