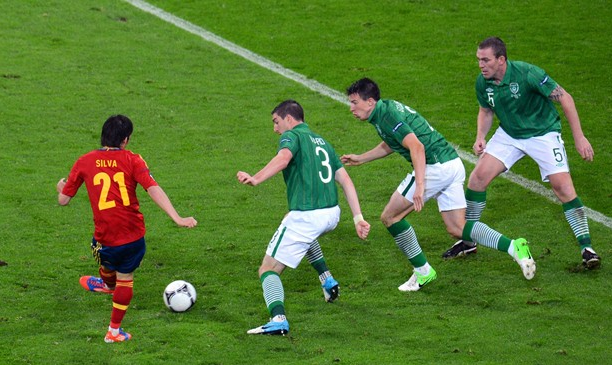 Roy, Roy, Roy. Everything you said made sense but the timing was wrong.  It’s like making a speech at a wedding and reminding everyone about divorce statistics and saying how the groom’s first girlfriend was really his true love.

There are some things that people just don’t want to hear and there are times when you just shouldn’t interrupt the ceremony.

However, maybe the reason that Keane’s comments annoyed people was because we know that he’s right. On one level anyway. The tournament was an unmitigated disaster for us and the gulf in class between ‘us’ and ‘them’ was all too apparent. Depressingly so.

With almost half of the first match still left to play, we knew the game was up and that this would be the tournament that would show us up for the pretenders we are – no hope of a giant-killing, era-defining moment to rival Ronnie Whelan and Ray Houghton’s goals in Euro 88 and USA 94.

They (whoever ‘they’ are) say that the league table doesn’t lie – well, unfortunately, FIFA rankings do. It is nonsensical for us to be 18th in the world when we haven’t beaten anybody ranked above us since September 2001. Lucky clean sheets and workmanlike victories against poor opposition have helped to paint a distorted picture of the ability of this Ireland team.

The old argument that we’d be more up for the fight than our opponents and scrape a result through sheer grit and determination just doesn’t ring true these days.

As many commentators have pointed out, there’s no chance that Glenn Whelan works any harder than Luka Modric, Andrea Pirlo or Andres Iniesta. Iniesta is one of the most celebrated and decorated footballers of his generation for a reason – that reason being that the grit and determination that some people foolishly believe can tip the scales in Ireland’s favour against more technical and skilful opponents such as Spain are the starting point of his exquisite array of talents, not the sum total of them.

‘They’ also say that fortune favours the brave. Conversely, however, it also rings true that the brave are often prone to getting slaughtered if they don’t have a coherent plan of action and it is clearly the latter, more pessimistic attitude that Trapattoni buys into.

Granted, his selection pool is limited in terms of talented personnel (indeed in terms of both talent and personnel), yet he has made some very negative decisions during his four years at the helm – decisions that have deprived the team of imaginative and inventive players just when we need them most.

Trapattoni however, is a great believer in pragmatism and he preaches a mantra of keeping things simple and compact and never strays far from the tried and tested 4-4-2 system that has served him so well throughout his managerial career. Prior to the tournament, the Irish players talked the talk and the record books showed off our impressive defensive record. Accordingly, fans were almost expecting a heroic shut-out akin to the miraculous clean sheet that we recorded during the 0-0 draw with Russia last autumn. Maybe we could even sneak a goal or two and then our dream of progressing from the group stages might be looking more like a reality…

Managers who promote a more expansive and expressive playing style than our steadfast Don Trap will always maintain that attack is the best form of defence: if you’re on the front foot, in possession of the ball in your opponents’ half, then they can’t hurt you. It makes sense and we all know it.

Unfortunately, what we also now know is that defence can never be the best form of attack. Keeping things tight and hoping to nick a goal on the counter or from a set piece is all well and good in theory but that plan relies on the assumption that you can actually keep a clean sheet. However, when you find your team conceding goals in the opening minutes of each half and have no Plan B then it’s going to be a long night and a depressing and deflating defeat is inevitable.

The Irish fans ironically sang about ‘a team of Gary Breens’ but what we really need is a team of Roy Keanes. Unfortunately for us, however, Roy was in the TV studio and the wrath and ire that were so inspirational and effective whenever he took to the playing field in an Ireland shirt were somewhat misplaced and misunderstood and, accordingly, his comments were misinterpreted as an attack on the fans.

I’m sure that Roy Keane was as proud as anybody of our fans’ poignant performance during the closing stages of our Spanish mauling. What he was speaking out against was what he saw as the small-mindedness, the ‘sure, aren’t we great to even be here’ attitude and the celebration of mediocrity that has long characterised our country. He is right to speak out against it and to dream of a better future; one where we possess a winning mentality, where we demand to be taken seriously and where we harbour genuine hopes of making an impact on the pitch rather than in the stands.

However, what he was wrong about was saying that the fans themselves harboured no ambition and were happy for the team just to be there. We were not patting our under-performing players on the back and embracing our mediocrity – far from it. We were celebrating ourselves and our country.

As the third Spanish goal went in, I looked around the stadium and saw literally hundreds of Ireland flags draped over the stands and thousands upon thousands of fans decked out from head to toe in green, white and orange, complete with painted faces, inflatable rubber hammers and leprechaun hats. The whole stadium was a sea of green, drowning out the small pools of Spanish rioja that had poured into witness the masterful matadors put our lumbering, cloven-hoofed bulls to the sword with their swift and incisive artistry. I wondered what our support would be like if we had cause for genuine optimism or ever had something to actually celebrate and I felt an immense sense of pride in Ireland and its people.

A similar feeling appears to have permeated every Irish person in the stadium (and, ultimately, simply every person in the stadium) and what resulted was simply one of the most beautiful shows of spontaneous patriotism ever witnessed in a sporting arena – somehow managing to be heart-warming in both its boisterousness and its poignancy.

The media around the world marvelled and every single person in that stadium that night knew that they had been part of something truly unique and spectacular.

That’s what happened, Roy. Or at least that’s how I saw it… I was singing for myself and I was singing for my country and I have never been more proud to be Irish despite our pitiful performance and our meek retreat from Poland. Football didn’t really come into it. It was simply a time to celebrate ourselves. As Keane’s great guru, Bob Dylan, once sang: “when all else fails/ I’ll make it a matter of self-respect”.

An out-and-out winner like Keane will always share Bill Shankly’s belief that football is much more important than life or death. Such a mantra may imbue players with a sense of power and purpose and help them summon up every last ounce of energy and strength when they take to the pitch. Fans, however, can’t directly affect what happens on the field and, as such, have a different role to play and this is something that Keane seems to have glossed over in his comments. For, if football really were a matter of life and death, we’d all have died a thousand times over at this stage.

A group of Spanish fans that I spoke with after the game told me that while many Spanish fans are renowned for their passionate and vocal support of their teams, they are also notoriously fickle and will march out in disgust if their team goes two goals down. It seems that they often epitomise the ‘only sing when you’re winning’-style mindset of fair-weather, bandwagon-jumping fans. That is why they were so awestruck by our unwavering support and joined in themselves.

So, even though the praise for Ireland’s fans has ranged from the saccharine to the down-right condescending via the in-between where the truth really lies, it remains comforting to know that while the Spanish may have mastered the beautiful game, it’s fair to say that nobody does a beautiful hames quite like the Irish.