With all but 3 of the squad plying their trade in the Russian Premier League, the media here are beginning to do something not unfamiliar to their English counterparts. From battling to qualify from a strong group, the Russians are suddenly among the favourites, just after Spain, Holland and Germany, according to the locals. The frustration and criticism from the qualifying campaign is  long forgotten as now it’s a case of rally behind Dick and the boys for a charge to glory. Yet some voices will not be silenced. The “Dick out” protests from the qualifiers won’t happen with the middle class (mainly) travellers to the Euros, though come the next home game, it could be hell.

One gap in the Dutchman’s program has been his failure to lessen the age and improve the quality of the squad. His ignorance of clubs and players outside a small group is inexcusable. When Rubin Kazan were competing with the best in Europe he almost resolutely refused to call up any players from Tatarstan. The political divide in Russian football directed his decision-making, to many observers, the Moscow-St. Petersburg battle played out alongside the powerbrokers in Russian football’s machinations. Until very recently, unless a player was employed by CSKA Moscow or Zenit St. Petersburg, he stood little chance of getting a cap, let alone a run in the team. This has loosened somewhat with transfers and injury, though there is still a concentration on players coming from the capital or second city. So what of the squad and who should be in it. 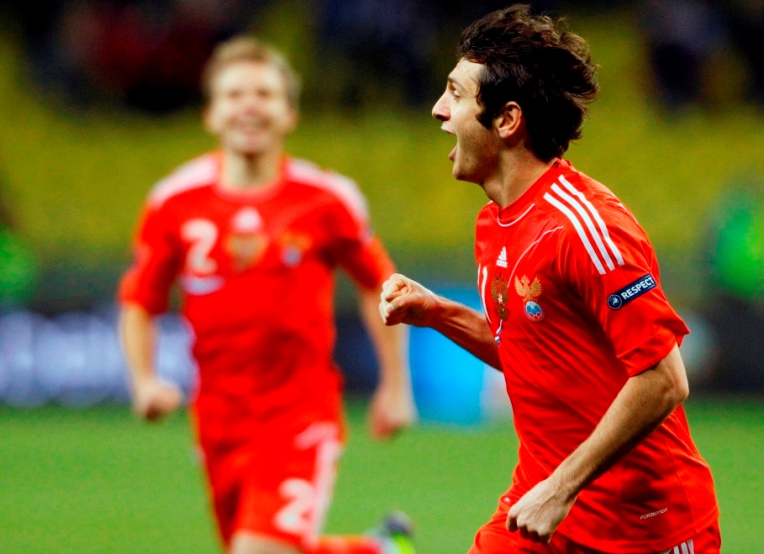 Once Igor Akinfeev returned to partial fitness, he was in. Of course the underperforming (but league winning) Malafeev had to go, while Dynamo’s Anton Shunin’s choice of agent made sure he is in the squad at the expense of the most impressive keeper this season Vladimir Glabulov. The Anzhi keepers great crime was to leave Moscow and his agent behind in search of glory and fortune, he got a good scoop of the latter. So long as Akinfeev remains healthy Russia can at least be sure of a decent shot stopper with only the occasional howler. The nation dreads if Malafeev has to step between the sticks.

Russia’s defence looks a little better with one half of the glacially slow Berezutskiy’s, Vasili, not making the cut. If his brother also missed out many fans would be happier. Baffling was the decision to bring in the uncapped Granat of Dynamo. Born out in the Republic of Buryatia he was a budding star in the Siberian zone of the 2nd Division before a publicised transfer to Dynamo. However his career has been stop start and while he’s versatile (playing at left or centre back), at 25 he might not get a run out. Spartak’s Dmitri Kombarov offers an attacking option on the left, though he is too often caught on breaks and might not be trusted. Often overlooked and underused Roman Sharonov has been one of the best central defenders in Russia, turning 36 in September this is his only realistic chance at playing in an international tournament and if Advocaat finally sees sense he will stick the dominating Rubin Kazan captain at the heart of his defence. Ignashevich of CSKA has been good this season but against Inter last September he was one of the worst players on the pitch. Anyukov is a coach favourite and despite carrying a knock will probably start and be a functional option. Zhirkov’s move from Chelsea to Anzhi was a talking point of the season, moreso than that of Eto’o. The Tambov man turned in some good performances but was booed during away matches for seeming to go to a money club, as opposed to a big money club like Zenit or Spartak. His versatility means he will start and his good form should translate to Poland. The final defensive spot is taken by a very dogged Kirill Nababkin who will be more certain of a place in the World Cup qualifiers, though he will not look out of place should he be called upon this Summer.

In midfield Russia are mainly staffed by Dick’s boys from the north-west, Shirokov, Denisov and Zyryanov. This trio can make the team tick if they don’t have to live in Andrey Arshavin’s shadow. Since the Arsenal/Zenit player will lead the side, his team-mates will have to take a back seat and feed him. Worrying recent news that Sporting Lisbon’s Marat Izmailov was injured in training could mean a straight fight between Semshov and Dzagoev for a starting spot. The more experienced Semshov has the ability to be a matchwinner, though media, political and agent pressure means that the Beslan-born youngster should start. His free-kicks, while deadly, take the focus away from his selfishness and lack of work ethic, though this could be a big summer for him with moves to bigger leagues in Europe touted. Lokomotiv’s Denis Glushakov grabbed a midfield spot ahead of the classy and dangerous Ryazantsev. The Rubin winger has been outstanding at home and in Europe, though will have to wait for the new boss to get a deserved run. Glushakov is an experienced player who won’t let himself down, though he lacks the ability to impose himself on matches.

There is an abundance of striking talent in Russia and not all of it foreign. True top clubs seem to prefer entrust goalscoring duties to non-Russians, though this is not a fair reflection of the true nature of football in Russia. Attacking players are restrained to keep the ball, make easy passes and coaches tell strikers to walk the ball into the goal. It can be depressing but the close control from Premier down does speak volumes about the technical ability of local players. Roman Pavlyuchenko may not have been to Harry Redknapp’s liking at Spurs, though he did find a return to his old Spartak form since coming home. The striker is the perfect foil for Andrei Arshavin, though he is not sure of starting with Fulham’s Pavel Pogrebnyak a genuine threat. The big target man has shown skill beyond expectations in England and if he gets a fair crack from the coach might be a nice bet to finish as tournament top scorer with 3-4 goals. He is more than capable though would be better off paired with Zenit’s moody but able Kerzhakov. Kerzhakov, who seemed to derail Ireland’s qualifying tilt in Dublin, can be brilliant or brutal. He will always get leeway from the Dutchman and for Russia to be a real threat, a front pairing with Progrebnyak would be productive. Also ran Alexsandr Kokorin is in for the future, despite playing over 100 matches for Dynamo Moscow. He is not deployed purely as a striker at times, though his ability to run at defences means a late run out in tight matches could be regular. He’s fearless, confident and would be well up to the level needed. Spartak’s young gun Artem Dzyuba is unlucky to has missed out, especially as he is a goal threat with ice in his veins, while Sergei Davydov’s lack of goals in 2012 put paid to his chances. The big striker was excellent up to December, though a move from Kuban to Rubin seems to have knocked his confidence.

So how will the Russians fare? Their group is tight but winnable. The team are not as strong as they believe, not as bad as some critics would have. They can target wins against Poland and Greece, though the Czech match could come too soon for them. Mentally the team will suffer from the intense media pressure they are bound to come under. The talisman, Arshavin, can be brilliant, though with a tight marker and a few belts, he’ll look for the easy options and disappear when most needed. A protest by his team mates at a threatened removal of the armband seemed to have galvanised the players, though for how long remains to be seen. The coach is staking everything on his former playmaker at club level rediscovering the form of 2008. Arshavin is one of the few actual international class players in the Russian side, though if he can forget advertising crisps, printers and toilet roll (to name but three), he will lead Russia into the quarters, and beyond.