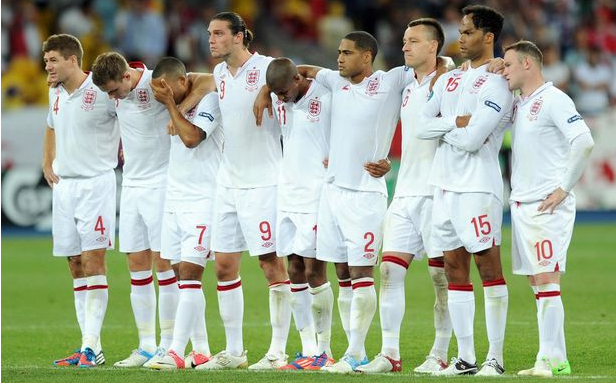 As widely reported before the start of Euro 2012 this was the least heralded squad of players ever assembled to represent England at a major tournament and as the squad departed for their base in Krakow fans expectations were at an all time low.

For good reason, Rooney was suspended for two games, injuries had hit hard with Wilshire, Lampard and Barry ruled out, while ego and footballing reasons accounted for Richards, Carrick and Ferdinand. With Lennon and Johnson overlooked for Downing, and the manager prepared to take a gamble on the talented but unproven Oxlaide-Chamberlain, the squad looked far from what was required to compete at a major finals.

Roy Hodgson was obviously aware of our limitations and decided on a defensive style of play consisting of two solid lines of four in a rigid 4-4-2 formation which would ensure we were hard to beat while looking to nick a goal. One nil wins against Belgium and Norway would have given him confidence his plan could work in the knowledge Chelsea had achieved success with a similar game plan in this seasons champions league.

On the whole the system deployed worked well as England progressed to the Quarter finals with 2 wins and a draw from their their group games. England looked overly dependent on Parker and Gerrard but otherwise Hodgson had used his substitutes well and against teams with their own limitations Gerrard had made the difference with that extra bit of quality in the final third.

The Italians were a different prospect, they knew what they were going to be up against and came up with tactics to combat our predictable formation. The early part of the game saw the Italians constantly trying to play balls in behind Englands defence as the Italian forwards tried to stretch Englands back four and create the space between the lines. With space created they then managed to get their players between the lines allowing Pirlo to sit deep and pick passes off at will. By playing high up the field when they misplaced a pass they could press quickly denying England the space to work the ball up the field.

The tactics worked perfectly and ensured the Italians produced a dominant display where only poor finishing meant the score somehow finished 0-0. It was crying out for Hodgson to change the system to play five in midfield to deny the Italians the time and space to pass the ball but with only Henderson available to him Englands lack of squad depth finally caught up with them. Instead he sat back and prayed for penalties and a change of fortune. It was depressing to see Pirlo time and again collect the ball in the centre of the field while watching our midfield retreat to their default position instead of pressing the ball. However with the options available Hodgson probably felt that was his best chance of success.

There is no shame going out in the quarter finals because when you look at the teams on paper that is where England should be and by winning the group this squad did better than expected. The challenge now is to adapt the system and add players with more attacking flair to bring success. If teams play high up the field like the Italians last night they leave acres of space behind them and we need players with power and pace to exploit it.

England have young players with talent and now is the time to make sure those players are given the chance to develop. The time of the so called golden generation has passed so we need to look to the future and bring those players through ready for the world cup in two years time. Wellbeck has proved he has a bright future and with the likes of Kyle Walker, Gary Cahill, Phil Jones, Oxlaide-Chamberlain, Adam Johnson, Jack Wilshere, Tom Cleverley and Daniel Sturridge England fans have much to look forward to.
Reply Forward