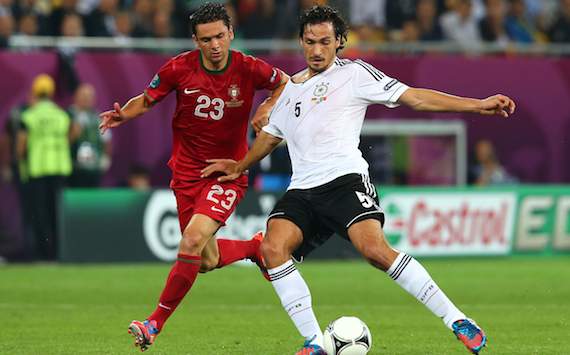 Germany are one of the favourites when it comes to Euro 2012 Tips, with the core of their defence looking stronger each game.

He has been one of the best central defenders for the last two seasons, but much of the footballing world will only begin noticing the German international, Mats Hummels during this summer’s European Championship. The son of former professional footballer and manager, Hermann Hummels, Mats started his career at the age of six with the Bayern Munich youth team, where his father worked as a youth coordinator for the club.

Mats learned his trade through the Munich academy system, spending fourteen years with the club. When it finally came time for him to get his chance with the first team it never happened. He spent a season on the bench, receiving just one appearance.

The next season he was sent on loan to Borussia Dortmund where he starred and quickly earned a starting place beside Neven Subotić, forming one of the most formidable partnerships in German football. The end of his loan was marred by injury, but Dortmund’s sports manager Michael Zorc had seen enough, and signed the twenty-year old from Bayern Munich. Since signing for the club, Hummels has helped Dortmund to their first title in nine seasons, winning the 2010-11 title with the best defensive record. This season he anchored an impressive Dortmund side to their second Bundesliga title in as many seasons as well as the DFB-Pokal title, beating out Hummels’ former club, Bayern Munich in both competitions.

Hummels has impressed with his country as well. At the U21 level he helped his country to win the 2009 European Football Championship, a tournament where he played defensive midfielder but received limited playing time before starting and impressing in the final where Germany won 4-0 against England. His senior team debut came against Malta in 2010 and has gone on to earn a regular starting place under Joachim Löw.

At Euro 2012, he is partnering Bayern Munich center back Holger Badstuber in defense, and the two twenty-three year olds have formed an impressive partnership already in the early stages of the tournament. His performance against Portugal was nothing less than man of the match quality. He finished the match with the most completed passes (58), most duels won (16), and most touches on the ball (85), a dynamic performance for a center back. His tackling, heading, and positioning is flawless, but the aspect of his game that impresses the most is his contributions to attack.

At six foot three inches he is a towering presence in both boxes, but he is at ease with the ball at his feet and is known for his runs up the center of the field and he plays with a grace that makes what he does on the pitch look effortless. He may be the world’s best modern sweeper or libero, a position created and made famous by Germany legend, Franz Beckenbauer. Two games into the tournament, Hummels leads all players with twenty tackles and interceptions. His performance in this tournament will have many of Europe’s top clubs clamouring for his services but he will not be cheap with Dortmund signing him to a contract extension just before Euro started, keeping him with the German champions until 2017. Mats Hummels will play a major role in any success Germany have this summer and beyond.

To read more from Caleb, visit his blog where he covers the next generation of Spanish footballers. You can also find him on Twitter .