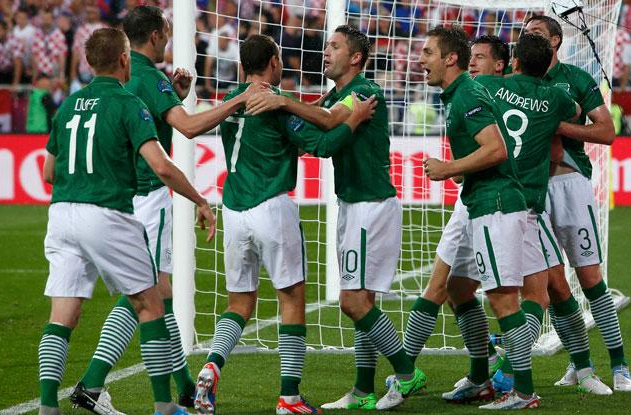 How can Ireland beat Spain? How can anyone beat Spain? An Act of God? It is a question almost as old as the game itself and only six managers have achieved this almost superhuman feat since November 2007.

So how do you beat them? With great difficulty obviously, but how can Ireland beat them is the real question?

Before you face Spain you have to face up to two important factors.

With that in mind you can start building a strategy to best Vicente Del Bosque and his almost unbeatable team.

Midfield is where Spain is strongest and no matter what team you field against them you will concede the middle ground. In football this is essentially the high ground in wartime tactics and as everyone knows – if you control this area you control the tempo of the battle.

For Ireland, competing against Spain in midfield is a no go area. There is no point what-so-ever in taking the battle to where you are weakest and where your opponent is strongest.

Conceding midfield is essential for Ireland especially when you consider the players they have at their disposal.

The four recognised central midfielders in Giovani Trappatoni’s squad are all similar type players. Glen Whelan, Keith Andrews, Darron Gibson and Paul Green are all “ordinary decent” players but none are going to compete against the likes of Xavi or Iniesta or Cesc Fabregas.

The key to this battle in midfield is mobility.

Vicente Del Bosque chose to go with six midfielders against Italy in their first group game, and for long periods they dominated. However, and most significantly, they were vulnerable to attacks down either flank and through quick direct attacks.

With that in mind, Ireland do not possess the players to attack Spain down the wings in the same manner as the Italian’s so utilizing a direct style, which is exactly how Ireland play anyway, while conceding midfield is the way to go.

To achieve this Giovani Trappatoni should opt for a 4-3-3 formation and forego the width in the Irish team that he usually strives to retain.

This is important for a couple of reasons.

Each one of Spain’s attacks begin at the back so going with three forwards against their four defenders will help close off many of Spain’s moves before they even begin. This, in theory, will force Iker Casillas to go slightly longer than he or his manager likes to.

If the ball is in the air and a 50/50 challenge can be made Ireland will be favourite to win these challenges because of their physical strength and height advantage.

The 4-3-3 formation would also lend towards playing three of four defensive central midfielders and given that Ireland will concede midfield these players will drop deep to support a four man back line against a six man midfield with no width.

Meaning that for Spain to find a way through they will either have to score from distance, against one of the best shot-stoppers in Europe, Shay Given, or pass the ball through a seven man forest which would be the equivalent of going through the eye of a needle.

Having chosen the tactics and formation, all Trappatoni has to choose is his players.

Shay Given is certain to start in goal, even with his recent injury worries. If the Lifford man can regain the form he is capable of, he could realistically hold the Spanish Armada off by himself so he must start.

At the back, Richard Dunne and Sean St. Ledger are the two best central defenders Trap has at his disposal so are also certain starters.

Leaving the fullbacks. The first change to be made is at left full. Stephen Ward had an extremely poor game against Croatia and is realistically only in the team because of the natural balance he provides. He should be replaced by Stephen Kelly who is an experienced Premier League fullback after his years with Spurs and Fulham and can play anywhere across the back, as can John O’Shea.

With that natural ability in mind, both players, Kelly and O’Shea should come in at right and left full respectively. From there they can help shuffle the team across the 18-yard-box where most of Spain’s attacks will come from and be comfortable in any position.

This defensive unit will be vital in holding the Spanish at bay. And as Spain pressurizes high up the pitch each player in the backline is most comfortable in playing fast and direct to a front line of three. Thus in effect, Ireland’s tactic will be to bypass midfield, and where Spain is strongest, completely.

For the midfield battle, Ireland needs players who are good defensively and who can mark zones. For this; Whelan, Andrews and Gibson are best suited with the latter duo also offering the potential for shots from well outside the box.

All three players play in defensive roles for their clubs so dropping deep to help their backline will be no different than an average Premiership weekend for them.

Up front is where Ireland will hope to hurt the Spanish backline who can be vulnerable from set-pieces and pace.

For his mobility and physicality, Johnathan Walters must be a certain starter as must Kevin Doyle leaving Robbie Keane, Shane Long and Simon Cox to battle it out for the final berth.

Long should claim this place instead of the Irish captain, Keane, as the West Brom man is both strong in the air, and more mobile, and has the potential to get onto through balls from as far out as the halfway line.

His pace would instantly force the Spanish backline to drop slightly deeper than they would like and with midfield spread further apart the ultra-fit Spanish will have to work that little bit harder while Ireland bypasses it completely.

With three mobile and physically strong strikers, Ireland will have the ability to close the Spanish defence down quickly as well as provide out-balls for their own defence.

When Spain do eventually get the ball into midfield, and they will, the forward three should condense in the centre of the Spanish defence, thus dragging their markers in with them so when clearances come the way of attack they must read the clearance be first to the ball so as to avoid instant counter attacks.

With a 4-3-3 formation, one central midfielder is always used defensively and his position is dictated by how the defence are set-up and play. His starting position will then dictate the positions of his two midfield compatriots.

The next phase of the 4-3-3 depends upon to whom the defenders pass the ball to. If they go to midfield the longest pass will be a 20-30 yard ball with each midfielder having to cover the same amount of ground between receiving and moving the ball on.

If the defender chooses to go long to the strikers then the two supporting central midfielders will have some 50-60 yards to make up as they support their team mates and by going too long too many times fatigue can set in very quickly.

However, to play Spain Ireland would be better set up for the three strikers to roam while only being supported by one midfielder who would rotate this job with his other team mates while basically leaving Ireland with six defensive players marshalling the back.

This, of course, if all very easy to say and it is entirely dependant on each and every Ireland player having the game of their lives.

Against Croatia they were disappointing to say the least and many senior players now feel they owe themselves and the many thousands of travelling fans a performance to remember.

It will take this and more to beat Spain and with Ireland as 12/1 rank outsiders for the match it will take the miracle of miracles for them to make the Quarter Finals.

But as a wise man once said – “football, it’s a funny old game.”