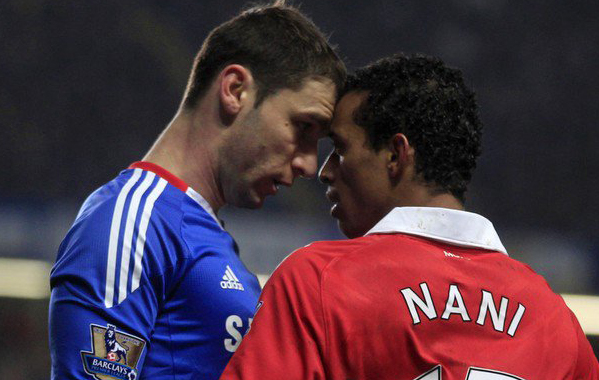 Manchester United takes on Chelsea at Old Trafford in a game that for many will decide the destination of the English Premier League title for this season.

With just three games to go, the two teams left standing after all the dust has settled are just separated by three points with an equal goal difference.

In other words, whoever wins this game should take the title and when all is said and done, this game for all intents and purposes is a final.

Alex Ferguson made wholesale changes to his team midweek when his second string XI took Schalke 04 apart in the Champions League. Now, each and every rested player should be restored to the starting line up, ready and raring to go at Carlo Ancelotti’s visiting Chelsea team.

Edwin van der Sar is a certain starter in goal for the record chasing Red Devils. Over the last few years he has established himself as one of the top ‘keepers in the world and Ferguson will have to trawl the world to find a suitable replacement for the consistent Dutchman.

The defence almost picks itself too. Nemanja Vidic and Patrice Evra should be joined by Rio Ferdinand, whose big game mentality insures that he should start against the Blues even though Chris Smalling is by far a more mobile player than the veteran.

That leaves Rafael and John O’Shea battling it out for the right full back berth. Ferguson will not go with the young Brazilian and Smalling in the same team in a game of such magnitude and with the centre forward threats that Chelsea possess so potent, it looks like Ferdinand would be the best option with Rafael just outside as an outball and attacking threat.

Ferguson can’t take any chances but even he wants an answer to the question that everyone wants to know; Who will Ancelotti pick? Didier Drogba or Fernando Torres or both?

It seems obvious that the two players have not had enough time to carve out a partnership, as they seem to run into the same areas of the pitch when Chelsea have the ball. Nor does either player seem comfortable playing as a wide foil for the other, so Ancelotti must choose who to go with as it will dictate the rest of his team.

For me, this game is too big for Ancelotti to choose Fernando Torres in his starting line up.

His presence hinders Didier Drogba’s contribution and leaves the team with two players who do not track back. Against an opponent as lethal as the Red Devils, there will be times when the Blues will want to leave one man up front by himself while they defend That man should be Drogba, but as the game gets stretched and the lack of pace in United’s defence gets closer to being exposed, expect Torres to be introduced.

With Torres out of the starting XI, Ancelotti’s mind is made up formation wise and he should go 4-3-3 with Florent Malouda supporting from the left with and either Saloman Kalou or Nicholas Anelka coming in from the right.

Drogba in the side should suit Ferdinand and Vidic, as he tends not to run the channels, although the recent form shown by the latter suggests that if the Ivorian can win the first few battles and bring his team into the game Chelsea could come out on top.

His presence offers a focal point that Torres does not and he is also better at linking with his midfielders than the Spaniard who prefers a counter attacking style of play.

Midfield is where this game will be won and lost and where the real questions lie in this United team.
Valencia and Nani are certain to start in the wide positions to curtail Chelsea’s wide options of Ashley Cole and Branislav Ivanovic.

Whatever formation Carlo Ancelotti chooses be it a 4-4-2 or a 4-3-3, there is a heavy onus on his wide defenders to support midfield and offer width to spread the play. Knowing that this is the case, Sir Alex Ferguson will most likely employ his two best wide players, Valencia and Luis Nani, to occupy and nullify the Blues full backs and to expose and gaps that may arise should their counterparts wander too far from defensive safety.

In this respect, expect Edwin van der Sar to hit the wide players early if they are in space.

Central midfield is a vital area to win in any match and this virtual title decider is no different.

Chelsea offers perhaps the strongest and most physical midfield in the game through the indomitable Frank Lampard, Michael Essien, and depending upon Ancelotti’s mood Jon Obi Mikel or Ramires.

Lampard and Essien are guaranteed to start and they dovetail each other beautifully. Both are extremely competitive and dominate their respective areas of the pitch allowing each other the freedom to express their game to the best of their abilities.

United will have to dictate the game in this area of the pitch and that is never an easy task against these two players. Lampard likes to bomb on and arrive late in the box, his goal scoring record is incredible, while Essien tends to cover every blade of grass on the pitch as he instigates almost every Chelsea move.

Michael Carrick will most likely be given the task of keeping Lampard quiet but his own lack of mobility could cause a problem if the Chelsea midfielder drifts as he is most likely to do.

That leaves Ferguson with the job of choosing one from Paul Scholes, Ryan Giggs, or Ji-Sung Park to partner Carrick in midfield. This game comes just too early for the returning Darren Fletcher to claim a berth in the starting line up, but he is sure to find a place on the bench.

Each of the named trio possesses skill sets that could be vital against the Blues. Scholes is tenacious and a superb midfield general, Giggs offers calmness and subtlety while Park offers energy and a fantastic attitude.
For this game, I can only really see Scholes in the middle despite his lack of stamina to last 90 minutes.

As it stands, there is no other English player who can compare to Scholes as a skilled midfield general. He dictates the game with an almost psychic positional sense and has a phenomenal range of passing so much so that around Carrington his nick name is Sat-Nav.

It makes sense to start with Scholes to lay an early foundation in central midfield, be able to match Chelsea in a physical battle if the need arises, and to offer a range of passing that will utilize the width given by Valencia and Nani.
Chelsea, for their part will try to shut the space down in central midfield as quickly as possible to inflict their own game upon the pretenders to their crown. To combat this, the experience of Scholes should be vital.
The hidden element in all of this is Chelsea’s other central midfielder be it Ramires or more likely Jon Obi Mikel.

Whichever player Ancelotti chooses to go with, he will be detailed with picking up the space that Wayne Rooney likes to operate it. The problem here is that the English international works so hard that he literally pops up everywhere and that he possesses a passing range that Bobby Charlton would have been proud of.

It will be tough to legislate against Rooney picking up scraps so Chelsea will have to shut his supply line down. And for that, they will need their wide forwards to clamp down on the United full backs while their central midfielders close off the space through the middle.

The first task for each United player is to find Rooney. He is the one that makes them tick, and denying him time and space is vital if Chelsea is to come out on top.

He will most likely be partnered by Javier Hernandez instead of Dimitar Berbatov.

While the Bulgarian may be United’s top scorer anyone who studied the contrasting Champions League semi finals against Schalke will have immediately seen that his lack of pace allows his opponents to push right up and congest midfield. Whereas Hernandez is so quick that defenders are afraid to push on in case he runs onto a through ball.

In this respect, Chicarito will be key for United as his presence alone will stop the middle of the pitch from becoming exactly what Chelsea want, a congested midfield battle zone.

Despite the different styles of play offered by United’s strikers, the Blues defence also picks itself.
John Terry will be partnered by David Luiz in the centre while Ivanovic and Cole will take up the full back slots as Cech comes in as goalkeeper.

Terry is not known for his pace and the slightly more mobile Luiz is the more likely to track the inevitable runs of Hernandez. However, they do seem to have struck up a quick partnership, unlike certain team mates and they are the foundation of this Chelsea side.

All in all this will be the most intriguing battle of the season.

Slowly but surely pressure has started to build on United. This was evident by their muted performance against Arsenal last week. The Gunners, by contrast, played for almost the first time since the start of the season without fear as their title challenge had dwindled away.

Now United find they are playing a team who have literally been playing without pressure for some 10 weeks and who now find that they have been given a most unlikely second bite at the cherry.

The Blues were many people’s favourites at the start of the season but injuries and sickness to key personnel saw their title challenge also fade away while Manchester United seemed to grind out result after result. And it is worth knowing that United always tend to win the EPL the year following the World Cup.

To win the title, Chelsea must take all three points from the fortress that is Old Trafford and become the first team this season to win there.

It won’t be an easy task.

United have taken 49 points from a possible 51 at Old Trafford this season and are unbeaten there since April 2010.

History will tell you though that the last team to win there were Chelsea, and that that was the result that won them the league in 2010.

And don’t be surprised if it does.

One thought on “EPL: Manchester United vs. Chelsea Tactical Preview”