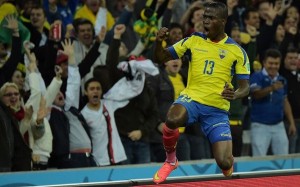 Today, in Estádio Maracanã, Ecuador play France in the final round of group E fixtures, a game perhaps of more significance to the former rather than the latter. France will obviously want to win – thus achieving a clean sweep of the group and guaranteeing probably one of either Nigeria or Iran in the first-round knock out stage – but in truth their +6 goal difference should ensure they win the group.

As such the game will hold slightly more weight for the Ecuadorians, and for one player in particular – 24-year-old Enner Valencia. The striker’s three goals, including his match winning double against Honduras, have piqued the interest of both the assembled audiences and also numerous scouts who feverishly mine the tournament for previously unknown talents.

Valencia certainly fits into that ‘previously unheard of’ category. Ecuador are the least fashionable of the South American contingent with their pragmatic playing style too ‘Pulis-esqe’ for even the most hip of football hipsters. Most non-Equadorians could be forgiven for not knowing there was another Valencia in La Tri alongside his Manchester-based namesake.

Enner Remberto Valencia Lastra was born in San Lorenzo a ‘canton’ in the north-western province of Esmeraldas. Like the story of so many South American footballer’s, the Equadorian’s childhood was one of relative poverty. The story goes that in order to buy a pair of football boots Enner would get up in the small hours to milk the cows on the farm where his father worked, and then bring the fruit of his labour to the local town to sell.

When, at 19 years old, Valencia signed professionally with Club Sport Emelec it seemed that the toil in the fields had bore dividends. Alas for two years Enner would have to make do with a place in the reserves, a situation that would have broken the will of many, but the son of a farmer knew that diligent work was nothing without patience.

The arrival of current Chile coach Jorge Sampaoli was the catalyst to move Enner’s career out of neutral. In the subsequent three seasons he was an integral part of an Emelec side that came second in the Equadorian Serie A, and then, in his final season in his homeland, Valencia won his first league medal – his club’s first championship since 2002. His club form was duly recognised by national team manager Reinaldo Rueda who called up the youngster who had been part of a disastrous Pan-American games in 2011.

Players who excel in leagues the size and reputation of Ecuador’s do not stay there for long. After months of speculation a fee was agreed that would see Enner leave Los Elétricos for the relative brighter lights of Liga MX. His debut season in Mexico was, for all intents and purposes, a verified success with the CF Pachuca’s fans eventually dubbing him ‘Superman’.

In the 2014 clausura championship Valencia’s 12 goals – the highest in the league – propelled Club de Fútbol Pachuca into the play-offs and all the way to the final – where, despite winning the away leg 3-1 – including a brace from the Ecuadorian – the Tuzos lost out on away goals to league heavyweights Club Léon.

Valencia’s increased goalscoring prolificacy can be somewhat attributed to the tragedy that beset Ecuadorian football nearly one year ago. Christian Benítez’s death forced the Ecuadorian coach to adapt Valencia from a winger to a striker to fill the void left by the 27-year-old.

In truth Ecuadorian football is still reeling from the events of the past 12 months – the nation’s FA wanted to retire the number once worn by Benítez for this World Cup only to be thwarted by FIFA’s cold rules and regulations – but at some point the grieving process must shift focus on the here and now, and Rueda knows this:

And so to this World Cup – after being sucker punched by Swiss, the Ecuadorians then went the full 12 rounds with Honduras. Their fans are living every duck, weave and punch with them – “Yes we can!” was their chant. The belief is there, waiting for the performance to meet it. Today in Rio all eyes will be on Enner Valencia – the boy from the fields of San Lonrenzo – the weight of a nations hopes, prayers and expectations weighing on his shoulders like the milk he used to transport to town.

He will know that right performance will not only bring their nation to a World Cup knockout stage for the second time but also provide some catharsis for the trauma Ecuadorian football has endured.