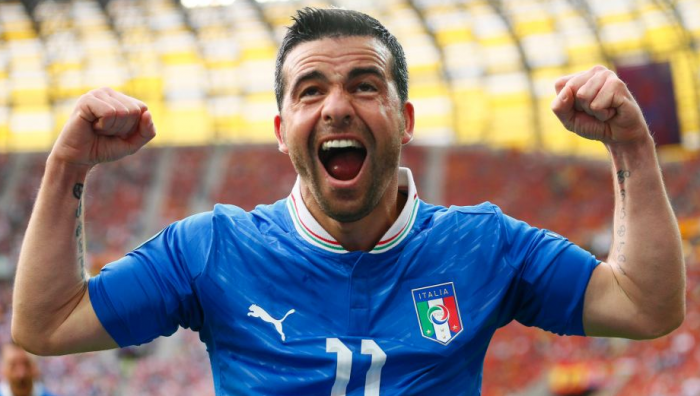 You could be forgiven for thinking England are going head-to-head with just one man in their European Championship semi-final on Sunday, rather than four-time world champions Italy. For whilst all the headlines, summaries and opening paragraphs have been seemingly based around one of world football’s most enigmatic, mercurial figures – Mario Balotelli for those of you who have been living in isolation, away from newspapers and the internet – his team-mates have been seemingly forgotten, or at most, an afterthought.

However, whilst reams of English written word are focused on the Manchester City striker’s potential impact, it could be a 16-year veteran, who has never played for one of Serie A’s big-five (Roma, Milan, Inter, Juventus, Lazio), but who has nevertheless won the Serie A ‘Capocannoniere‘ award (for being top-scorer in the Italian top-flight) twice in the last three seasons, who could keep Balotelli’s place in the Azzurri attack for the quarter-final in Kiev: Antonio Di Natale.

The 34-year-old Udinese captain, despite scoring in his countries opener against Spain and having been handed a starting role in the make-or-break match against Ireland – in place of Balotelli – has been somewhat overlooked in the build-up to Sunday’s match. You would think that a player who has scored over 180 goals for largely unfancied sides in Europe’s most notoriously defence-orientated league and who has been a crucial part in helping Udinese qualify for Europe in recent years would have been pinpointed as a potential match-winner. However, after two years of being ignored by his own national team manager, Di Natale certainly won’t mind if he isn’t flagged up by the opposition.

Two years ago, during Italy’s dismal World Cup campaign, Di Natale scored his 10th international goal, scoring against Slovakia at Ellis Park as Marcelo Lippi’s side crashed out of the competition at the first hurdle. He would have to wait 699 days to score his 11th.

When Cesare Prandelli ascended to the top job he took what he believed were steps towards a bright, attacking future. Antonio Cassano was Prandelli’s main-man, and Prandelli was rewarded with six goals in qualifying. However, the now-AC Milan striker was partnered by a rotating door supposed ‘form’ players, including Giuseppe Rossi, Mario Balotelli, Amauri, Alessandro Matri, Alberto Gilardino and Giampaolo Pazzini. Of all, it was Rossi, the Villarreal striker, who made the greatest impact, but a serious knee injury picked up at the beginning of the 2011/12 la Liga season with Villarreal ensured that he wouldn’t be fit to participate in Poland/Ukraine. Di Natale was very much out in the cold.

However, whilst each of Prandelli’s options saw their form disintegrate at one time or another, and whilst Cassano’s personal health became a major concern, Di Natale’s goals stayed constant, leading Udinese to 4th and 3rd place finishes in the last two seasons.

With Rossi’s injury, and no out-and-out goalscorer, no-one with similar predatory instincts, the clamour for Di Natale’s inclusion grew. Eventually, on the eve of the tournament, Prandelli relented, naming Di Natale as part of his 23-man squad, despite having never called upon the Zebrette forward before.

When Balotelli failed to impress in the opener against Spain, Di Natale stepped off the bench to coolly convert past Iker Casillas. When selected to start against Ireland he was a constant threat, almost scoring with an outrageous banana-shot from the byline (similar to Maicon against North Korea at the 2010 World Cup). The more conventional goal threat that he brings – well-timed runs, playing on the shoulder – should not be discounted. Should he take his place in the starting line-up on Sunday, England will have to be extremely vigilant. And they’ll need to be careful not to treat Antonio Di Natale with disregard.