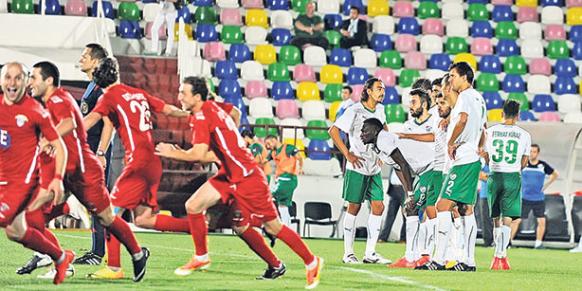 UEFA may not garner a great reputation as a governing body in modern football, but it’s hard to argue that the competitions it oversees present precious opportunities to the smallest clubs from the far-flung reaches of the continent. 2014 has been no different.

The Champions League, and even more so, the Europa League qualifying stages have once again thrown up a number of potential cinderella stories for the assortment of minnows all vying to have their moment in the sun.

One club who fits that category is Kazakhstan’s FC Aktobe, who face Romania’s Steaua Bucharest in the third qualifying round after they breezed past Georgia’s Dinamo Tbilisi 4-0 on aggregate in the second round. The Kazakh champions have reached this stage once before; in 2010 when they were bettered by Maccabi Haifa 4-3 in Israel. Ever since Kazakhstan became the 52nd official member of UEFA in 2002, only Shakhter Karagandy have managed to successfully negotiate the entire qualifying process and represent the country at the group stage of either the Champions League or Europa League.

Their adventure in the latter was short-lived-they failed to win a match and went home bottom of a group containing AZ Alkmaar, PAOK of Greece and Maccabi Haifa – but it was nevertheless a breakthrough moment in Kazakhstan football. Now, FC Aktobe look to go one better by reaching the play-off stages of the Champions League where they would rub shoulders with the likes of Arsenal, Porto and Napoli.

A triumph over Steaua Bucharest may seem unlikely for FC Aktobe, but a real giant-killing tale is more likely to come from SKN St. Polten, who won their first ever match in a European club competition by overcoming the Bulgarian outfit Botev Plovdiv 2-0 at the NV arena. They are one club who are familiar enough with defying the odds. Occupying a place in the second tier of the Austrian football league system, they managed to reach the final of the Austrian cup, only to be defeated 4-2 by Red Bull Salzburg, who are to Austrian football what Bayern Munich are to German.

Finishing runners-up in their domestic cup made them eligible for participation in the Europa League from the second qualifying round and they are determined to do more than make up the numbers- which are vast in the Europa League set-up. For a team that plays in front of 8,000 fans most weeks, the opportunity to walk into the significantly superior Philips Stadion and go toe-to-toe with the European Cup winners from 1988 is something of a dream come true. Moving away from idyllist fodder, they will most likely lose, perhaps heavily, but the enduring legacy of European competitions providing a platform for the smallest clubs in Europe who are not televised, barely hold sponsors and fit semi-professional football around their weekly routine of work and family matters is endearing. The story of the underdog is always one to watch with intrigue.

The same can be said for FC Chikhura Sachkhere and Neftchi Baku PFK, who play each other in the third round of the Europa League’s qualifying process. Chikhura, from Georgia, don’t need to be told about small. Georgia has a population less than half of Georgia, the state in the United States. Despite that, Chikhura got the better of Bursaspor on penalties on Thursday night after successive goalless draws. In the UEFA rankings, Chikura are 361st, which places them among the lowest in the entire Europa League set-up. But that hasn’t stopped them doing a personal best in reaching the third stage.

Awaiting them are the Azerbaijan club Neftchi Baku PFK, who sent shock-waves throughout Europe when they held Inter Milan to a scoreless draw at the San Siro in 2012. It was an inconceivably momentous occasion and result for a club who where the first to advance to the group stage of a European competition. That match is the crystallising moment for all aspiring minnows. For an unknown club to walk off as equals on the stage of Italian giants, with a glittering European record, was the apogee of their careers. A truly unforgettable moment.

That is what the Champions League and Europa League can provide. At one end, there is the grotesque battle for supremacy driven by money and power – look at the four semi-finalists in last season’s Champions League – and at the other end, a swarm of footballers microscopic in comparison to Ronaldo, Messi and Ibrahimovic all aspiring for that one great moment. For Neftchi Baku, they may never hear the referee’s final whistle at the San Siro again, but they will certainly go down fighting.

Following the trials and tribulations of an Atletico Madrid or a Borussia Dortmund reaching the Champions League final is exciting and almost guarantees one’s allegiance to them when they are facing the Goliath task of dethroning Barcelona, Reak Madrid or Bayern Munich. However, casting an eye into the lowest echelons of European football is where the real stories can be found. Stories of clubs still in their infancy, clubs with zero European pedigree, clubs that look like Joe’s burger van when compared to Real Madrid’s McDonald’s-esque global influence and supremacy. These clubs dare to dream of a bigger stage to play football and sometimes that dream is realised.