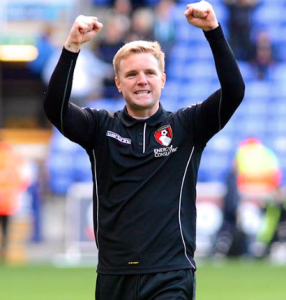 Last season in their first back in the second tier of English football for over 20 years, Bournemouth finished in a very respectable tenth position. They were in the play-off picture for a considerable portion of the second half of the season but missed out by just six points.

This season has been good so far, but they know they can improve. The ‘Cherries’ currently sit in 11th with four wins and four defeats. It is certainly a base in which to work with and climb up ultimately to those play-off positions. With a 2-1 away victory at Bolton this weekend, Bournemouth can use this result to push on and prove they can be worthy contenders.

The squad is in place to do so. Manager Eddie Howe has developed and added to an extremely talented bunch of players at this level.

Starting from the back, they have two very competent goalkeepers for the Championship. Lee Camp was signed in the middle of last season and instantly became number one keeper. He has been a top keeper in the Championship for a number of years now, making over 300 appearances for Derby, QPR and Nottingham Forest respectively.

The other goalkeeper is on-loan Southampton player Artur Boruc. The Polish international is on loan until January and has plenty of experience playing at a high level; with Celtic, Fiorentina and Southampton.

The defence is looking pretty solid as well although, there is always room for improvement. They have plenty of experience with Tommy Elphick who has been a key defender for over two years. Then there is the Irish veteran Ian Harte who – although might not start every game – can do a reliable job and is always a threat with his set-plays. Steve Cook is a young centre back with potential to give the defence a mixture of both youth and experience.

Players such as Harry Arter and Marc Pugh have made well over 100 appearances each for the club and continue to improve the team. But where the club can really build on from last season, is through the quality in the signings that were brought in over the summer.

Andrew Surman was picked up in the summer after a successful loan spell last term. He is a player who brings Premier League experience and can be a midfield general in the middle of the park, especially with his passing skills and his ability to break the game up.

Junior Sanislas is another summer signing with the potential to impress. He was tipped for big things whilst at West Ham and although he has not come on as expected, he did a good job at Burnley. He is a player that can grow into a major asset for the club.

The most impressive and crucial summer signing is Callum Wilson. He was signed from Coventry City in the region of £3 million and so far has proven to be a key man for the club. The striker scored 21 League One goals for the Sky Blues last year and won a place in the end of season team of the year.

Wilson has managed six goals in eleven Championship matches this season and is the man to watch this season. He has bundles of pace that allows him to beat defenders with ease and a tremendous finishing ability. He also an excellent dribbler of the ball and is someone that can manage 20 plus goals at this level.

So with a talented squad, a young, well-respected manager and some results from which they can build from, Bournemouth are certainly capable of putting together a run to get into the play-offs come May.