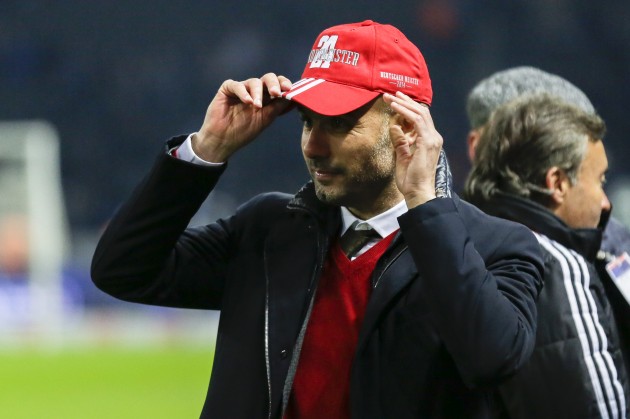 Was it the easiest mandate in world football?

In June 2013, Pep Guardiola took charge of the Champions League winners – whose first XI had an average age of just 26 – and one of the world’s most profitable clubs.

His biggest threat, Borussia Dortmund under the majestic Jürgen Klopp, were already weakened before the Catalan’s arrival by the sale of Mario Götze.

Guardiola, in short, had been left incredible foundations by his wily predecessor, Jupp Heynckes: a team who had reached three Champions League finals in just four seasons under Louis van Gaal and the German.

Equally, the chaos, scrutiny and suspicion that the rookie Guardiola had to deal with in taking over his beloved Barcelona in 2008 seemed like it would not be present.

Well, that’s how it appeared; in actual fact, Guardiola had a more difficult job than most people gave him credit for.

Yes, little personnel changes were required – with only Götze and Thiago Alcantra notably arriving and just four first-team players departing – but Guardiola had something more daunting to deal with: Bayern’s hierarchy.

Whatever about the self-inflicted pressure that saw Guardiola lose his hair and suffer a spinal disc hernia in being a coach, friend, politician and peacemaker at Barcelona, he had a loyal ally in Joan Laporta between 2008 and 2011.

At Bayern, dealing with the legion of die Dinosaurier – Franz Beckenbauer, Uli Hoeneß,  Karl-Heinz Rummenigge and, to a lesser extent, Mattias Sammer – Guardiola had an unenviable task.

Beckenbauer, the captain of Bayern’s ruthless golden age in the mid-70’s, would even refer to this record-breaking Bayern team as being boring.

Yet – in taking up German while on sabbatical in New York and refusing to do personal interviews – Guardiola has merely let results do the talking: an astonishing 53 games unbeaten.

Tellingly, under Guardiola, Beckenbauer’s comments, or Hoeneß’ off the field travails, have done little to stabilise a club once known as FC Hollywood.

While it has led to accusations that the Bundesliga product has been damaged as a result – with Borussia flagging and about to lose Robert Lewandowski to their bitter rivals – that is as much a tribute to an unprecedented achievement.

Of course, that achievement will mainly be measured in the inevitable haul of trophies Guardiola leads Bayern to, but there looks to be a pertinent legacy too.

The status quo has been unimaginably flipped, symbolised in captain Philipp Lahm’s re-deployment at defensive midfield and Guardiola’s effortless shift in tactical formations.

Equally, seemingly limited technical footballers like Dante and Mario Mandžukić have proven themselves as key components of Guardiola’s project.

Sure, any team of Bayern’s quality should be able to do adapt and redeploy, but many complained of Heynckes’ occasional shackles and predictable selections during his three-year reign.

It was an ironic turn of events for an attractive side in their own right and it must be stressed that German football was suffering a crisis of identity in the decade previously – culminating in a disastrous group stage exit for the national team at Euro 2004.

This was reflected continentally, too, with no German side reaching the final of the Champions League between 2003 and 2009; it was four times between 1997 and 2002.

Something changed with the re-emergence of Borussia Dortmund and the German national team, and the shrewd marketing of the Bundesliga – amid cheap season tickets.

Given how Dortmund and Die Mannschaft had captured the world’s imagination, with a breathtaking combination of technique and pressing, Guardiola has taken that one step forward with Bayern.

Already, it could be a tangible legacy for the club and nation – particularly if Bayern become the first side to ever retain the Champions League come May.