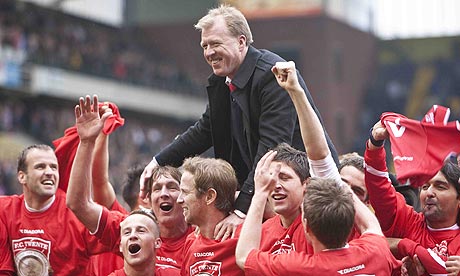 Ajax fans should have real grounds for optimism ahead of the new Eredivisie season which starts this Friday, August 6th.  Re-securing the services of Martin Jol for the next couple of seasons and the return of some outstanding performers from the World Cup mean the Amsterdam club are a realistic pick as favourites for the title this time around.

Although pre-season time for Jol with his full squad has been limited, anybody watching the first half of their Champions League qualifier against PAOK last week must have been tempted to log on to an online betting site and put a hefty sum of money on Ajax winning their first Eredivisie title since 2004.

Ajax were almost irresistible in that first half, and although some of the finishing could have been better, the whole team looked to be carrying on from where they left off last season where 14 straight wins, 50 goals scored and only 3 conceded left them just 1 point shy of FC Twente in the race for the title.  Luis Suarez and Gregory van der Wiel looked to have lost nothing of the superb form they showed in South Africa, Maarten Stekelenburg is now a reassuring presence in goal, the young players Emanuelson, Eyong Enoh and Vurnon Anita looked very sharp and Siem de Jong in the midfield seems to improve every week.

The only thing missing from the Ajax squad looked to be a true goal-scorer, with Marco Pantelic having been released at the end of last season due to no agreement being met with the club over the duration of his new contract.  2 days after the PAOK match, Ajax confirmed the signing of Mounir El Hamdaoui from AZ Alkmaar.  Pantelic had a steady season last time around, but the fans may be more optimistic following the signing of El Hamdaoui.  Having scored 48 goals in 3 seasons at AZ, he is a proven goal-scorer in the Eredivisie and could provide the missing ingredient for a serious assault on the title this season.

However, some of the gloss does seem to have come off this optimistic pre-season outlook for Ajax.  The 2nd half of the PAOK game raised real questions over the tactics being employed by Martin Jol, with his team sitting back and allowing PAOK the one shot on goal they needed to equalise.  This vital away goal leaves Ajax with an extremely tough task away in Saloniki this week to gain the result needed to progress towards the Champions League qualification the fans crave just as much as the Eredivisie title.  Furthermore, Ajax must play their first 2 league games against Groningen and Vitesse without Luis Suarez, the now world famous Uruguayan striker being sent off in the Dutch Super Cup defeat against FC Twente.

Last season was an exceptional one for FC Twente Enschede, and there have been no shortage of plaudits for Steve McClaren, bringing the club their first ever Eredivisie title.  Even though McClaren has left to try his hand in the Bundesliga with Wolfsburg, Twente were quick to appoint their new coach Michel Preud’homme, brought in from FC Gent in his native Belgium.  Preud’homme led Gent to the Champions League qualifiers for the first time in their history last season.

The signs are slightly worrying for Twente on the playing front, with some of the star players from last season, Blaise N’Kufo, Ronnie Stam, Kenneth Perez and Miroslav Stoch all having left over the summer.  Replacements have been recruited and although relatively unknown names, the Venezuelan Roberto Rosales, the two Swedes Rasmus Bengtsson and Emir Bajrami and striker Marc Janko signed from Salzburg, are tipped to be some of the exciting new players in the Eredivisie this season.  Twente will be there or thereabouts come the end of the season, however with the extra demands of the Champions League I don’t expect them to have quite enough to match Ajax this time around. 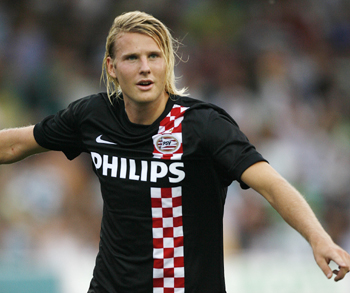 PSV Eindhoven have quietly had a very productive summer in the transfer market while also managing to keep last season’s squad largely in tact.  The addition of the Brazilian Marcelo signed from Wisla Krakow will compliment the Mexican duo Calcido and Rodruiguez in a strong defence.  With Isaksson in goal, Orlando Engelaar, Ibrahim Affelay and Danny Koevermans all solid Eredivisie players, and the addition of striker Marcus Berg from HSV, the PSV squad looks to me the most likely to push Ajax at the top.  One player to watch out for is Balazs Dzsudzsak, an incredibly talented young Hungarian winger.

The departures list at Feyenoord is a long one, veterans Giovanni van Bronkhorst and Roy Makaay two of the more prominent players not reporting back for pre-season at De Kuip, both players announcing their retirement.  It is unfortunate that the Rotterdam club have not managed to keep hold of Jonathan de Guzman, the player who had some superb moments last season has chosen Real Mallorca as his new employer, leaving as a free agent over the summer. Feyenoord have had their interest in PSV’s Danny Koevermans rejected and it looks like this season will be another transition one for a club currently very focussed on youth development.

Lots of clubs in the Eredivisie appear to be trimming down their squads this season, presumably in an attempt to reduce wage-bills.  There are a host of teams just outside the new top three, as I call it (Ajax, PSV & Twente) who will be hoping to consolidate their current positions and push for European qualification and the extra financial benefits it brings. This season AZ Alkmaar and FC Utrecht have started their Europa League campaigns well and will be hoping to push for the top end of the league. Heracles Almelo impressed last season, and will be intent on going one step further and gaining their first ever European qualification.  After an impressive pre-season they will be a team to watch out for in this time around, and while their main competitors have European matches to negotiate, this may give the team from the East of Holland  an opportunity to gain a head-start in domestic affairs.  NAC Breda are another club to whom the above may apply.

The two Friesian teams, FC Groningen and SC Heerenveen will presumably make up the numbers in mid-table together with NEC Nimegen, however as they experienced last season, it won’t be long before these clubs are looking over their shoulder towards the bottom of the table.  Roda SC showed signs of improvement at the end of last season, and while Vitesse Arnhem are a very inconsistent side, they do have their moments.  VVV Venlo have struggled since they lost Keisuke Honda, a player now destined for even bigger things, however it may be interesting to look out for 3 Portuguese players the Limburg club have bought in on loan from Porto.

The newly promoted De Graafschap will presumably be one of the favourites for relegation and Excelsior may be something of an unknown entity, the club traditionally used as a feeder club for Feyenoord have replaced Rotterdam neighbours Sparta in the top flight.  Excelsior have bought in several players on loan from ‘Young Feyenoord’ and may provide something of a shop-window for scouts interested in the best young players Rotterdam has to offer.  How Willem II stayed in the top flight this time around I have no idea, the quality of their football last season really was dire, and it is when watching teams like this that you realise that the standard at the bottom of the Eredivisie is equivalent to that found several steps down the English football pyramid.

I’m saving the final paragraph for ADO Den Haag, my local team, for whom I am a club card holder.  The club card system in Holland means that supporters can only really attend home games of the club they are registered for, and away travel is also heavily regulated.  This not only makes ground-hopping a challenge, but also means someone like me watches most of their football at the same stadium.  ADO are another frustratingly inconsistent team, and are always in the relegation mix.  Anything different this time around would be a real surprise, as several of the better players from last season have left.  New recruits are few and far between, but one player I’ll be following with interest is a young Slovak striker called Frantisek Kubik who has been signed from AS Trenchin.

The first round of games sees Twente travel to Roda, PSV to Heerenveen and Ajax away in Groningen.  None of the big teams will want to drop points early in the season, with psychological advantage counting for a lot in this division.  The big three all have relatively easy starts to the season, and the first really big match in terms of league position is at the end of September when Twente host Ajax.

An eye on the lesser known regions of European Football.