The much-anticipated clash between the top two sides in the Premier Division ended in a 1-1 draw at Oriel Park as both sides finished the game with ten men.

Yellow cards were the order of the day as whistle-happy referee Padraig Sutton dished out three to the home side, and an incredible eight to the away side.

Dundalk’s Chris Shields received his marching orders in the 55th minute, followed by Derry’s Conor McCormack twenty minutes later. McCormack has now been sent off in his last three appearances against Dundalk. 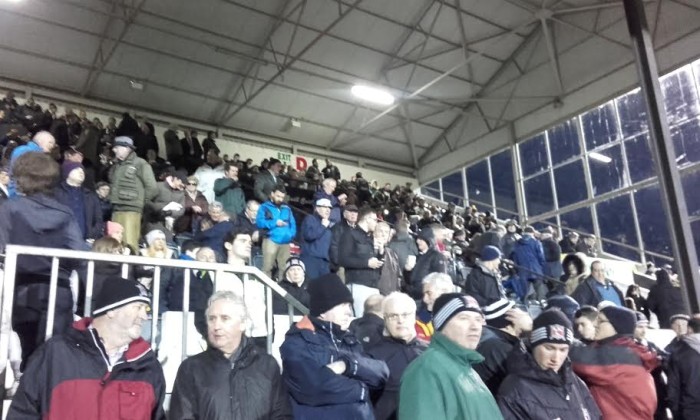 It was a frustrating game for the home supporters while fans of Kenny Shiels’ Derry side will have traveled home satisfied with a point as they failed to threaten Dundalk significantly.

Back Page Football spoke with Derry supporter Bernie Kealey after the game. She was positive about her team’s display as she told us:

I think we deserved that point. We played very well against a much more fancied side. I thought Daryl Horgan did very well for Dundalk in the first half but was snuffed out by Barry McNamee in the second half.

I thought McNamee had a great game and, like in Wexford, great saves from Ger Doherty. It was worth the drive.

Indeed, Horgan appeared omnipresent in the first half causing trouble down both flanks. The Galway native was very much at the heart of an impressive early showing from Dundalk which saw man of the match Ronan Finn set up David McMillan for the opening goal as early as the fourth minute.

The champions’ defence proved a tough nut to crack for the visitors. Their first chance came through Gareth McGlynn who shot over from outside the box in the 11th minute before being forced off through injury moments later.

Poor finishing was letting Dundalk down as Finn went close late in the first half. An evident bluntness in front of goal was uncharacteristic of the Lilywhites who had notched up 12 goals in their opening five league games before this match.

Home supporter Brendan Halpenny was disappointed with the lack of chances created and alluded to last season’s star performer Richie Towell who has since moved across the Irish Sea to Brighton & Hove Albion.

We didn’t create enough. Richie would have got you a goal in the likes of those games. If it was last year we would have won it but Horgan’s the only one who’s creating for us.

That’s two bad home games we’ve had where we didn’t create enough. We’ve been playing very well away from home. I was at the game where we won 4-0 against Pat’s. We played well but we’re not playing well at home, unfortunately.

The second half began amidst a plethora of fouls awarded by referee Sutton, some warranted and some not so warranted.

Shields and McCormack’s red cards were the first of the season for either club and the County Clare whistler is not too popular among the Dundalk supporters we spoke to after the game, including Brendan Tinnelly who said:

The referee was poor. It’s not the first time he’s been poor. In general, he’s not the most consistent but that’s life.

That’s life indeed and life got worse for Dundalk as Derry carved out an equaliser in the 67th minute when Harry Monaghan’s through ball was received by striker Rory Patterson.

Patterson’s effort bounced off the post before the ball was slotted home by McNamee who notched his first goal of the season.

After McCormack’s sending-off, Shiels and his Dundalk counterpart Stephen Kenny both had to adjust things tactically in a bid to win the game with ten men.

Dundalk substitute Patrick McEleney went close in the 82nd minute with a bending effort which was caught by Candystripes goalkeeper Doherty.

The home support became more and more vociferous as the minutes ticked away. To add to the suspense, the Oriel Park scoreboard had given way leaving much guesswork as to how much time was actually left.

That was until fourth official Dave McKeon raised his board to indicate four minutes of added time and the crowd knew exactly how close their side were to going two home league games without a win for the first time since August of last year.

Horgan went close again but that was to be it as Sutton blew the final whistle on a game which will be remembered more for ill-timed tackles and than anything else.

The sides remain locked together on 13 points at the top of the table with Dundalk edging things over Derry as a result of a superior goal difference.

Home supporter Jim Shevlin summed up how many of his fellow fans were feeling afterwards. Pragmatic about the draw, he still saw enough to suggest that his team can go on and win a third successive Premier Division title.

We should have won the game. We didn’t press on after the first goal and I felt we overplayed the ball. Derry played very well. They closed the game down and tackled hard.

Hopefully we’ll win the league but I think it will be tight. Cork City and Shamrock Rovers will be our main competitors.

So that’s one man unconvinced of Derry’s title aspirations, but for now they are very much breathing down the necks of the defending champions.

Next up in the league for Derry is a home game against third-placed side Shamrock Rovers while Dundalk face a trip to Longford Town.