With attentions soon turning back to the Ireland team after the much-needed winter break gave Stephen Kenny a chance to step back and analyse an unprecedented and, ultimately, rather disappointing start to his career in charge, it’s amazing to think that we go into the March internationals with more questions to ask in both the squad selection and staffing departments than when we signed off on the nil-all draw with Bulgaria back in November, as Irish football continues to shoot itself in the foot – even as there’s no football being played. 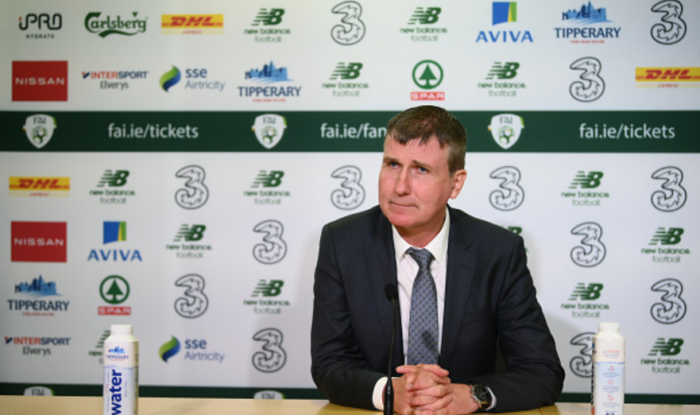 Kenny had a far from ideal start to his time as manager. Although sceptics were already on alert given his limited experience at this level, it wouldn’t have taken much for the former Dundalk boss to gain some credit in his first months, having to navigate a difficult eight-game stretch where time on the training field was extremely limited. However, add that busy schedule to the volume of COVID dropouts, the Slovakian incident with Aaron Connolly and a simply disastrous run of luck with injuries, knocks and positive cases, it really couldn’t have gone any worse for a newly appointed manager attempting to unwind decades of the Irish style of football that we had become to know and loathe.

And, unfortunately, that rotten form transferred over to the football field where, without a single win and just one, lonely goal, the sceptics are ready to pounce should the tide not be turned next month.

So where are we, three months later looking towards the qualifying campaign for the 2022 World Cup? Well, if you had taken a sigh of relief back in November that that era of McCarthy cobwebs and pandemic-stricken squads was behind us and that things could only get better, this is Irish football we’re talking about.

On the playing field, in-form Irish footballers have been few and far between. Let’s start with badly needed goals. Aaron Connolly has two in the Premier League for Brighton, but hasn’t been hugely involved – playing just 14 games and being a substitute in most of them. Adam Idah hasn’t had the impact we were hoping for in the Championship with Norwich, scoring a single goal in an injury-hit campaign. Troy Parrott’s loan spell at Milwall was a complete bust and he’s now taken a further step down to League 1’s Ipswich Town. Callum Robinson has had some bright moments for West Brom in the Premier League, scoring two goals, enough to likely warrant a start next month.

Indeed, our one ray of light – five-goal David McGoldrick, who has been genuinely impressive in a struggling Sheffield United side – has retired. Yes, there’s that rotten luck again.

With murmurs that that decision from the 33-year-old could be reversed in time for the opening qualifier against Serbia, it’s stark that we may be hinging our goalscoring hopes on a previously retired player who, although has impressed regularly for Ireland and has been excellent in his role at Bramall Lane, is far from a prolific goalscorer.

And then there’s the defence. Shane Duffy had a hard time of it early on in Kenny’s campaign, struggling to adapt to the increase in ball retention and requirement to be more involved in the ball playing. Since then, he’s left for Celtic and it has been an unmitigated disaster – to the point that it would have been very unlikely and downright dangerous to start him against the Serbs. That was until John Egan went down for Sheffield United clutching his knee and was almost instantly ruled out for the rest of the season.

We could conceivably see a new-look starting partnership against Serbia with a pairing like Dara O’Shea, who is still adapting to an elite level, and Ciaran Clark who has had a semi-renaissance to his career at Newcastle.

Matt Doherty has struggled at Spurs, but perhaps not enough to be dropped from the position he has claimed as Ireland’s starting right back ahead of Seamus Coleman. On the left, Enda Stevens has regressed from his 2019/20 form – but so has his entire team and he will absolutely start once available.

In goals, Darren Randolph suddenly has some genuine competition for his #1 jersey in Caoimhin Kelleher, who was impressive in some of his cameos for Liverpool in the absence of Alisson.

To acknowledge the midfield – stalwarts like Jeff Hendrick and James McCarthy have struggled at their respective Premier League clubs, while Robbie Brady is in desperate form for Burnley and dealing with persistent niggling injuries. Although he took another Championship loan spell, it’s likely Jayson Molumby will be thereabouts in Kenny’s plans along with Jason Knight who has found himself as captain under Wayne Rooney at Derby. Another Championship loanee, Conor Hourihane, has been superb since moving in January – enough to warrant a start for Ireland and arguably be considered our most in-form player at the moment, although the bar is quite low.

Another odd development saw Jack Byrne follow Mick McCarthy to APOEL in Cyprus. McCarthy has already been sacked and Byrne is only just breaking into the side and it wouldn’t be a surprise if he was omitted from the upcoming squad.

Kenny has already seen a huge pool of players come through his international camps, most of which forced due to COVID omissions and injuries, so he may have a strong idea of who he likes and who might best suit the system despite the apparent lack of club form throughout the English leagues and beyond, but it’s far from an ideal scenario to face into given his desperate need for a win and some goals.

In trying to turn around a group of players with middling form, find goals from somewhere, patch up areas that have struggled, try to replace the void left by John Egan and potentially McGoldrick too, Kenny will be down two coaches he had last year in a turn of events that left everyone a little bit gobsmacked.

Firstly, Damien Duff left his role as coach back in January. It was a huge surprise and to this day we are none the wiser, even after his brief grilling from Darragh Maloney ahead of the Champions League game between Liverpool and RB Leipzig this week. It’s clear there were disagreements between Duff and the FAI, possibly down to the handling of the video that caught Kenny in a brief whirlwind after the England friendly last November which purported to show anti-English sentiment, but was quickly squashed as a nothing story. That this was enough for Duff to leave his role and Kenny down his most high profile backroom staff member was a huge shock, but it’s likely to be some time and possibly a Champagne Football reboot for the full story to come out.

That was followed up days later by Alan Kelly who left his role as goalkeeper coach, citing concerns over the COVID pandemic. A very fair reason for anyone given the times we are living in, but to throw on the tinfoil hat for a moment – it’s not quite a mad conspiracy to link the departure of Kelly and Duff days apart as being connected in some way, especially if you trace the steps back to video-gate. Kenny quickly replaced him with Dean Kiely who is also coaching for West Brom in the Premier League and their goalkeeper Sam Johnstone has been tremendous at times this season.

So, it’s fair to say the last few months have been tumultuous by Irish football standards, even in the absence of any national games. I don’t think anyone envies Kenny’s position right now, facing into a World Cup qualifying campaign down key players, senior coaching staff, all the while trying to find a goal or two and a much-needed win – and not to mention trying to completely change the style of Irish football that we had become so accustomed to. It’s all going to need time – time he may not be afforded.