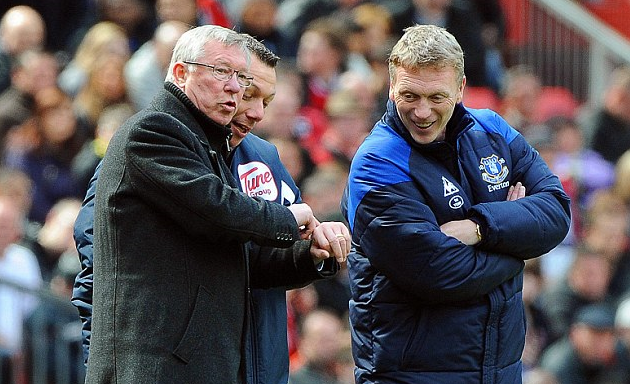 Two former graduates of Drumchapel Amateurs have been hitting the headlines in a big way recently. Plenty of famous names have passed through their ramshackle home at Glenhead Park in the village of Duntocher , near Clydebank on the outskirts of Glasgow. Scotland internationals such as John Wark, Asa Hartford, John Robertson, Andy Gray and Archie Gemmill all spent time playing for ‘The Drum’  in their formative years before going on to represent some of Scottish and English football’s leading clubs, as well as pulling on the national jersey during a time when the Scotland team had possibly it’s finest group of players. But probably the two most heralded of Drumchapel’s alumni are new Manchester United manager, David Moyes, and his retiring predecessor, Sir Alex Ferguson.

The respective eras of the two Glaswegians are separated by over 20 years, but the ethos and virtues which have been at the core of the amateur club since its inception in 1950 left an indelible mark on those teenage footballing hopefuls. Moyes in particular can attribute his early education in the game to his close links to the club. Having been a promising centre-half before earning his move to Celtic, his parents have been heavily involved in the running of Drumchapel Amateurs for many years. Moyes’ father, David Sr. is a club director having also been a coach, while his mother Joan spent her fair of time washing strips. David Jr. trusted his old man’s judgement on players enough to have appointed to him as a scout for Everton during his 11 year reign at Goodison Park. Moyes himself often returned to Drumchapel during his Celtic days to coach their next generation of youth team players, displaying his early interest in the managerial side of the game.

Ferguson first turned out for Drumchapel in the mid 1950’s at 14-years-old, when a man pivotal to the teenage years of both himself and Moyes called Douglas Smith persuaded him leave his former team Harmony Row. He then went on to have a decent senior football career in Scotland which began with another amateur club, Queen’s Park, before spells with St.Johnstone, Dunfermline, Rangers, Falkirk and Ayr saw him bag a respectable 170 career goals. To this day, he retains a relationship with ‘The Drum’ as a director and by often supplying free pieces of Manchester United kit for their teams to turn out in. Both men have their names etched on the various plaques placed adjacent to the pegs in the dressing room. These have served as inspiration for those who use the facilities to this day and they carry the names of the many former players to have graduated the amateur club and gone on to have significant football careers. Moyes can be found at peg No. 5, Ferguson at No. 10. to denote which shirt they wore during their Drumchapel days.

Ferguson and Moyes are connected through the working class beliefs of self-discipline and hard work instilled into various generations associated with the club. Players were encouraged to present themselves smartly, wearing jackets and ties to games, zero tolerance on swearing and bad behaviour and standards had to be high both on and off the field. However, the two men do come from relatively different socio-economic backgrounds. Govan-born Ferguson, brought up in and around the tough, uncompromising Clyde shipyards with a family steeped in Trade Unionism, is the archetypal gritty Glaswegian docker, while Moyes was raised in the much more affluent area of Bearsden in the north east of the city, a suburb ranked as one of the ten wealthiest areas in Britain as recently as 2005 with over 150 millionaires reportedly resident there. The club’s original home in the Drumchapel area, renowned locally for its large 1950’s housing estate and subsequent social problems, represents an area closer to Ferguson’s social origins, while Moyes’ home town of Bearsden borders Drumchapel to the north east.

Drumchapel Amateurs have long been a highly respected member of the amateur football scene in Scotland. They won the Scottish Amateur F.A. Cup at Hampden Park back in 2005 and top this season’s standings in the Central Scotland Amateur League Division 1B . After the demise of another local club, Duntocher Hibernian, in 1980, Drumchapel Amateur FC moved from the area which gave them their name and into Duntocher’s Glenhead Park, which is locally known as ’The Hibby’ in reference to the ground’s former occupants. With its crumbling terrace covered by a rickety old roof on one side of the pitch and a steep grass-banked area opposite, these rustic surroundings are a million miles from where these two giants of the British game find themselves today. The out-going Everton manager will hope to continue the success of Sir Alex at Old Trafford hopeful he can tread a similar path to glory as his Drumchapel mentor.