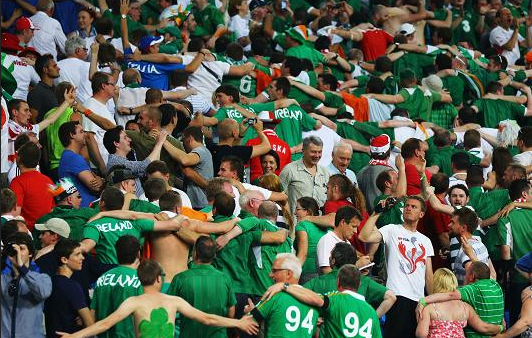 Don’t be a fool or a hypocrite this summer. Wear sun cream when it’s hot, particularly if you have pale Irish skin, and especially when you’re cycling; no matter what the velominati might suggest, if you are only doing one charity cycle this summer then that lycra tan line is one thing but the burn line is defiantly not cool. And avoid being a hypocrite: don’t walk into your local pub during the World Cup and announce that you are supporting the team that is playing England that evening.

If you have already been out and bought a Uruguay and a Costa Rica jersey (everyone who does this already owns an Italian jersey, and probably wears it too often) then you need to seriously take a look at where you are at in life.

Anyone who does this and follows a Premier League team week-in-week-out is a hypocrite and should be reminded of it daily. Anyone who does this and does not has no right to be openly voicing an opinion on the World Cup in the first place and should stick to having a clichéd opinion on a sport that they never played but that became a badge of the overtly middle class identity they developed during the Celtic Tiger; Rugby.*

We all know how ridicules and ignorant England fans have been over the previous decades. But remove the fascist element and I’d rather have a beer and discuss football with some muppet who gets excited at the sound of the worst national anthem in the world than someone who never goes to Ireland matches at Lansdowne Road, or seen a League of Ireland match in their life, yet goes to Poland for the piss up and sings Fields of Athenry and goes on about Joxer going to Stuttgart because they once heard it on the end of a Christy Moore greatest hits CD.

No one is forgetting the centuries of oppression, the famine, the Black and Tans or the occupied counties. But the English didn’t hand a blank cheque to failing banks, consign another generation to forced economic emigration and sign us up for years of crippling austerity.

Historical grievances are all part and parcel with national identity, and Ireland has a right to feel these grievances as much or even more than other nations. But if you must express them through sport do it through a sport that has a history rooted in imperialism, societal injustices and inequality; like rugby, golf or cricket. Don’t take it out on the England football team when you would rather travel to London, Liverpool and Manchester for a match than Dublin, Sligo or Cork.

James Connolly once said that if the British Empire is our biggest enemy, then the British working-class are our closest allies. How many players have been born to Irish emigrants and played for the Republic of Ireland? How many more have gone on to play for England?

At the end of the day the greatest game in the world, one played by more people than any other sport, should be an inspiration to us all. If you support a Premier League team then don’t be a hypocrite or a fool this summer. I’m not saying support them, I’m just saying don’t embarrass yourself and shout for the other team as a knee-jerk reaction to England.

*League of Ireland fans who regularly attend matches and don’t follow an English Premier League team are the exception.

10 thoughts on “Irish fans – don’t be hypocrites this summer”