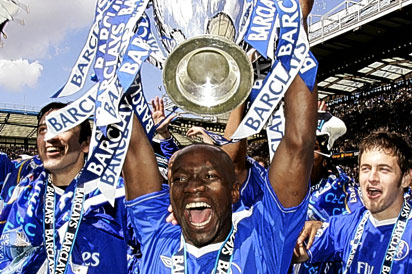 Raw excitement, plenty of goals and end to end football; many observers believe this to be the appeal of the Premier League. The 2011/12 season has provided, especially between teams at the top of the table, a heady mix of all three. Just think of the 8-2 at Old Trafford, or Spurs twice conceding five, Arsenal going to Stamford Bridge and scoring the same amount or City doing the unthinkable, and putting six past Manchester United. While the tactical approach of each manager has been crucial to these results, the lack of a dominant, defensively disciplined ‘enforcer’ sitting in front of the back four, marshalling the defence, breaking up play and starting the attacks has been obvious.

We will not miss Makélelé. His technique is average, he lacks the speed and skill to take the ball past opponents, and ninety percent of his distribution either goes backwards or sideways. He wasn’t a header of the ball and he rarely passed the ball more than three metres. Younger players will arrive who will cause Makélelé to be forgotten

Chelsea reached the Champions League Semi-Final for the first time in their history and finished second in the league. Ranieri was sacked, Jose Mourinho arrived, and Chelsea won two leagues titles in two years. They only conceded 15 goals in the first season and 22 the following year. This season, Chelsea had conceded 15 by the end of October. Makelele’s importance was highlighted by Mourinho after Chelsea’s incredible season; when Lampard and Terry were claiming all the individual honours, Jose stated he was ‘Chelsea’s Player of the Year’. A statement confirmed by Real Madrid’s legendary defender Fernando Hierro,

I think Claude has this kind of gift – he’s been the best player in the team for years but people just don’t notice him, don’t notice what he does. But you ask anyone at Real Madrid during the years we were talking about and they will tell you he was the best player at Real. We all knew, the players all knew he was the most important. The loss of Makélelé was the beginning of the end for Los Galacticos… You can see that it was also the beginning of a new dawn for Chelsea. He was the base, the key and I think he is the same to Chelsea now.

During the 2008/09 Liverpool enjoyed their most successful league campaign in the Premier League era, finishing second by four points (a record total for LFC), scoring the most goals and knocking Real Madrid out of the Champions League five-nil on aggregate. During that season, Rafa Benitez often played both players together in the same team, providing a solid platform for the attacking players to flourish.

Liverpool had one enforcer, screening the back four in Mascherano and one distributor in Alonso, finding the perfect pass, setting up a counter attack or just dictating the pace and tempo of the team. Lucas Leiva, since the departure of both players to Barcelona and Real Madrid respectively, has attempted to adopt both roles. With the disappointing performance of Christian Poulsen last year, Lucas made the most passes (1794) and the most successful tackles (111 – more than Carragher, Skrtel and Agger combined) and this effort was duly rewarded by being named player of the season.

All three of these players have played a crucial role in Manchester United’s success over the past four years. Sir Alex Ferguson even attributed Fletcher’s absence as the primary reason for the 2009 Champions League Final defeat to Barcelona. While Carrick has made the role his own this season, Ferguson had tried the blend the best elements from all three (including at times Ryan Giggs) into the crucial role just in front of the defence. If Fletcher has the energy, drive, tackling ability and tactical discipline to make up for the lack of Paul Scholes’ defensive ability, then that frees up Carrick and Scholes to dictate play for United going forward. Since Fletcher was diagnosed with a long-term kidney illness, Carrick has been used in deep lying midfield role more often. The constant injury problems of Tom Cleverley (perceived by many to be Scholes’ successor) has led to Carrick’s increased responsibility.

One crucial game this season, when Man Utd didn’t include, through choice or injury, either Fletcher, Carrick or Scholes, was away at FC Basel in the game that knocked them out of the Champions League. That day, Phil Jones played in the deep lying role, and United were left exposed at times. Here is the average position map from the game. Notice Jones’ positional inconsistency in the opening 15 mins, when FC Basel scored their opening goal.

Average for the whole game:

Phil Jones might yet turn out to be an outstanding holding midfielder, he certainly has all the attributes, but at 19 at the time, maybe a bit too much was expected of him.

The relative success of Tottenham this season is down to a number of factors, but the signing of Scott Parker who won the Football Writers’ Player of the Year last season, has been one of the most important. Again, similar parallels with the Mascherano/Alonso or Fletcher/Carrick/Scholes partnerships start to emerge.

Having that anchor has allowed Modric and Bale to flourish.

A lack of a disciplined, tactically aware holding midfielder, who can break up play, protect the back four and allow the more attacking-minded players to succeed has often been cited as a reason for Arsenal’s lack of silverware over the last five or six years. Flamini was snapped up after two successful seasons in that role at Arsenal in 2008, but Diaby and Song have both attempted it, with occasional glimpses of success, but on the whole would be regarded as failures, when compared with similar players at other top four clubs.

Perhaps the team with the most impressive set of central midfielder’s is Manchester City. Whereas last year Mancini  was being derided for setting his team up too defensively with Barry, De Jong and Yaya Toure all playing in the same game; this season he’s tended to play two of three and has included Nasri, Milner or Johnson alongside David Silva.

It is no coincidence that Manchester City struggled most when Y Toure and Kompany were missing during January. The solid foundation of Lescott, Kompany, Barry and Y Toure has been fundamental to City’s league success this season. Keeping those four players fit for the final stretch of the campaign will decide whether The Citizens ship sinks or, after so many years, floats to victory.

The arguments with friends, the clichés, the generalisations, the 'hallelujah' moment when I started to write it down and realised no-one could interrupt till I'd finished. Pure bliss. Now it's your turn below.