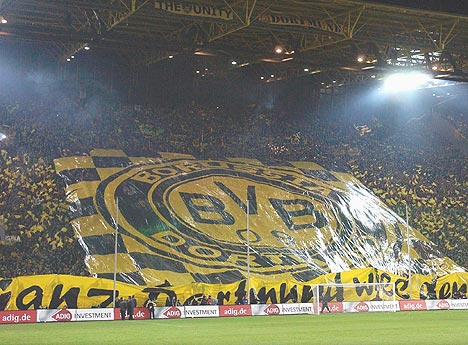 Across Europe, there is a view that the clubs with the biggest budgets tend to win the trophies, but is that just a stereotype or a fact of life we all have to live with?

Let’s start with England, where the obvious answer is yes, money did in fact buy the league title this year. Manchester City had a net spending on players of £35 million (player purchases minus player sales) and over the last five years have had a net spending of £369 million. That’s not to mention the money spent on paying these superstars, with a wage bill of £174 million last season (a Premier league record) and a wage to turnover ratio of 114% (the club pays more on wages than the total income it receives). This means they have easily outspent their rivals in the hunt for the title, though the fact they could only win the league on goal difference shows perhaps money isn’t everything in the premier league.

All in all, Sheikh Mansour has invested around £800 million into the club since buying it, which has allowed Manchester City to effectively buy the league by acquiring the best talent from around the globe; David Silva (£24 million), Yaya Toure (£24 million) and Sergio Aguero (£38 million) to name just a few. Though City shouldn’t be singled out, many clubs spend a lot of money to challenge for the title, it’s just Manchester City sped up the process so they wouldn’t be caught out by UEFA’s new Financial Fair Play rules set to come into action soon. Their colossal spending and wage bill could spark a new reign of dominance from Manchester City, showing money does indeed win the fight in England.

In Spain we see a similar story, as Real Madrid won the league title after a net spending over the last five years of around €432 million which just lags behind Manchester city as the highest amount spent in Europe. This includes the massive fees paid for players like Alonso (€30 million), Kaka (€67 million) and Cristiano Ronaldo (€96 million, a record transfer fee). This season Real Madrid were rather quiet for their standards, with their biggest signings Nuri Sahin (€10 million) and Fabio Coentrao (€30 million), but were still only outspent by Barcelona, Atletico Madrid and Malaga in the Spanish league, while there outlay over the last 5 years easily surpasses any other Spanish club. The club’s total wage bill was a reported €216 million last season (just behind Barcelona) and the club certainly enjoys one of the biggest budgets in the game.

However they are different to Manchester City in that their extraordinary high revenue (at €480 million last season) allows for such expenditure and earns Real Madrid a good profit each year. This is down to Real Madrid selling a lot of merchandise and negotiating their own TV deals separate from the Spanish league. The Spanish league is therefore dominated by Barcelona and Real Madrid as they have the biggest budgets, with the rest of teams not even coming close (Valencia finished 30-40 points behind Barcelona and Real Madrid this season in third place). Another countries league dominated by the super rich.

The next two countries, however, can boast victories for the financial underdogs. In Germany, Borussia Dortmund managed to defend their title despite the challenges from Germany’s financial heavy weight Bayern Munich. It is a mini miracle that they were even challenging after their financial meltdown in 2002-2005, where the club gambled on Champions league qualification to finance their big spending, a policy that backfired and lead to the club having to restructure itself from top to bottom. The club started to invest in young talented players that fitted around the energetic philosophy of the coach and have seen the rewards for their efforts in the last two years. The club’s revenue has grown from €96 million in 2007 to €139 million last year, showing the advances the club has made since their meltdown.

This is still nothing compared to Bayern Munich’s revenue in 2011 at €321 million, while the wage bills for both clubs last year were €156 million for Bayern Munich compared to just €57.4 million for Borussia Dortmund. This shows Borussia Dortmund managed to fight the odds to beat Bayern Munich for the last two years, and despite spending €17.5 million on new signing Marco Reus for next season, they should offset this cost through the sale of players (like Kagawa who is reported to be sold to Manchester United in the near future) showing the prudent methods of one of Germany’s best supported clubs.

The other country to go against the norm is France, where Montpellier came out of nowhere to win the French league from under Paris Saint-Germain noses. Montpellier has assembled a title winning team through cheap bargains and a strong leaning on the clubs youth system to produce talents like Younes Belhanda and Mapou Yanga-Mbiwa (the club captain). The club finished in a forgettable 14th position in the 2010/11 season and have played the majority of the last eight years in France’s second league, yet were able to finish top despite spending just €2 million last summer.

Paris Saint-Germain on the other hand was taken over by wealth Qatar owners at the start of the season and splashed €86.4 million on new players, just under half of the total transfer expenditure to occur in France this season. Their star signing Javier Pastore was bought for €42 million, more than Montpellier’s total budget at just €33 million. Comparing the wage bills, Montpellier had the 7th lowest in the French league, while Paris Saint-Germain are reportedly paying their coach Carlo Ancelotti €6 million a year and their star signing Javier Pastore €4.5 million a year, showing the excessive money the club is willing to spend on individuals. But despite this expenditure difference Montpellier were able to best Paris Saint-Germain and win the French League without such financial clout.

So we have two titles won by the biggest spenders and two titles won by the financial underdogs. To decide the argument, the Italian league champions are reviewed. The race was basically between AC Milan and Juventus, with Inter Milan and Roma having poor seasons. Juventus ended the victors, winning the league by 4 points and incredibly finishing the season unbeaten in the league. There is arguably no major financial giant in the Italian league, instead both Milan and Juventus have shown themselves to be poorly run clubs. AC Milan experienced losses in both 2010 and 2011 of nearly €70 million, in fact they haven’t made money for 6 years and that’s with big player sales like Kaka’s switch to Real Madrid for €67 million included.

Meanwhile, Juventus experienced an even bigger loss of €95.4 million last season and have been hit by not qualifying for the Champions League for the last two seasons. Milan beat Juventus in revenue terms, with €235 million last season compared to €154 million for Juventus, but has to pay much higher wages with a wage bill of €193 million last season compared to €140 million for Juventus. So in a competition for the best run club out of the two it hard to pick a winner, with both experiencing big losses, Milan having particularly large costs and Juventus having poor revenue (though this should change with qualification for the Champions League next season). Instead Napoli and Lazio can be credited as small clubs overachieving by qualifying for the Champions league and both achieving profits last season, showing their fiscal strength.

That still leaves the question of whether money wins out in winning league titles, with the score line drawn at 2-2. But looking back at Italy, even without a major financial player in the league, both Milan and Juventus can call on mass funds to finance their title challenges, even if it is getting them into some economic trouble. That gives the wealthy billionaires a crucial late winner in the score, showing that this season money really did make the difference. But the performances of Borussia Dortmund and especially Montpellier should not be forgotten and indeed show that money isn’t a necessity for success. Add to this the fact that UEFA’s Financial Fair Play rules could change the running of football clubs in the near future and we could see more surprising candidates challenging for Europe’s biggest titles, something I think everyone would like to see.

2 thoughts on “Does money buy success?”