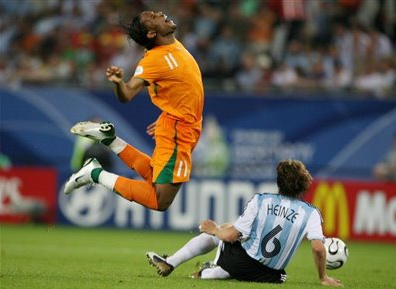 Only a couple of weeks ago, pundits and fans alike were tripping over one another to label Barcelona the “greatest club side of all time”. This was a side that embodied everything that is good about football in a footballing world where cheating has become an epidemic. The expectation levels reached fever pitch as this much lauded side prepared to take on their greatest rivals Real Madrid, in the biggest “derby” in football, El Clásico, on the greatest stage in club football, the Champions League. We expected fireworks. We expected goals. We expected drama. And whilst we got all three, what we certainly didn’t get, was a classic. An advert for football this most certainly was not.

What we got instead was a farcical back and forth contest of kicking and diving. The kicking, led by the likes of Arbeloa, Adebayor, Marcelo and Pepé typically came as Madrid tried desperately to win the ball back from a Barca team that hold on to it better than any other team I have ever seen.The diving was led by messrs Busquets, Pedro and Alvés. Fittingly, Pepé was harshly sent off in the end as a result of some exaggeration from Daniel Alvés, a reckless tackle no doubt, but not worthy of the few minutes writhing on the ground followed by being taken off on a stretcher (only to return to the pitch without so much as a hint of a limp merely seconds later) which likely helped seal his demise. The match was “saved” by Lionel Messi (who ironically committed the most fouls in the game!) whose individual brilliance shone above all of the nonsense.

The backlash was harsh. You’d swear football had never seen cheating before. Both teams were criticised from all angles for their antics. Barcelcona reported Madrid to UEFA for Mourinhos comments. And, quite intriguingly, Madrid sought suspensions for simulation. Which raised an interesting debate, and highlighted an issue, that footballs notoriously conservative governing bodies need to clamp down on. The question is though, who’s worse, the kickers or the divers? And could you have one without the other.

I cast my mind back to the 2010 World Cup Final, which will sadly be best remembered for the Dutch sending their martial arts team to the match by accident instead of their footballers. Howard Webb, eager to maintain the spectacle of the game, was reluctant to show a red card and subsequently the likes of van Bommell, De Jong and Heitinga were given free rein to use excessive force in trying to disrupt the Spanish passing game. The Spanish, seeing that, for example, a studs up kick to the sternum had somehow become only a yellow card offence, responded in kind by diving and rolling around the ground in an effort to perhaps acquire more protection for themselves by looking for yellow cards for every challenge. The end result was the biggest game in world football descending into a farce that showcased all that is wrong with modern football.

The common theme with both games is that both were high profile “adverts” for the game, contested by two teams of wildly differing styles, a passing team who “play the game the way it should be played” and who don’t rely on the defensive tactics that have ruled modern football, and a tough tackling team, who are more defensive minded, looking to counter attack at pace, in Madrid and the Netherlands. In both cases, it became a contrast of diving versus fouling.

In order to stamp out diving, there needs to be a harder line taken with reckless challenges. Traditionalists will argue that modern footballers are “soft” in comparison to the good old days, but there’s nothing soft about the injuries suffered by the likes of Eduardo da Silva, Aaron Ramsey, Hatem Ben Arfa or Stuart Holden. If you take rugby as an example, the spear tackle is enforced with a zero tolerance policy, the same way that tackles from behind are supposed to be handled. It has not lost any of its physical edge at all, in fact, it is more physical now than ever before, but with an emphasis on fairness. The onus is on the tackler, you can be as physical as you like, provided you ensure your opponent lands safely. If FIFA were to impose strict rules, and harsher punishments, regarding reckless challenges, then we would see an improvement in the standard of tackles seen, without compromising the physicality of football.

Sadly, no club can claim a moral high ground on this either. You think of Roy Keane flipping Alfie Haaland with a stamp to his thigh, Vieira’s repeated red cards at Arsenal, Paul Scholes’ disgusting challenge on Zabaleta a few weeks ago, Steven Gerrards two footed, studs up lunges, de Jong’s leg breakers on Holden and Ben Arfa or Michael Essien’s ankle stamps to name but a few. Even Barcelona, for all of their complaining about being kicked, used to pay Mark van Bommel’s wages. These examples are a mere dot in the ocean of footballers who are known to be reckless in a challenge.

I enjoy nothing less than seeing players going to ground feigning injury, and I agree that football needs to stamp out (for want of a better term) diving with harsher penalties for the culprits, but in order to do so it also needs to address how much is too much when it comes to being physical in a challenge. Sadly, the divers are somewhat of a product of the hatchet men and until both are dealth with equally, we will always have one encouraging the other. Players who dive gain reputations for it and eventually their reputation serves to hurt them more than to protect them.
Think of Nani at Anfield this year, legitimately aggrieved not to see a red card shown to Carragher and unable to continue the game due to the foul. Had that foul been committed on someone like, for example, Park ji Sung, it is hard to imagine that Carragher would have been spared a red. Nani’s reputation left a doubt in the mind as to just how severe the injury was. Perhaps the hard tacklers feel that they can go in harder on players like Nani, as the element of doubt lessens the chance of them being punished. There is a ripple effect.

Both sides need to be dealt with severely in order to buck this worrying trend. The onus is on the likes of FIFA and UEFA, those with the real power to change the game for the better, to take the proactive steps needed to clean the game up and rid it of cheating, of all kinds.