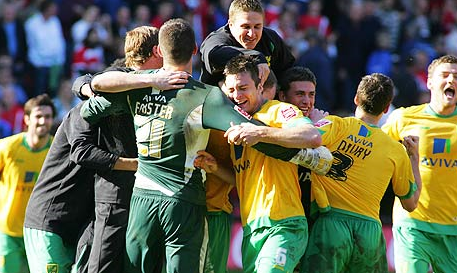 The end of March signals many changes in football. The clocks go forward, allowing fans to attend matches in replica shirts and shorts and create a party atmosphere with inflatables – plus points become like gold dust in the race for glory and the murky scrap for survival. Whilst the fans stand chilly with their ankles on show as temperatures nudge 15 degrees – it’s the British way – there are some real hidden gems to be discovered during frantic celebrations towards the end of the season. In celebrating Simeon Jackson’s late, late winner against Derby which all but cemented Norwich’s march to the Premier League, one gentleman decided to take matters into his own hands.

As a huge scrum of yellow shirts converged in front of the players, as seen here, a maverick decides to rage against the apparently shameful Aviva advertising. He makes an ungraceful pencil jump to the pitch about two yards in front of him, and aims a crushing WWE style drop kick at the board. That, or he just failed miserably in getting onto the pitch. BPF prefers the first scenario, as it’s just funnier. The comedy value accelerates as Grant Holt on the right mentions the event to a team-mate before the individual is ushered back by a sympathetic steward. Aviva’s favourite son, Paul Whitehouse, was reportedly sickened by the events.

It seems late goals at the end of the season are always a catalyst for a bit of reckless abandon in the stands, mostly with comical consequences. In League One’s south coast derby this season, runaway title winners Brighton went down to Southampton’s 89th minute Jose Fonte winner. The Saints’ fans joy spilled out of the stands, quite literally. Jammed into the ramshackle Withdean Stadium away end, the travelling supporters toppled over the barrier and rolled out of the stand in a scene reminiscent of one of those brilliant playground bundles. Southampton’s players ran across the athletics track towards their fans, and incredibly enough, didn’t even order a taxi and decided to travel the 13 miles from the pitch to the Withdean crowd by foot.

One of Brighton’s former managers, Steve Coppell, is usually such a sombre and reserved man – you’d never liken him to Jose Mourinho, a manager whose tongue is as abrasive and sharp as they come. However, in the aftermath of his Reading side’s promotion against Leicester in 2005, Coppell emulated the special one and hurled his jacket into the legions of visiting Reading fans, in a drastically un-Coppell-like moment.

Coppell’s defender, Ivar Ingimarsson, was similarly forceful in his hailing of events. After the match, he was interviewed on the pitch by a local journalist. He was asked how he felt about the side’s promotion. Ingimarsson showed that he is clearly not one to throw around clichés about just getting three points for the gaffer or not looking more than one game ahead. No, he’s apparently far more articulate than that. “Fucking brilliant” he replied, then adding “oops – sorry” due to his remembering that he was actually on live radio.

According to this picture, all the film stars were out to view the scripting of Reading’s unstoppable rise to the Premier League. After pronouncing the Championship dead, one wonders what happened when the Royals’ second season in the top flight played like a drab horror sequel and ended in relegation.

There is almost a sense of cinema or theatre to the end of season celebrations. The inevitable pitch invasion has the same grand aura of a big fight scene to bring an action epic to a close. In 2005, when West Brom celebrated being a jot better than three other awful Premier League sides and finished 17th with a measly 34 points, Kieran Richardson played a leading role.

After Richardson’s dominant performances and three goals in 12 games for the Baggies, he was held upon fans’ shoulders on the pitch after their 2-0 victory over Portsmouth. The versatile England international could have stayed at Manchester United and benchwarmed on relatively generous wages, but chose to help the Black Country side in their desperate swashbuckling at the basement of the Premier League.

QPR’s very own pitch invasion after their 1-1 draw against Hull last month left their fans deflated and scarlet-faced. The last-gasp Jackson clincher for Norwich meant that Rangers were not mathematically promoted for another week. Of course, manager Neil Warnock was mobbed on the Loftus Road pitch after the match – the fans ignoring his bemused complexion. Were they up? What was the news from Norwich?

All of these permutations unfold before the eyes and add such drama to the end of the season. Fans and players alike are left alone to await results as their hopes dangle treacherously. When the West Londoners finally sealed the inevitable at Watford, the celebrations were frenzied. Heralded talents Alejandro Faurlin and Adel Taarabt sprinted towards the visiting fans, flailing their arms like children.

The curtain drawing on another season sees the veneer of footballers drop slightly. Nine months of supposedly grounded PR vacuums sprouting out the same old mundane clichés are concluded with wild celebrations. This time of the season brings out the human, emotive side of footballers and puts them in the same light as fans savouring a goal in ecstasy. So often, promoted teams celebrate by sliding on their chests in front of their fans and throwing champagne around.

Goals scored in the next week or so could make or break a team’s history – Rochdale are on the brink of the second tier for the first time ever and AFC Wimbledon’s remarkable rise through the divisions could culminate in league football next season. With so much to play for, expect more morphsuits dancing about the stands, hugging of overweight bald strangers after goals, and of course, drop kicking the face of brand advertising.