Waterford has had its share of visitors over the centuries, ever since the Vikings first set up shop there back in the 9th Century.

The football team have been no different, whether it was former World Cup winner Bobby Charlton, Polish international Piotr Suski or the Coventry born duo of Johnny Matthews and Peter Thomas who would enjoy great success down on the south coast, all playing in the blue of the city at one stage or other. 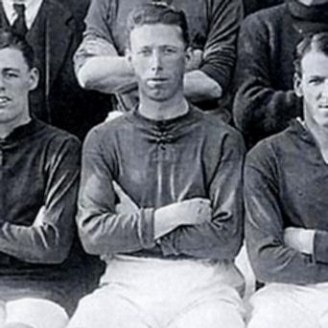 In his recent, meticulously researched history of soccer in Munster, David Toms goes into some detail in the development of the sport in the southern province and he focuses especially on developments in urban centres like Cork, Limerick and Waterford.

What Toms’ research shows is that the Waterford predilection for a British footballing import has a long history. In 1930, despite the city suffering significant unemployment levels as well as the economics effects of the Great Depression the city’s business community and local football supporters embarked on a significant fundraising venture.

Their aim? To provide sufficient funds to have a competitive Waterford team in the League of Ireland.

To compete with the likes of Shelbourne, Bohemians, Dundalk and Shamrock Rovers it was felt that Waterford FC would need to invest in bringing in some quality professional imports to play along home grown stars like Alfie Hale Sr. and future Ireland international Tom Arrigan.

Brought in as player-coach was former Brighton and Manchester City player Jack Doran who had been capped three times by Ireland and he used his connections in the game to recruit a number of players with experience of the English league.

In fact for Waterford’s opening fixture in league football seven out of their starting XI were players who had some experience of cross-channel football. That opening game was in front of 10,000 spectators in the Dundalk Athletic Grounds on August 24th 1930 where the fledgling Waterford site were defeated 7-3 by the home side.

It was somewhat of an inauspicious start for the Munster side but their undoubted star on the day was an Englishman named Dick Forshaw who scored Waterford’s first goal in league football. Forshaw opened the scoring in the match against Dundalk and was unlucky not to grab a second as he struck the post late on in the second half.

He’d grab two goals the following week in Waterford’s first home league fixture as they secured their first win of the season, a 3-2 victory over St. James’s Gate.

That Forshaw was such as instant success should not be that surprising, although he had just turned 35 before he made his Waterford debut he had until very recently been playing in the English second division for Wolves. Prior to that he had enjoyed an illustrious and record-making career with both Liverpool and Everton.

Born in the Lancashire town of Preston in 1895, Forshaw had joined the British army as a young man and spent some time during World War I stationed in the British colony of Ceylon (modern day Sri Lanka), at the time a fairly favourable posting as the area was spared the sort of brutality endured on the like of the Western Front.

Upon returning to Britain he was signed by Liverpool manager George Patterson and made his debut for the Reds in September of 1919 with the Evening Telegraph describing him as a hockey and tennis enthusiast who was destined to “develop into a top-notcher”.

Forshaw was a skilful right sided inside-forward, his early seasons for Liverpool weren’t prolific in goal scoring terms but he did tend to enjoy “purple patches”, for instance he grabbed a hat-trick against Derby County in his first season.

Dick’s progress in those early seasons was steady, he became a first team regular as Liverpool enjoyed consecutive fourth place finishes, it was however in the 1921-22 and 1922-23 seasons that Forshaw would really make his name.

It was in these seasons that Liverpool would win back to back titles and Forshaw wouldn’t miss a single league game for those two years, chipping in with an impressive 36 goals from 84 matches, second only to centre forward Harry Chambers in the club’s goalscoring stakes.

One of his team-mates in that Liverpool side was Wexford man Billy Lacey who he would encounter again as player-manager of Cork Bohemians during Forshaw’s soujourn with Waterford.

Although further titles would elude Liverpool for the next two decades Forshaw continued his good form including a knack of scoring hat-tricks against Manchester United. In fact he scored three against United at Anfield two seasons running in 1925 and 1926! In all he scored seven hat-tricks in his time at Anfield and also jointly holds the record (with John Aldridge) for scoring in the most consecutive games (nine in case you’re wondering) in one season.

It wasn’t just with Liverpool that Forshaw made history, he made history by leaving the club as well. Despite playing well during the 1926-27 season (he was on 14 league goals at the time of his departure) the club sold him for £3750 to city rivals Everton in March of 1927.

While this was a significant sum at the time (the transfer record was the £6500 Sunderland paid for Bob Kelly) especially for a man that was nearly 32, it still came as somewhat of a shock to the Liverpool faithful and to Forshaw and his family. As was the style of the time this was something agreed by the Directors of the two clubs with no discussion with the player. His wife was said to have declared:

I have never been an Evertonian and I don’t know what I shall do about it.

By the time he left he had scored 123 goals in 288 games for the Reds in all competitions.

Success followed Forshaw to Goodison Park however and he made history by becoming the first, and so far only man, to win league titles with both Everton and Liverpool when he was part of the triumphant Everton side of 1927-28. Central to this achievement of course was “Dixie” Dean who would score his record breaking 60 league goals that season, he was helped in part by his forward partner Forshaw.

However by the start of the 1929 season Forshaw was on the move again, aged 34 he signed for a “substantial fee” to second division Wolves. He was only there a matter of months before he handed in a transfer request and began somewhat of a peripatetic existence, popping up at non-league sides like Hednesford Town and Rhyl Athletic (now simply Rhyl FC) for short spells.

It was in this set of circumstances that John Doran was able to sign Forshaw for Waterford, only two years after he was playing alongside Dixie Dean and winning a Championship with Everton.

Dean of course, would also enjoy a spell in the League of Ireland in the 1930s, spending some time on the books of Sligo Rovers in 1939 and scoring a club record 5 goals against a hapless Waterford side, however by that stage Forshaw was long gone and his life after football was filled with more tragedy than joy.

Within a year of leaving Waterford Forshaw was up in court charged with defrauding an acquaintance of his, one Richard Green. In April 1932 Green had given Forshaw £100 to place a bet on a horse at Ascot, the horse won and Green of course expected to collect his winnings of over £2000, however Forshaw was nowhere to be found.

Not expecting the horse to win Forshaw had doctored betting slips to make it appear that he had placed the full wager when in fact he had only placed a couple of £2 bets and kept the remained of the stake money for himself.

Forshaw had acted, according to the judge, with “peculiar meanness”, and he gave little consideration to Forshaw’s justifications about needing the money.

Now aged 36, Forshaw claimed that due to an accident he had been forced to give up on his playing career, he had tried his hand at other trades and at the time of his trial was living in Kilburn, London and running a Fish and Chip shop with his wife. This carried little weight and the unfortunate ex-footballer was sentenced to 12 months of hard labour for his offence.

His difficulties did not end here, within months of completing his sentence Forshaw was back in court, when in November 1933 and listing his livelihood as a salesman, he pleaded guilty to four counts of theft and was sentenced to a further 17 months of hard labour. The next few years would repeat this pattern, release from gaol before almost immediate re-arrest, mainly for offences like theft.

In 1937, then he was in the dock on two counts of theft. Only hours after release from his previous sentence Forshaw had gone out drinking, he had stolen some silverware from a London hotel before drunkenly stealing two suitcases from Euston train station.

At the trial the magistrate spoke to Forshaw, a married man, father of three who was now stuck in a cycle of crime and punishment, he said the following to Forshaw as he told him he was likely to face imprisonment with hard labour;

I want you to take warning from this. Can’t you pull yourself up before it is too late?

That’s what I want to do.

Forshaw would pass away in 1963, in what was an era of dominance for his former clubs, Everton winning the league in 1962-63 and Liverpool bringing the title across Stanley Park the following year.

Waterford too were improving, the finished second in the 1962/63 season with Mick Lynch taking up the role as the side’s main attacking threat.

Lynch, who was a friend of Coventry City manager Jimmy Hill used that connection to bring over the likes of goalkeeper Peter Thomas and Johnny Matthews to Waterford where they would help (along with the likes of the returning Alfie Hale) bring unprecedented success to the south coast by the end of the decade.

Forshaw played a small part in helping to establish a league footfall foothold in the city, Waterford finished a credible ninth in their first season of league football and even picked up some silverware with a victory of the League of Ireland shield.

Despite the hardship of his later life it’s worth remembering his small contribution to the growth of football in Ireland.

There is some great further reading available at the excellent Play up, Liverpool.