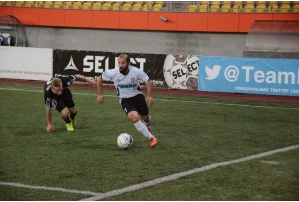 September in Tyumen is rubbish. Glorious late summer afternoons give way to miserable autumn mornings, or to be more precise, pre-winter. The roads around the city are being torn up in the annual rush to relay the hideously uneven surfaces before the deep freeze arrives (and these really are the best roads in Russia).

This leaves the centre looking like a giant’s playground with diggers strewn around the streets as traffic winds its way between the haphazard jungle of roadwork signs. Children return to school on the traditional September 1 start date with as much genuine enthusiasm as Micky Quinn being told to run. And of course, FC Tyumen have their usual frustrating wobble.

In a way, the link to the school year starting is appropriate; the FNL is fast becoming an unforgiving place where lessons are being doled out at the rate of knots, and the new students are struggling to learn quickly enough. The month began with a slightly unsatisfactory transfer window slamming shut, leaving the club with the slimmest squad in the league with only 23 players, and just two full-time centre backs remaining.

You might think the defence has been the major issue, but despite picking up only one point from a possible twelve, each defeat has been by a one-goal margin. The most galling was the glamour match (no sniggering at the back there) against last season’s Russian Cup sixth round opponents Tom Tomsk, then still in the Premier League.

A Cleyton-inspired first half of domination yielded a mere one-goal lead via a Evgeniy Savin penalty, but that unfathomable fear of victory closed in and two simple headers, well taken as they were, gifted the visitors a smash and grab three points. The problem for the flash new kids on the block is that in football there is no headmaster who will stop the bigger stronger kids bullying them out of winning.

With the disappointing early exit from the cup at the hands of Syzran 2003, a chance to focus on the league should have seen more collective drive to finish off games, but straight up was a 2-1 reverse away to Sokol decided by an 88th minute winner. In a game where the momentum swung back and forth, it was a sickening blow, especially after Lado picked up an injury that will keep him out until after the winter break, with an operation due in two weeks. Vladimir Kuleshov, perhaps tired of having to fill in at the back, thumped an impressive header after an hour to become the club’s second top scorer, but the clinical mark of champions, being able to finish off opponents, eluded them once again.

With the Tom game sandwiched between two away matches, the team was always likely to resemble an unfinished job this month, a bit like the city’s streets. Having to face the league leaders Tosno at their place after two narrow defeats was not the best tonic. Again, a goal in the final quarter of the match, this time from Andrey Pazin, was enough to see off Tyumen, and throw them right back into an unsavoury relegation battle. At least some face was saved by the entertaining trip to Sakhalin, the furthest away fixture on the oil-producing island mere kilometres from Japan.

A busy match included eight substitutions, eight yellow cards, three Ukranians, two shots against the woodwork, and fortunately one clean sheet. It wasn’t meant to be like this; breaking up for summer on a wave of confidence after passing the nerve-wracking final exam with flying colours, the squad have created their own demons that will take all of Galkin’s silver fox suaveness to overcome.

Let’s refer to Jose Mourinho’s favourite mode of transport for a moment. Where others have resorted to ‘parking the автобус’ when times are hard, Galkin has refused to sway from his attacking instincts, and scorelines show he isn’t far away from getting it right. Even with one centre back on injections (Guz’) he has simply moulded other players into a system that can provide cover for the backline – Kuleshov continues to fill in as the David Luiz to Golyatkin’s Gary Cahill, and different combinations of emergency defenders have been tried out in training, including Sergey Danilov, Dmitry Zarva and even Mamtov.

Gary Neville’s comparison of Luiz to a playstation player (personally I think the psychotic clown Sideshow Bob from the Simpsons is more accurate) is not a label you would throw at Kuleshov – his positioning is far more sensible. When he does venture forward, however, his head swimming with memories of his days as a forward at Gazovik Orenburg, he tends to get a slight nosebleed high up the pitch. More revision of his past tenses needed, to put a language teacher’s spin on his development.

The focus on adaptability is heartening despite the lack of tangible results. The double pivot of Klenkin and Kanaev provide some much needed stability, but their partnership in the middle of the park is just about the only outfield position that has not been occupied at one point by an out of position player. Klenkin in particular provides the sharp moves, a bit like his amazing hip hop dancing at the official end of year celebrations, while Kanaev croons his way through matches, smoothly moving play along á la Michael Carrick. This has allowed a trident of Mamtov, Cleyton and Samsonov to thread balls through for Savin to think about.

There is not long to go until the winter break brings some respite to Tyumen and their fellow FNL teams. The bizarre nature of the realligned Russian calendar will definitely work in their favour in the short term, with the four month break allowing matron time to tend to the sick bay inhabitants, but will also throw up the alarming possibility of bigger clubs poaching Cleyton in their own mid-season restructuring.

It will be a mark of the club’s organisation and ambition if they manage to bring in a couple of experienced defenders and hold onto their prize asset. At the end of the first term, five points clear of the relegation places with a record of played 13, won 4, drawn 3, lost 6, the report card would read something like this:

“B- : flashes of intelligence, but must show more determination.”