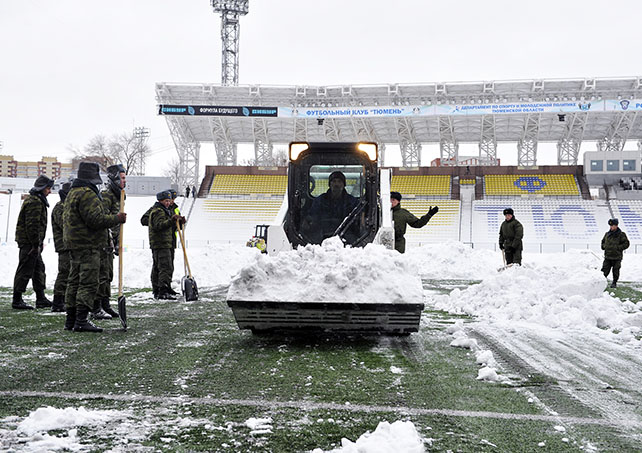 You know the saying about waiting ages for a bus, then two come at once? Well this simply doesn’t apply to Tyumen and victories; more like wait ages for a bus, then one will eventually come, but that’s usually it for a while. On the other hand, it definitely does apply to the ridiculous weather – wait half a year for snow, then it all arrives at once.

The day before the big shots from Makhachkala rolled into town – rolled being the correct term, as they were diverted on their flight from Moscow to Ekaterinburg, from where they took a 5-hour train – out of nowhere at least two feet of snow arrived coating the Geolog and the whole city in a thick blanket.

The most eagerly anticipated home game of the season was in danger of not going ahead at all. Attempts to clear the enormous volume of snow inexplicably began only an hour before kickoff with one large tractor and its tiny cousin to help the volunteers, despite the snow taking a break from falling four hours before the start. Anyway, in the end, after various ruffled feathers and hullabaloo, we kicked off against the favourites for promotion.

The script at this point reads that the grizzled Russian hard men took the physical, confrontational game by the scruff of the neck while the pampered Brazilians and Africans shivered meekly on the fringes of the game, but then this is Russia: so the opposite happened.

Yannick Bolli was a class above on the ball, seemingly finding the conditions no different from the parks of Paris where he grew up, while playmaker Ilya Maximov pulled the strings behind him. A wonderfully taken volley from the Ivorian-born hitman came from as perfect a cross as you will ever see midway through the first half, and in truth, always looked like being enough. A fear of winning seem to seep into Tyumen’s play, although there were some golden opportunities to score, most notably captain Khasan Mamtov’s six-yard unmarked header and Andrei Chukhlei’s late swerving effort that clipped the bar.

What they have needed all season is a striker with supreme confidence as a foil for Mamtov, but so far Evgeniy Savin has struggled in front of goal, his three strikes all coming from the penalty spot. He will come good – you don’t win under-21 caps and receive a call up to the full national squad without having some class – but he needs an ego-boosting game with a couple of selfish goals to set him off. He is popular with the fans, and with a creative midfield scheming behind him chances will come.

After the FNL registration window slammed shut, it felt like a Siberian version of Manchester United’s new transfer policy had taken shape as creative midfielders and strikers arrived, but nobody to plugs the gaping holes in defence. A little fun never hurt anyone, but a losing games by narrow margins always does.

However, the month began with a crucial morale booster as Sibir were thrashed at the Geolog, as Cleyton emphatically trebled his account with a brace in the driving rain. Mamtov and the resurgent Volodymyr Korobka sealed the win as the strength in-depth going forward was demonstrated. It was particularly pleasing to see Korobka earn recognition for his intelligent wing play, and his form, along with that of Belarussian international Andrei Chukhlei, means that the likes of Oleg Samsonov and Savin have their work cut out to keep the places in the starting line up.

The most frightening thing this Halloween for Tyumen has been the league table. After only one win in the last eight matches, we are now hanging onto safety by one place, with all the teams below us enjoying something of a mini-revival. Dinamo St Petersburg looked sunk before the season had really got going, but they have pulled off two wins from their last five, including a vital 1-0 again Khimik to claw their way off the foot of the table at the expense of the men from Dzerzhinsk.

A creditable point in Kaliningrad for Tyumen, thanks to Savin’s 93rd minute penalty after Dmitry Guz’ had been sent off, has maintained some breathing space between us and the rest of the pack, but the return game against Dinamo in two weeks’ time is taking on even more significant proportions.

Five matches, three at home, one long winter break to recuperate. November will be critical in determining the outcome of the season, but quite frankly getting through to the midseason hiatus without any more major injuries or defeats would be a huge accomplishment. Remember, remember, sign a bleeding centre back Galkin!