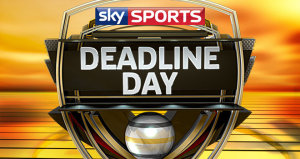 The gaudy display of Sky Sports News’ relentless regurgitation of speculation, nonsense, and occasional truth on Transfer Deadline Day (or last Monday night, as the rest of us know it) reminded us all of how ludicrous the sums of money being bandied around in the English Premier League are.

A mind-boggling transfer window spending total of over £800million saw the British transfer record broken with Angel Di Maria arrive at Old Trafford for around £60 million, and squad players arrive for a ‘mere’ £10 million. Liverpool became the new Tottenham as they splurged more than they probably needed too after selling their prize asset to Spain. Ed Woodward and Harry Redknapp probably fantasize about nights like these, but it is refreshing to watch from afar in a world where the entire budget of a club would not even cover a year’s salary of a decent Manchester City squad player.

Of course the big news this side of the Ural mountains has been the signing of Brazilian maestro (are any Brazilians actually boring?) Cleyton from Portuguese Liga Sagres side Academica Coimbra. He has played in Europa League games against some impressive opposition, and brings some panache to the midfield that has been missing since floppy blonde Pimenov returned to Kamaz. 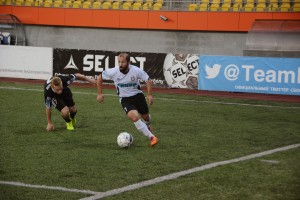 Oleg Samsonov has joined as a free agent after being released by Krasnodar in the summer, and former Russia under-21 international Evgeniy Savin has bolstered the attacking ranks as a stylish lone striker offering increased competition for places. Both Cleyton and Savin have scored their first goals for the club already, and look set to become firm crowd favourites.

Of course this might not go down well with little lightning-footed Lado. Our talisman has found game time hard to come by recently, but still managed to cement his position as King of the Geolog with a sublime finish from a very narrow angle against Khimik Dzerzhinsk. Despite Tyumen taking early control with a beautifully crafted tap in from six yards by samba king Cleyton (can any Brazilians not dance?) and a ice-cool Savin penalty, winless Khimik ruffled a few feathers with Tajik teenager Parvizchon Umbaraev’s brilliant but simple finish right after the break before Lado’s heroics.

The three goal celebrations were a microcosm of the mood around the club at the moment. Lado’s sheer unbridled joy as his team mates hoisted him high on their shoulders in celebration was delightful to see; no sulking even though he hasn’t started since the first three games, and he is clearly held in high regard by his fellow squad members.

All the others attempted to join in with Cleyton’s fancy footwork after his goal, and despite not quite being in time, it spread a smile across their faces. Savin? Just a simple finger in the air, as if he always knew he was going to slot his penalty – this kind of assured self-confidence will be invaluable in avoiding being overawed by more illustrious, experienced opposition, especially with the visits of Tom and Anzhi coming up over the next few weeks. 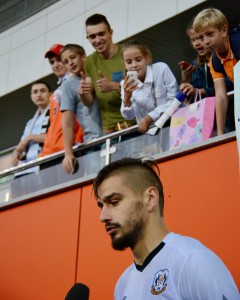 Manager Konstantin Galkin has steadily built up the squad into a reasonably well-balanced outfit, although he has said he needs to replace Nikita Fursin, the giant defender who left three weeks ago to join Fakel. The club’s failure to sign a replacement means only Sergey Golyatkin and Dmitry Guz’ remain as recognised centre halves, leaving Vladimir Kuleshov’s Liam Gallagher-esque mop to sweep up what little first-half attacking threat Dzerzhinsk offered.

The month started poorly as two consecutive defeats brought Tyumen down to earth with a bump. First up was a visit to Krilya Sovetov, whose future stadium in Samara will host matches at the World Cup. Managed by former Anderlecht, Sporting Lisbon and Belgium coach Franky Vercauten, Krilya had just come down from the Premier League and had kept some experienced players, so it was always likely to be a tough ask.

Former Zenit, Rubin Kazan and Blackpool (how often will St Petersburg, ‘The Paris of the North’, be uttered in the same breath as Blackpool, ‘The Vegas of the North’?) striker Sergey Kornilenko opened the scoring before Denis Tkachuk added a second. Dmitry Zarva pulled one back in a rare appearance – Savin’s rock and roll side parting only swept into town the week after – but it was not enough to avoid defeat.

The ghost of seasons past returned to haunt FC Tyumen again as the once prodigal son turned bogeyman Stanislav Prokofeev simply changed his strip to find a new way to taunt his old pals. Perhaps that’s slightly inaccurate, as only two players, Andrey Pavlenko and Dmitry Zarva, remain in the squad from his days at the Geolog, and both of them had spells away before returning. Luch Energiya Vladivostok’s two jubilant and dedicated fans were delighted to travel five time zones to see a scrappy one nil win, and they were rewarded by a heart-warming chat with their team after the game.

As my colleague Jonny and I waited for the press conference to begin, we inadvertently overheard an audible argument erupt in the away team dressing room. Moments later, two players left and sulked outside on the pavement waiting for the team bus to arrive, while the tight-polo-shirted manager Aleksandr Grigoryan stalked backwards and forwards, puffing furiously on what was clearly a much-needed cigarette. Jonny strolled over and cadged a fag off the victorious Grigoryan, and then watched as the two naughty step players were gradually persuaded to join the others on the bus. 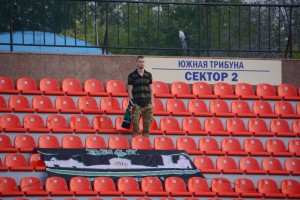 Quite what the argument centered around we didn’t know, but to think that this was right in front of the stadium in full view of spectators making their way home was eye-opening. If this had been the Championship in England, Sky Sports News would have been all over the incident before you could say ‘Kia Joorabchian’.

Overcoming adversity is going to be an important characterictic Tyumen will need in what is sure to be a challenging season, and character is what they showed in the next match away to SKA Khabarovsk. Cleyton’s debut took the headlines (well, the headline that I wrote in my match report anyway) as he electrified his new side in the closing stages and inspired an equalizer through Ukranian wideman Vladimir Korobka’s debut goal.

They had in fact dominated proceedings for the vast majority of the first half, only to watch a ridiculously opportunistic 40 yard volley from Vasiliy Pletin, who had only come on a minute earlier, swerve unstoppably over Renat Sokolov’s head two minutes before the break.

In sweltering conditions that demanded not one but two drinks breaks, the mental strength to keep putting in the hard yards paid off, as a valuable point was taken back down the Trans-Siberian railway.

With the transfer madness now over, Galkin can look to getting on with actually playing some football with his remodelled squad. There is plenty of youthful exuberance in Nodar Kavataradze that will come to fruition with time, plenty of competition for places, and a healthy dose of reality that this will not be a cakewalk. If anyone threatens to derail the project, we’ll just tell Lado they laughed at his thinning hair.