November 1st 1975 was a Saturday. I know this because I have the programme from Kettering v Boston United in the FA Cup. It was a 4th qualifying round tie, and as a 12-year-old, I knew little about the competition’s early rounds.

This was my first non-League match after early years spent watching Division One football in London. But my memories of the day are still strong for two reasons; a classic match ended 4-3 to the visitors after Kettering had led 2-0, and the programme is now part of my collection; a tangible momento from 45 years ago. 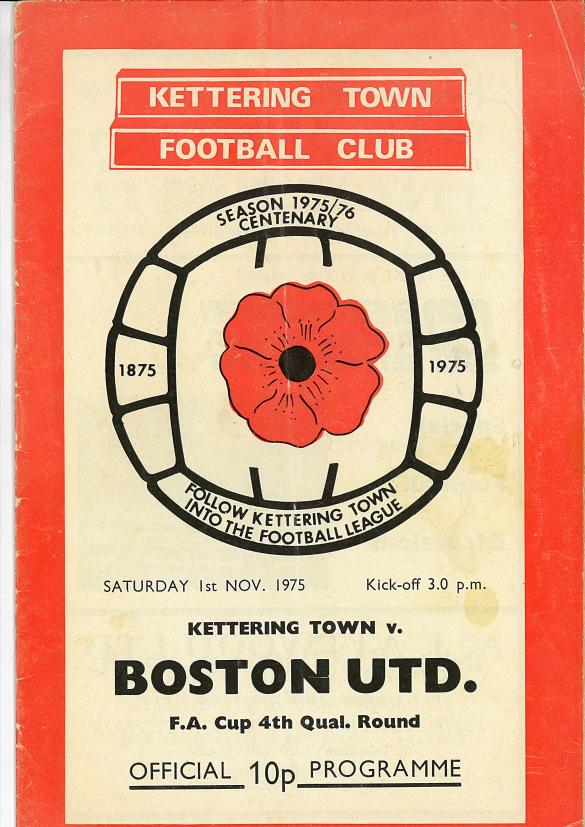 I remember the frosty November air, the cigarette smoke, the bell-ringing monk and the frantic atmosphere as the evening drew in and Boston – then Northern Premier League champions – clawed back Kettering’s lead.

The visitors’ first goal came from one Howard Wilkinson, and the win earned Boston a home tie with Lincoln City in round one. I was hooked from then on, and saw eight more Kettering games that season – including the fogged off, twice-played Bedford match, and the County Cup ties with Northampton and Corby. I made the mistake of not buying a programme for the Corby game, something I have yet to put right.

It’s the programmes that provide a link with the past, and offer a snapshot of footballing life during Kettering’s centenary season. The previous season’s fourth place (marked in the league table) indicated the Poppies’ ambitions, with the front page slogan; “Follow Kettering Town into the Football League” adding an air of optimism that was not reflected on the pitch. But in late-season, the names ‘Derek Dougan’ and ‘Billy Kellock’ in the appearances column were a sign of better things.

They duly arrived the following August as Kettering, under Dougan’s tutelage, reached the third round of the FA Cup, with Oxford United and Tooting overcome before Colchester won at Rockingham Road. Dougan himself scored in the Oxford replay after Geoff Merrick had earned the Poppies a draw in the first game.

On December 4th, a week before the Tooting tie, Chelmsford’s line-up included an ageing Jimmy Greaves, with a rather younger Nigel Spink (“17 year old, joined the club from village side Roxwell”) between the posts. Six years later, as a sub for Aston Villa, he would hold Bayern at bay in Rotterdam. 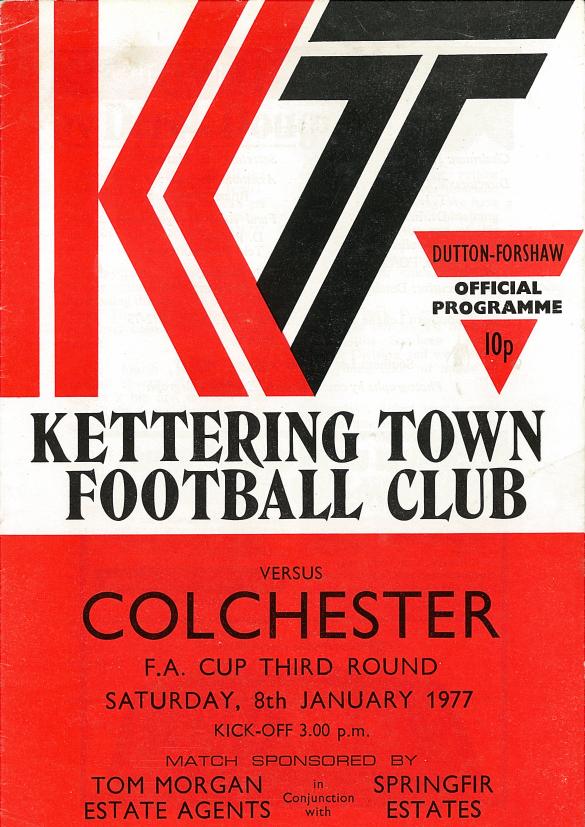 The Tooting game came amidst a 26-game unbeaten run that took Kettering to the top of the Southern League, with Roy Clayton emerging from the fog to get the vital goal near the end. The programme meanwhile, promoted the derided fashions of the time, with a centre-spread ad for ‘warm winter wear’, including duffle coats, parkas and snorkel parkas (“the heavy duty one”) – yours for just £12.95.

In his notes, Dougan claimed that the FA Cup “really starts when the third round draw is made…..that is the incentive that we all need.” On the Fixtures and Facts page, meanwhile, was a warning from Ted Croker of the FA, threatening ground closure if the crowd trouble seen against Oxford was repeated. It wasn’t, as far as we could see; which against Tooting wasn’t very far.

The following Monday, Kettering got the home draw they wanted, but against division four pacesetters Colchester. The U’s affirmed their status by racing into a 3-0 lead that proved decisive, despite Kellock and Clayton’s late ripostes.

A post-Christmas slump, including two defeats to lowly Margate, cost Kettering the league. By the time Gravesend visited on 23rd April, the Poppies were third behind Bath City and eventual champions, and Football League members-elect, Wimbledon.

I have all the programmes described above, except the aforementioned Corby issue. That game took place on 24th April 1976 and ended 0-0, but I have no ‘proof’ as I have yet to track the programme down. If I do, I can complete my collection, and get on with my life.

So if anyone has a copy, or even a photocopy – yes, I am that desperate – please email me. You would make an ageing anorak very happy.

This article first appeared in the March 2021 issue of Programme Monthly and Football Collectable.