When Manchester City signed Kevin De Bruyne from VFL Wolfsburg a few months ago, many eyebrows were raised at the size of the reported £55 million transfer fee.

However, the 24-year-old has hit the ground running at the Etihad Stadium, with nine goals and eight assists already this season, and is a popular choice for tipsters on FanBet.

In his latest outing against Hull City in the Capital One Cup quarter finals, De Bruyne pounced on a loose back pass to score before firing home a free kick to pick up a handy brace in the 4-1 win.

That double came off the back of a dominant performance against Southampton on Saturday in the Premier League when scored once and has two assists to take home the Man of the Match award.

City have struggled massively with injuries this season, and Sergio Aguero, David Silva, Vincent Kompany, Gael Clichy and Pablo Zabaleta are among those to have missed significant game time, but De Bruyne has started all ten league games since debuting in September.

He has also contributed massively in the Champions League, scoring a superb last minute winning goal at home to Sevilla as he hammered a left foot shot into the bottom corner.

City boss Manuel Pellegrini believes that De Bruyne’s form is so good that he could be a big contender for the Premier League’s individual awards.

He has so many games between now and the end of the season but I’m sure he will continue and he will be involved in those awards. It’s important he keeps playing the way he has so far.

I always say the way we play is good for him with his style of football. I hope he will continue making good assistance and working the way he did and scoring goals is also important.

It’s only a few months since De Bruyne was labelled a “£60 million reject” by the Daily Mirror, a reference to his time at Chelsea where he played just three league games (nine in all competitions). 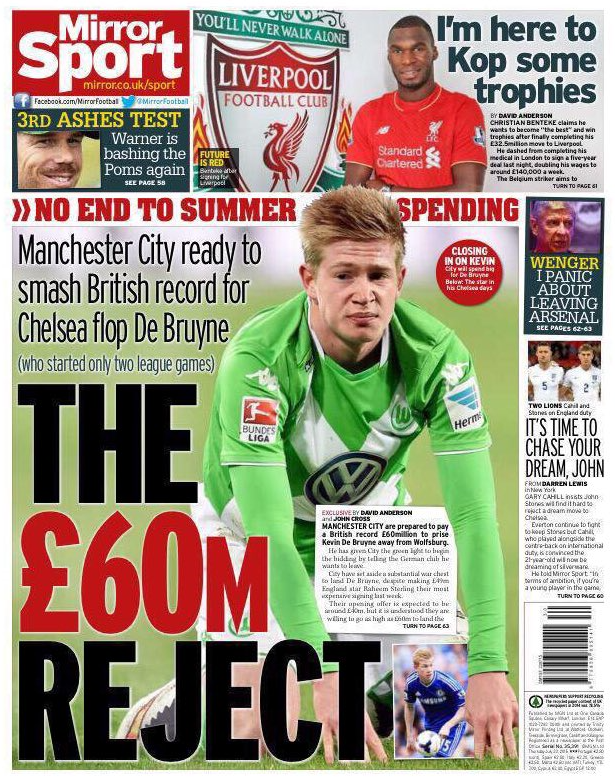 A reported falling out with Jose Mourinho over playing time saw the Belgian depart for the Bundesliga and VfL Wolfsburg in January 2014 and he went on to bag 16 goals in 51 games over the course of the 2014/15 campaign.

De Bruyne began the current season by helping Wolfsburg beat Bayern Munich to claim the DFL-Supercup before his return to England was confirmed on August 30.

At international level, De Bruyne is an integral part of the Belgian side that has jumped to number one on the FIFA rankings and is seen as a genuine contender for next summer’s European Championships.

One of the biggest criticisms of Manchester City over the last year or so has been their lack of re-generation as the likes of Silva, Kompany and Yaya Toure get older, but the acquisitions of De Bruyne and Raheem Sterling, and the emergence of Kelechi Iheanacho, is promising for the future.