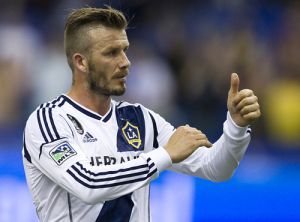 An East-end lad from a working class family grows up dreaming of becoming a footballer, when his teachers won’t accept “footballer” as an answer and ask him again, “What does he really want to be when he grows up?” The answer remains the same, a footballer, that’s all he wants to be. And he proves his teachers wrong, he becomes a footballer, plays for some of the biggest clubs on the planet, wins league titles in four different countries, wins the Champions League, is made Captain of his national team, he marries a popstar, becomes globally renowned and when he retires – well he only gets to own his own personal football team.

It might read like the plot from another awful football movie, a cross between When Saturday Comes and Goal! with its familiar themes and trite, clichéd and unbelievable storyline. But as often happens truth is stranger than fiction, the player in question is David Beckham, recently retired from professional football and now on the brink of his next venture, the creation of his own MLS franchise in Miami, Florida.

It is possible to see in this most recent move of his extraordinary sporting career an apotheosis of sorts for the humble football player; from the struggles of the early professionals and the formation of the players union, the challenges faced by football men like Billy Meredith, the “retain and transfer system” and the Eastham v Newcastle United case, all the way through to the Bosman ruling of the 1990’s to the rise of Beckham as a celebrity that transcends football, as the man so valued for his skill and status that he is now the boss. In Marxist terms he has gone from being used for his labour to effectively owning the means of production, in this case his own brand spanking new football club, and all for a knockdown price.

While Beckham may not be the first footballer to own a football club, Dave Whelan at Wigan Athletic or Francis Lee at Manchester City come to mind, he is in a way unique in the manner in which he has reached this position. In the cases of Whelan and Lee, the funds used to buy football clubs came from investments outside of the game, (Whelan’s JJB sports shop chain, and Lee’s from toilet roll manufacturing respectively) while Beckham has acquired his fortune before the age of 40 by his football talent and the celebrity status that he has successfully managed to cultivate around his career and personal life. Worth noting too is the fact that Beckham is not like some ex-pros investing in a smaller team in a smaller league but will be launching a team in one of North America’s largest cities in a rapidly growing league like the MLS. To put it in perspective, the rights to New York City FC, due to be launched in 2015 cost $100 million when they were purchased by the New York Yankees and Qatari backed Manchester City.  This is the level at which Beckham is now competing. Although this might seem unusual for an average pro it is more par for the course for Beckham.

If one looks at his time at Real Madrid he was able to avail of a tax law designed for foreign contract employees living in Spain. The law was supposedly created as a way to encourage high-powered executives to live in Spain, and for major multinationals to locate to Spain because their key staff would only have to pay tax on the income earned in Spain and would not be liable for income earned worldwide outside of the country. Beckham, as a foreigner under contract in Spain with significant non-Spanish earnings was among the first people to take advantage of this, although not necessarily designed with David in mind the law became known as the “Beckham law” . When making his move to LA Galaxy in 2007 the MLS reviewed its Salary Cap Protocols and introduced their Designated player rule to allow their clubs compete for top players and offer huge salaries that could rival those available from elite clubs in Europe. Unsurprisingly this change became known as the Beckham rule, which allowed David earn a club salary of $6.5 million per annum.

As part of his lucrative contract he also had the option to purchase a MLS franchise for a discounted price of $25 million which leads us back to the plans apparently afoot for his new team in Miami. Miami is considered a major potential growth market for an MLS side after the previous side, Miami Fusion shut down and there is scope for Beckham to set up a team before selling it on for a major profit to other sporting investors. While perhaps not as well- known as a Roman Abramovich the MLS has plenty of billionaire investors, men like Microsoft co-founder Paul Allen or LA Galaxy’s Philip Anschutz on top of the massive investments being made in the New York market by Manchester City’s Qatari owners, there would be plenty of interest should Beckham decide on a quick sale.

While often mocked for his soft-spoken interview persona, perceived lack of intelligence or even the claims that his success was disproportionate to his skill on the football pitch Beckham has broken new ground for footballers in ways that Billy Meredith and his colleagues could never have imagined when in 1907 they formed the organisation that we know today as the PFA. Back then they fought for freedom of movement; as players their registrations were owned by their clubs who could deny them transfers and effectively end their careers on a whim, they fought against a restrictive maximum wage of £4 a week, and fifty years later it was still a measly £20. To them the idea that one of their number would become synonymous with Spanish tax legislation, that the rules of an entire league would be altered to accommodate his massive salary, that club ownership should be offered as a contact sweetener  would have seemed beyond their wildest dreams. But Beckham has done it all. He’s played for Manchester United, Real Madrid and AC Milan. He’s courted by politicians and movie stars and while he never was a Maradona or a Messi to dismiss his talent, or the spectacular and ground-breaking successes which the maximisation of that talent has brought him is to do him a great dis-service. A poor footballer or a man lacking in intelligence could never have achieved what he has, he has always been more that a great right foot, a haircut and a pop-stars’ husband.

From footballing beginnings so ordinary that they could almost be cliché Beckham has broken glass ceilings most footballers did not even know existed, his celebrity has brought him attention in countries where Pelé is but a dim figure on a sporting landscape. He long ago became that hybrid animal: the celebrity-footballer/footballing-celebrity but he has used this status relentlessly to his advantage rather than let it play a part in his destruction like his predecessor George Best.

It is perhaps his celebrity status that proves most divisive for football fans, the product endorsements; the screaming teenage fans, the sarongs and overt commercialism alienate the “traditional” supporter.  But brand Beckham has managed to energise the growth of football in areas from the Far East to North America.  When FIFA say in their Mission Statement that they intend to “improve the game of football constantly and promote it globally in the light of its unifying, educational, cultural and humanitarian values, particularly through youth and development programmes” they owe a debt of gratitude to Beckham in engaging with young people, globally, that may never have been otherwise drawn to football.

If nothing else the football world should acknowledge his achievements, the next chapter of his career, as a club owner, may be brief but it will certainly be interesting. Whatever the outcome, he’s come a long way since schoolboy games in Chingford.