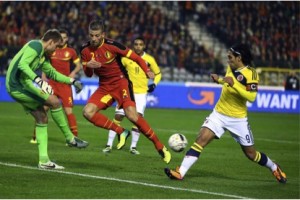 A dark horse is a little-known person or team that emerges to prominence, especially in a competition of some sort or a contestant that seems unlikely to succeed. This is possibly the most apt definition of a modern-day dark horse.

The most recognised team as the tournament ‘dark horses’ are Belgium. Why is that? Possibly because they have a good young prosperous players playing for some of Europe’s biggest clubs.

On paper, Belgium has a very good team and many fans caught onto the dark horses bandwagon, so much so that nearly every football enthusiast now thinks Belgium are the dark horses for the tournament. Belgium have an extremely talented team with a fantastic defensive capabilities and expressive attacking movement. This ultimately subverts the dark horse criteria, they aren’t favourites, but they certainly aren’t dark horses anymore.

The same also applies for South America’s Colombia. Expectations have grown for Colombia to do significantly well at the World Cup due to their firepower in attack and resilient midfield. Despite the prominent striker Radamel Falcao ruled out of the tournament, only the ‘experts’ would be able to unpick and outline the Colombian threats. Watching Colombia’s counter attacking style of play will soon make football fans realise that the tricolour team are a force to be reckoned with. Thus once again defeating the purpose of the term dark horse.

Nigeria assistant coach Daniel Amokachi said there is a togetherness in the squad that makes them “dark horses” for success at the World Cup in Brazil. Does a dark horse have to be in contention for the trophy? That seems the obvious answer, however teams are increasingly being touted to ‘go far’ in the knockout stages. There’s only so much they can handle until they are eliminated by one of the world’s superior teams.

The attraction of football lies within its unpredictability, tournaments being the perfect format to trigger a surprise. Football fans love to support the underdog and teams with lower reputation and will be interested to see how they fare in Brazil. Can the dark horses live up to expectation?

With Spain and England already out, anything is possible during the knockout phase with a few surprises throughout the tournament in Brazil.