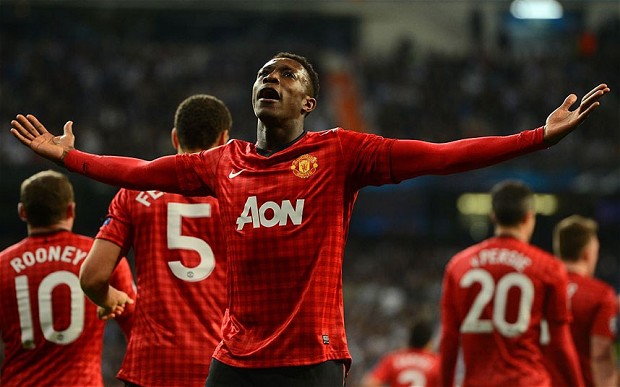 A magnificent leap, a pinpoint header into the corner of the net, a customary point to the name on the back of his shirt and a ‘come at me’ gesture to the disbelieving capacity of the Santiago Bernabéu.

No, this was not the already well-documented brilliance of Cristiano Ronaldo’s equaliser in the 30th minute; it was the birth of Danny Welbeck on the continental stage.

The Englishman, netting just his second goal in 30 appearances this season, was fantastic in the Bernabéu: offering Sir Alex Ferguson the commitment and tactical discipline the Scot has sought throughout his 27 years at Old Trafford.

From Mike Phelan to Park Ji-Sung, Ferguson has always had a soft spot for selflessness. Even with the arrival of the likes of Cristiano Ronaldo, Nani, Ashley Young and, imminently, Wilfried Zaha, this is unlikely to change in big games in the future.

After all, to resist calling on the near-unrivalled movement of Javier Hernandez during the match was a big decision by Ferguson.

Calculated caution has instead become a hallmark of Ferguson’s tactics away in Europe in recent years – a farcry from the naive, gung-ho tactics Ferguson deployed in the Champions League in 1994 , 1995 and 1997.

Still, with the Scot believing Welbeck is continuing to develop and mature physically, more instances of the 22 year old unnerving the likes of Sergio Ramos could become more commonplace.

With such big game nous, there is more to Welbeck than being simply a lanky water-carrier and harrier;

Despite a fairly poor return of 32 goals in 133 games for club and country so far in his career, Welbeck has still netted against the likes of Real Madrid, Manchester City, Tottenham, Arsenal, Everton and Sweden.

This is why Ferguson, even with Robin van Persie being on his way, was so eager to award Welbeck a five-year contact towards the end of last August.

After all, keeping Dimitar Berbatov out of the team – given his brilliance for Fulham this season – was no mean feat and even though Hernandez had a fairly average campaign in 2011/2012, Welbeck’s grabbed the chance.

This is why Ferguson has been so loyal to the Englishman as even though he has undergone an undoubted goal drought in 2012/2013, Welbeck’s head has never gone down when called upon.

His immense performance in the 2-1 victory against Liverpool on 13 January, 2013 was testament to this and heralded a renewed run of good performances. 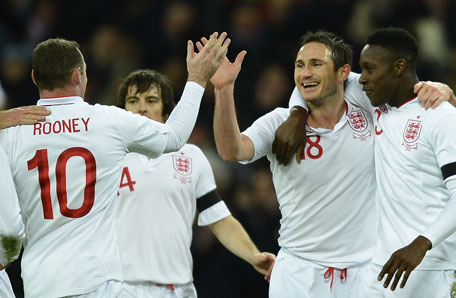 Roy Hodgson took note and even though Welbeck looked out of place on the left wing for England against Brazil on 6 February a month later, he still put in a classy performance in linking play.

Over time, too, his final ball will improve.

So, while some players would have struggled, Welbeck already has more assists (seven) for club and country than he did for the whole of last season (five).

While many United fans would prefer to see their hometown boy improve on his one in three return from last season, Welbeck’s development as an all-round player may make him an even more valuable option for Ferguson.

After all, how many strikers in world football can compare with the goalscoring return of not only Wayne Rooney but, also, van Persie?

Doing what the likes of Phil Neville, John O’Shea, Alan Smith and Ryan Giggs selflessly did in recent years under Ferguson will only see Welbeck’s tactical discipline and all-round game improve immensely.

While there were doubts about whether Welbeck could make the first-team grade, he proved those doubters wrong on loan at Sunderland.

Rather than being just leggy forward with pace, Welbeck proved his top-level credentials at the Black Cats in a dominant performance in the 0-3 victory over Chelsea on 14 November, 2010.

Perhaps, it was no coincidence that when Welbeck was substituted for Andy Carroll on 60 minutes against Italy in the quarter-finals, England’s gameplan suffered and they panicked: flinging long balls at Carroll.

Admittedly, though, the age-old argument returned during the first-half of that night: does Welbeck possess the clinical instincts to lead the line and be a prolific international centre forward?

Perhaps, Welbeck’s re-deployment to the flanks has answered that but that he has now found a position where he can continue his career development at the tender age of 23.