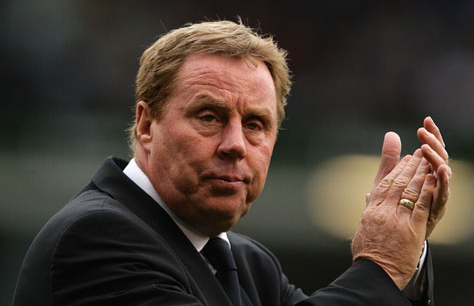 He brought good players, good football and good results, but the time was right for Harry Redknapp to leave Tottenham Hotspur.

While Daniel Levy’s decision to sack the 65-year-old will have come as a surprise to many, it’s difficult to say it wasn’t the correct one.

When the position of England manager became available, Redknapp became the first choice of the media, many of whom he is friendly with. Indeed, he was spoken about as if his appointment had been made.

He did little to quell this talk himself, and it coincided with a big dip in Spurs form that saw them go from outside contenders for the title to having to fight for fourth place.

That was despite Spurs, and Levy, standing by Redknapp during his tax trial, faith he did little to repay. After courting England, he has reportedly also had flirtations with Chelsea and clubs in the Middle East.

His lack of tactical nous became ever more evident, especially with his continued deployment of Gareth Bale on the right wing to little or no effect. He even admitted to having trouble writing out a teamsheet.

He failed to plan for the long-term, instead building a side around 30-somethings like Brad Friedel, William Gallas and Scott Parker, while not quite toeing the party line in terms of the possible sale of the likes of Luka Modric and Gareth Bale.

All of these things have added up to mean he has to leave. He only really has himself to blame.

Redknapp took over at White Hart Lane in 2008 with the club in a perilous position, struggling at the bottom of the league after the tenure of Juande Ramos and two points of eight games.

He took them to eighth in the league and an appearance in the League Cup final – which they lost to Manchester United – but it was his second season that saw Spurs fully realise their potential.

He not only had them winning games, he had them doing so in style and they qualified for the Champions League with a fourth place finish, their most successful Premier League season. His reward was a new contract and being named Premier League Manager of the Year.

The Champions League campaign will be remembered as the pinnacle of Redknapp’s reign, and rightly so.

Drawn into a tough group that included reigning champions Inter Milan and Dutch title winners FC Twente, they managed to not only progress but do so as group winners.

The games against Inter served as the platform that catapulted Gareth Bale into a global superstar and Harry Redknapp into a reputation as the best English manager around. They lost 4-3 in the San Siro, despite Bale scoring a hat trick, and famously beat them 3-1 back at White Hart Lane.

Their growing status was further enhanced with another set of games against a team from Milan, as they were drawn against AC in the last-16.

They again progressed, this time getting a victory at the San Siro (1-0) before holding on for a draw in the return fixture. Their Champions League dream was ended emphatically by Real Madrid, with a 5-0 defeat on aggregate, but there was no doubting that Redknapp and his Tottenham team were ‘the’ story of the 2010/11 campaign.

In the league, they couldn’t quite balance their form with that shown in Europe, and missed out on another season in the Champions League by finishing 5th.

What proved to be Redknapp’s final season saw them finish 4th once more, only to be denied a place in next season’s Champions League thanks to Chelsea’s penalty win over Bayern Munich.

He leaves having achieved good things, but not great ones, which is probably a reflection of his own talents and similarly limitations, and ultimately – along with the reasons outlined above – why he is no longer manager.