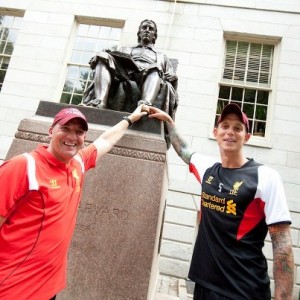 When Liverpool were under the hellish ownership of George Gillett and Tom Hicks the news of a big money move out of the club would send shivers down the spines of near enough all Kopites. But even under the encouraging and secure stewardship of John Henry’s Fenway Sports Group the news of defender Daniel Agger’s proposed move out the club has left fans fearing the worse as rumours spread that one of the Kop’s darlings could soon be forced to change stripes.

Heading into this season fears that near enough all of the club’s highly rated players would be poached by rival clubs following a disappointing season that ended with manager Kenny Dalglish losing his job. News of players like Luis Suarez speaking of their excitement regarding the new season under new manager Brendan Rodgers helped ease the nerves of many but for this transfer window the problem did not seem to be players wanting to leave but rather the club making it clear they would listen to offers for certain players.

Striker Andy Carroll was the first to face up to possibility of being sold just year and a half after his big money move into the club, although a lack of clubs willing to stump up a substantial fee seems like it will block any move but until the transfer window is shut it seems Andy Carroll’s future will remain uncertain.

Manchester City soon arrived on the scene and saw Agger as the perfect latest addition to the club although a lowly bid of a rumoured £15 million was rejected by the Reds and reports that a bid of over £20 million would be required to take the Dane to Eastlands did much to settle fans nerves.

Even more reassuring was the fact that Agger had even had the initials ‘YNWA’ tattooed onto his knuckles in reference to the club’s anthem ‘You’ll Never Walk Alone’ and many saw this as a physical sign that the central defender was more than happy exactly where he was.

If this was just another player faking his profound love for a club before forcing through a move away then the tattoo has certainly made it convincing.

Although it did not seem to matter how convincing Agger made his plea to stay. It seemed that it would not be in his hands as reports circulated that Liverpool would listen to offers for the player with many reporting that Rodgers would allow the move for an offer of £27 million or even a package that included Adam Johnson in an exchange deal.

Such a substantial package would undoubtedly be useful for the club especially since Rodgers has made it clear he has not been granted with a transfer war chest similar to that of Dalglish last summer. Already there have been a number of exits from Anfield as they look to balance to books and lower the wage bill as high earning squad players like Dirk Kuyt, Maxi Rodriguez and Craig Bellamy were granted moves away from the club. Although, Rodgers has already been strengthening his side with the acquisition of striker Fabio Borini and midfielder Joe Allen, both of whom he has worked with in the past.

Whilst many players would come to accept that it may be time to move on, Agger has been quick to reiterate his desire to stay at the club saying that any move away would not be his decision, some sources even report that he may reject any contract offers if Manchester City were to agree a fee with the Merseyside club.

Agger has even gone on record on numerous occasions saying that he would never play for another Premier League club and that the only club that could tempt him away would unsurprisingly be Barcelona. The Catalan club in fact had reportedly shown an interest in the defender earlier on in the window although it seems any interest has waned at least for the time being.

For Manchester City it has become a rarity for a player to turn their approaches down with many Premier League sides losing a number of key players to the billionaire club. For once it actually seemed that the club would be the one falling for the cash that the Manchester club can offer rather than the player.

But would allowing a top player to leave be a good move for Liverpool?

Since his move to the club in January 2006, Agger has become a key player for the club although he has had his fair share of injury problems having appeared in 119 of 247 possible league games. With the defenders injury record in mind a deal such a high fee or even a player of Adam Johnson’s talent in exchange offers great value for the club.

However, the player is respected as one the best defenders in the Premier League and Liverpool do not want to enter the business of strengthening their rivals. The partnership he has developed with Martin Skrtel shows a great amount of promise and could become one of the most astute in the league, having had the third best defensive record in the Premier League last season despite the side having finished eighth.

There has already been speculation that Atletico Madrid’s Diego Godin has been sounded out as a replacement for the Dane as well as a possible move for Swansea City captain Ashley Williams. Although fans do not seem interested in losing a player they hold in such high esteem no matter who is rumoured to replace him.

The owners have already upset many fans by disposing of club legend Dalglish at the end of last season although the appointment of Rodgers appears to have been successful in easing the tension. However, selling a player so popular amongst fans who has shown a clear intent to stay would do much to harm relationships between FSG and the club’s loyal followers, a force that many credited as the catalyst for forcing Hicks and Gillett away from the club for good.

Fans were in good voice during the club’s first competitive home game of the season, with chants in support of Agger being sang all the way through the game. Rodgers has even spoken of his desire to keep the defender at Anfield which has confused many as to why this speculation that he could be forced out the club still goes on.

Agger recently spoke in an interview saying that it was the owners who seemed to be the ones who would decide his future although did say that Rodgers would have the final say on the deal. Whilst cynical fans would see this as FSG looking to recuperate some capital it rather seems that Rodgers has been informed that the owners will not stump up the funds for big transfers and whilst they will obviously look to support the coach they will not be making the same mistakes they did last summer.

After all this is a club that is without Champions League football and as financial fair play regulations approach the club will want to ensure they are living well within their means having already secured a number of lucrative commercial deals to offset the loss of elite European football such as their shirt manufacturing deal with Warrior Sports.

If one thing is for sure in this transfer saga, in a time of greed and ego Liverpool fans can be proud that they have a player who truly loves the club.

Even club’s finishing in the Champions League places have been left at high risk of players looking elsewhere due to an apparent lack of ambition and in truth this whole transfer saga helps show that despite all Liverpool’s recent failing they are still showing the ambition that would have attracted Agger as well as many others to the club all those years ago, a true sign that the Liverpool of old is still far from dead and also that true loyalty in football has not yet been killed off. Not yet.