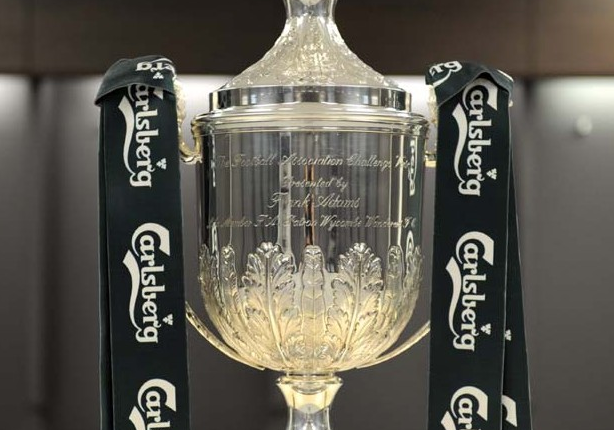 Saturday sees the Wembley final of the FA Vase; the national competition open to England’s lowest ranked senior clubs. For those whose aim this season was mere survival, and where crowds rarely break double figures, it is the ultimate day in the sun. Close-quarter pleasantries with the players, a normal feature of matchdays, are for once impossible.

Vase final day can be odd for the neutral and surreal for the committed fan; with the combined support of the finalists not filling half the stadium. Supporters on first-name terms with the team are suddenly transported from pitchside to grandstand; waving from afar at players they’re more used to sharing a beer with.

The Northern League dominates the competition, its remoteness a barrier and a bonus to clubs whose Pyramid progressions are stifled, but whose status guarantees Vase entry against more fragile wannabees of nominally equal leagues. Like pike among tiddlers, the Northern Leaguers have hoovered up the opposition, and claimed the last four finals. In a game that screams Culture Clash, this year’s representatives, Spennymoor Town face Kent League Tunbridge Wells, whose semi-final defeat of Shildon put paid to another all-Durham final

The Vase began in the shadow of the FA Amateur Cup, which ceased in 1974 after the FA acknowledged the existence of boot money. With the FA Trophy drawing the bigger beasts, the Vase was left to the Whalley Range Amateurs and Whitkirk Wanderers of the non-League game, and struggled for support; the first final drawing under 10,000 to the national stadium.

Lack of interest was not confined to the final, with the Vase no stranger to roped off pitches and single-figure crowds. The quartet who turned up for Ulysses v Erith and Belvedere in 1981 produced takings of £1; barely enough for a king-sized Mars in the club shop. In its early days, the Vase straddled park football and the lesser lights of non-League, though stricter rules gradually put leaky dressing rooms and toxic toilets out of bounds, so denying players and spectators alike the squalid charm of less appealing venues.

But Wembley success is earned at these out-of-the-way places, such as the sadly-disappeared Snakes Lane, Woodford, scene of Leyton-Wingate’s 1984 victory on a pitch best described as ‘heavy’. Or at Whyteleafe in 1986, where fellow Isthmian Leaguers Stevenage Borough, yes them, won 4-1. Stevenage succumbed to Southall that year, their sights set on bigger things. And they weren’t the only ones.

Tucked away in the Preliminary Round of 1981-82 were eventual winners Forest Green Rovers, then of the Hellenic League. Their opponents at Wembley were Notts colliery side Rainworth Miners Welfare, whose players paid subs to play, The Welfare attracted a record 5,071 for the semi-final with Barton Rovers, with some fans accommodated on a long-dismantled terrace of railway sleepers.

While the Vase drew curious fans to their local clubs, unsung players trod a similar path. Future England centre forward Les Ferdinand, a 19 year old painter and decorator in 1986, led the line for Southall in their Wembley defeat to Halesowen. A decade on, Clitheroe and later Manchester City ‘keeper Carlo Nash, then a 21 year old student, also left with a loser’s medal before starting a Frank Worthington-style odyssey of nine clubs; his latest being Stoke.

As for this year, Tunbridge have a chance if they play the match and not the occasion. They can take heart from the record of Billericay Town, three times winners in the 70s as they rose from the Essex Senior League, and Arlesey, who upset the odds against Oxford City twenty years later. All the same, a Tunbridge victory on Saturday would be a similar surprise.

Spennymoor are favourites thanks to three League titles since 2010. They also boast a squad full of Wembley experience, including midfielder Chris Moore, a Vase and Trophy winner with Whitley Bay and Darlington respectively. Manager Jason Ainsley though, who has spent 20 years at the club, cites Chairman Bradley Groves as the force behind their Vase run – the £24,000 spent on flights and hotels for the Guernsey semi-final is ample proof.

This may motivate Tunbridge, who claim no such backing, The ‘Wells boss is 32 year old Corporate Accounts Manager and former Ashford Town fitness coach Martin Larkin, who, unhindered by his lack of playing experience has them closing in on a first major trophy.. His secret weapon (in all senses) could be club captain Jason Bourne who will claim the Vase for Kent if he shows half the commitment of his cinematic namesake. Larkin, however, cuts a more serious figure; “If we wanted a day out at Wembley, we’d do the tour”.

The record Vase final crowd was for Truro v Totton in 2007, when the novelty of the new Wembley pulled in 36,232. That will not be threatened this year, but with ticket sales already topping 10,000, the noise should at least keep the players out of earshot..”