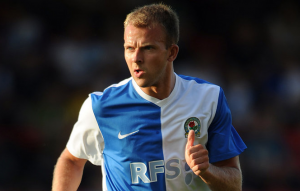 It is a time in the season when a host of teams in the Barclay’s Premier League are crying out for a prolific goalscorer. West Ham United, Aston Villa, West Bromwich Albion, Stoke City, Cardiff and even top teams like Tottenham Hotspur and Manchester Uniter are largely lacking in the striker department, and are often misfiring in front of goal.

Fortunately, the January transfer window is open and the typical scramble for reinforcements in well and truly underway. But whilst many clubs will cast the net of potential targets far and wide, I would argue the solution to any teams goalscoring problems is sitting right here under our noses, in the form of prolific Scotsman Jordan Rhodes of Blackburn Rovers.

Rhodes has scored goals at every level he has played at. Starting his career slowly at Ipswich, Rhodes moved to Huddersfield where after a notably successful loan spell at Brentford in which he scored seven goals in 14 games he went on to become one of the most revered strikers in the clubs history. In all competitions Rhodes scored a highly impressive 87 goals in 148 appearances for the Terriers, including a remarkable 2011-12 season in which he scored 40 goals in 45 games as Huddersfield stormed to promotion to the Championship from League One.

Since then Rhodes has donned the famous blue and white halves of Blackburn Rovers, and the goals have kept flowing- Rhodes scoring 42 goals in 73 appearances for the Riversiders, including a 16 so far this campaign. On an international level, Rhodes’ form has perhaps been even more sparkling, becoming Scotland u-21’s all time leading goalscorer with eight in eight, before going on to score three goals in 11 appearances (in a very average national side it must be said).

Prolific, lethal, clinical, strong in the air, imposing physically combined with a predatory instinct for goal and a touch for the spectacular and technically superb- Jordan Rhodes seems to have proven that he has every attribute to compete at the highest level, and seems to have every attribute you would assign to a prototype of a world-class striker. Of course, Rhodes is far from world class at this stage, however at the age of only 23, Rhodes has his best years ahead of him, and the fact that Rhodes has racked up 255 league appearances at his relatively tender stage of his career acts as an indicator for the esteem in which he is held wherever he goes.

A top drawer prospect and a real rarity in the sense that Rhodes seems to be a natural goalscorer. So, what is stopping Premier League clubs snapping up Rhodes, seemingly the paragon of British striking talent if you were going by my description.

Logically, the only thing that is deterring a Premier League club from making a solid offer for Jordan Rhodes would be the inevitably high asking price that Blackburn would slap on his head. Rhodes did of course become the  in August 2012 when he joined Blackburn from Huddersfield, setting the Lancashire outfit back a sizeable £8million. Furthermore, Rhodes has made it quite explicitly known to the media that he is fully committed to the club, and even harbours hopes and getting to the Premier League with Blackburn Rovers. In an interview with the Daily Star Rhodes is quoted as saying:

I love going into Blackburn Rovers every day and I love the club, until I’m told otherwise, I am a Blackburn Rovers player and happy to pull on the shirt…Of course it would be nice to play in the Premier League. I don’t see why we can’t do it this season if we can put two or three victories together and go on a run.

It seems that Rovers are equally unwilling to sell. As Blackburn manager Gary Bowyer says when talking to Lancashire Telegraph:

Jordan Rhodes isn’t for sale. I was never very good at maths but we paid £8m for him, then he goes and scores the most goals in the calendar year – more than Luis Suarez – and yet he is still valued at £8m. That doesn’t quite add up to me – but then again I’m no Carol Vorderman!

Vorderman or not, it is hard to argue with Bowyer’s point. Combine his initial price tag, his reluctance to leave the club and indeed Rovers’ reluctance to sell, one can assume that Rovers would not settle for anything less than what they paid for Rhodes, and are probably in a position to make profit on their joint record signing. In this post-modern footballing age of multi-million pound deals and inflated transfer fees, you could expect someone as prolific and expensive as Rhodes to fetch at least £12million.

However, as the old idiom goes, you get what you pay for. When a Premier League outfit does eventually stump up the money for Rhodes they will be purchasing the most lethal and clinical striker outside of the top flight in Britain. When a club takes the risk on Rhodes, they will not be investing in a player, they will be investing in goals (and in plentiful amount one would suspect).

It seems ridiculous that a player with a record like Rhodes’ (139 in 255) should be plying his trade outside the Premier League. He has proven himself on every domestic and international level, and remains the most revered and feared striker in the Football League. Profilic, strong, collected and still only young, it seems that Rhodes has one hell of a future ahead of him- a future that seems to be setting him on a crash course with Premier League defences very soon.

As a West Bromwich Albion supporter, I only hope we sign him up, so it is not our defence he is crashing through.