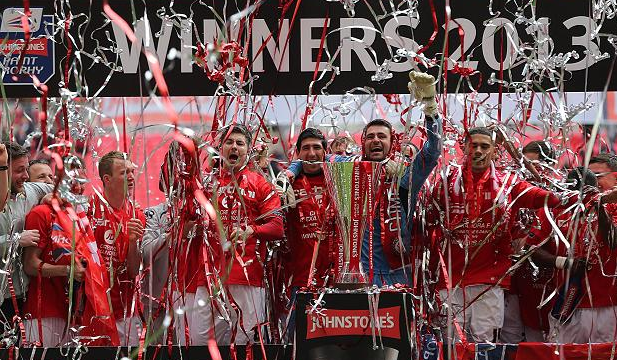 An excellent day in the sunshine for Crewe, a masterclass from their young stars delivered their highest honour to date. The Football League Trophy. Right from the off they showed their intent and inside six minutes, Luke Murphy scored a goal worthy of being in the Champions League from a well worked corner. There was constant invention in Crewe’s game and they were awarded in the second half when Max Clayton doubled their lead. A convincing 2-0 win, it was great to see Crewe rewarded for their hard work.

The win was dedicated to Adam Dugdale who tragically lost his newborn baby recently and was unable to make the Cup Final. Boss Steve Davis was quick to affirm Crewe were right behind their man:

We’re a family. We’re that sort of club. We rally and get behind people.

That is what is good about Crewe, they embody the small town football league club. A small business, fighting to compete on a limited budget.

A key to the Football League, their attractive brand of football first brought to the club by Dario Gradi. The club have earned the reputation of being filled with wealths of talent, the Crewe academy is well regarded and has provided some top players to the Football League including: Dean Ashton, Danny Murphy and now Aston Villa’s Ashley Westwood who is set for a top career at Villa. Against Southend the academy graduates delivered, Luke Murphy showed exactly why he’s club captain at just 23 and Max Clayton showed why the top clubs such as Manchester United & Manchester City are interested in him.

The latest big star to come from the Crewe academy has yet to make a major impact at Manchester Untied. Nick Powell was signed for a very hefty 3m, enough to keep the Cheshire club in financial comfort. Still only 18, he has time to have a long and successful career at Manchester United. A goal against Wigan has been his finest accolade to date. A loan to a Championship side could do him the world of good. Harbouring the potential to be an England regular, it is important United support his needs.

It was valuable experience for the young players who have now featured in two Wembley finals in 12 months, both ending in victory. The first being the League 2 playoff final win over Cheltenham and the second being the 2-0 win over Southend. Max Clayton told the Crewe’s website the feeling was unbelievable:

To start at Wembley and win and get a goal as well, is just everything you dream about.

He continued to describe the celebration as indescribable:

I don’t remember the celebration, I was all over the place with it. You cannot explain it.

Perhaps the trophy victory will spark big things from Crewe, sitting comfortably in League One with survival easily wrapped up attentions can move to next season. High efforts will be made to keep the current crop, but high fees for the young starlet’s may give them some backing in the transfer market. The playoffs in League One have been hotly contested this year, with some sides surprising. Crewe could be the side to surprise next season.