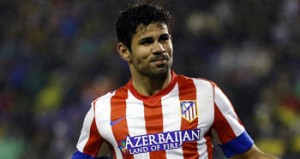 It has been a very long time, too long in fact, since a team other than Real Madrid or Barcelona won the title in Spain. However, this year could be different.

The new kids on the block, Atletico Madrid, are starting to give the big boys a run for their money.

Diego Simeone’s team are having a sensational season. Thanks to a great squad of players, a fiery manager and an incredible worth ethic, Atleti are challenging for the title with two of the biggest teams in Europe. Real and Barca are head and shoulders above Atletico in terms of squad depth and finances, so how are the men in red-and-white not only competing, but overcoming, these incredible powerhouses of world football? And could they do the impossible and pinch the title from the strong grasp of the Big Two?

Over the last few seasons, Spanish football has become increasingly dominated by the two giants, and they have been leaps and bounds ahead of the rest of the league. With the top two often finishing 15 or 20 points ahead of their nearest rivals, is it too naive to say that Atletico have a big chance of winning the league this season? Or are they genuine contenders?

Firstly, we must look at the reasons they have come this far in the first place. Much of the credit must be given to their talismanic young manager Diego Simeone. He has brought a new philosophy, a new drive to the club, and he has turned them around from being a team content with a top five finish, to a team challenging for trophies. All of his players put in 110% in every game for him and if they don’t, they’re in big trouble. This do or die mentality has changed the way his players perform. Simeone has been a major part of Atletico’s wonderful season, and will surely see his talented squad grow and grow over the years.

Another big reason for their success is the goals and feistiness that striker Diego Costa has brought to the team. After some successful loan spells away from Atletico, Costa returned to the Vicente Calderon a much more developed player, and his performances this season have attracted attention from some of the Premier league’s top clubs. Many criticize his offensive, often brutal style of play, and his aggression can sometimes step over the line in games, but no one can deny his ability, and he is the kind of player that can inspire a whole team to victory.

Atleti’s performances often reflect those of Costa’s. Without the 19 goals he has supplied this season, they would be in trouble, but there is more to their squad than one quality striker.

Atletico have one of the most impressive squads in Europe, not necessarily because of the value of the players, or the amount of goals and assists they have, but because of their incredible willingness to perform, to help the team and impress the manager and fans. They never give up in any game, be it the first round of the cup against a Second Division side, or a crucial league game against Real or Barca. An attitude like this is hard to find among the egos of European football.

The squad at Atletico have a strong bond, and will do anything for their team mates. Losing hurts them as individuals and as a unit. Not only do these players have a great attitude however, there are also a large group of massively talented lads in that team. Koke, their 21-year-old midfielder, has been dubbed the next Xavi, goalkeeper Thibaut Courtois is on loan from Chelsea and is seen by many as the best young keeper in the world, and they have a top class defence that includes the Brazilians Miranda and Filipe Luis.

This team sounds like one that could be challenging for European trophies, dominating their league campaign, so why shouldn’t they go on to win La Liga? The dominance of the big two in Spain needed a big kick up the backside from the rest of the league as they were beginning to become unbeatable, and they got it from Atletico Madrid. Should they take their chances and play to their full abilities, this could be the year of a new champion. And if it is, they fully deserve it.