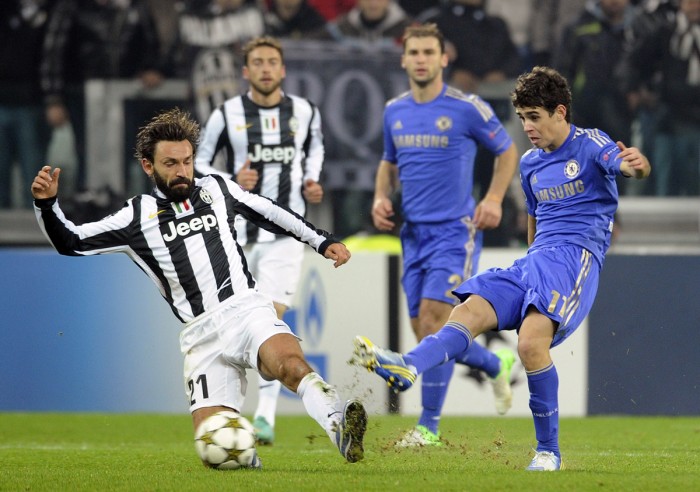 As Chelsea continue to construct a side built on a wealth of attacking talent, a player who could be key to the club’s future success is celebrating some of his own this week, having helped his country to victory in the Confederations Cup.

Oscar, signed from Internacional in his native Brazil almost a year ago, rounded off a long first year in England tasting success by getting his hands on the silverware of the Europa League domestically, and turning several heads in the process.

The 21-year-old was the recipient of several seductive glances from top European teams before he plucked for then-Champions League winners Chelsea, leaving Inter for a fee in the region of £25m. Big money for such a young and arguably unproven player, whose slight frame was called into question in the face of the Premier League’s physicality. The praises of his national teammates at the London 2012 Olympics soothed any Blues fans’ fears: “Put it this way, he wears the number 10 for Brazil, and we don’t give that shirt out to just anybody” claimed manager Mano Menezes. Oscar was given the number 11 shirt at Chelsea, and was thrusted into the rather large expectations left by its previous wearer – Didier Drogba.

Fast forward to the current day, and you’d be hard pushed to find a Chelsea fan who could be too critical of  Oscar’s first season at SW6. While his assist tally of 9 paled in comparison to the 28 and 20 of Juan Mata and Eden Hazard respectively, it’s more the style of Oscar’s play which has propelled him into the hearts of the Stamford Bridge faithful. His once-questioned frame aids his exciting slaloming runs, while his audacious and sometimes outrageous tricks and touches bring a flair to the pitch which has been lacking since Joe Cole suffered the knee injury he would never quite recover fully from, in 2008.

And yet, with the arrival of Jose Mourinho, Oscar’s future has been momentarily left in doubt as fans and onlookers alike await to see what recruitment policy The Special One puts into drive on his return. The club have already secured Andre Schurrle from Bayer Leverkusen, and it’s a signing which could put Oscar’s future in the attacking lineup in jeopardy.

Schurrle is an undoubtedly talented signing. A six foot tall striker-cum-winger who likes cutting in from the left wing to unleash his trademark long-shot off a preferred right foot. It seems unlikely and foolhardy (though this is Abramovich), to sign such a prospect for the £20m being touted only to leave him on the bench. Add returning loanee Kevin de Bruyne into the mix, and you soon realise something’s got to give. Fellow German Marko Marin has departed to Sevilla for the season, clearing the way for his compatriot, and out of last season’s attacking midfield trio, Oscar suddenly looks like the ‘weak’ link, if you can call it that. It looks like fans should fully expect the first-choice three starting behind the striker to look like: Schurrle – Mata – Hazard, rotation and injury permitting. Today’s signing of Lampard-heir-apparent Marco van Ginkel further outlines a youthful policy, and depending on where you get your news, Chelsea are just getting started too, with any number of Cavani, Lewandowski, Hulk and Rooney on the verge of arriving at the Bridge.

Let’s make a case for Oscar dropping back into the centre of the midfield then. The most important thing is that time is on his side. Making his professional debut at 17 for Sao Paulo, he went on to make another ten appearances until a contractual dispute led to him joining Internacional in the summer of 2010, but also restricted him to just 36 matches in that time. However, with 11 goals from that attacking role, he began to make a name for himself around Porto Alegre. In the larger scale of Brazil however, he was relatively under the radar, eclipsed by Santos’s Neymar and Ganso, and his old Sao Paulo teammate Lucas Moura. Ironically, Oscar would go on to replace Ganso in the national team in the hole behind the striker, and their careers have taken particularly different directions since then. But at the age of just 21, with excellent experience, and under the guidance and coaching of arguably one of the greatest managers to grace the European game, there’s no doubt Oscar could adapt to a new role with Mourinho overseeing the change.

Andrea Pirlo, after all, made the same positional transition. During his time at Brescia in 2000, Pirlo was handed a new deeper playmaking role by manager Carlo Mazzone. Roberto Baggio had just arrived from Inter in the hope of boosting his World Cup hopes, and was himself moving further downfield, playing in the trequartista role instead of as the lone striker. Mazzone saw Pirlo as the perfect compliment to Baggio, and shifted him in the deeper midfield role while retaining his onus on Pirlo’s playmaking abilities. The result was a success, albeit as shortlived as Pirlo’s time at Brescia was. The Italian stallion has gone on to be widely regarded as one of the true geniuses in the sport, garnering the nickname The Metronome from his teammates.

It would be unjust and wrong to compare Oscar to Pirlo at this stage, but the foundations are certainly there. Oscar has shown his willingness to put his foot in and tackle, as well as track back to cover his defense. He spreads play from around the pitch, and loves a good forceful dribble. His frame and size will adapt with age and time, and with a defensive minded player next to him, a la Mikel, Romeu, or even van Ginkel, Oscar would have the creative licence to advance up the pitch. He’s born of the Brazilian bottle, with a pure footballing brain where the focus is very much on attack, but if he was to succeed in a deeper role he would have to hone his defensive skills, and be mature in finding the right times to break forward.

Of course, it goes without saying that this is all speculative. His abilities as an attacker have led to comparisons to Kaka and Ozil, and Mourinho may indeed be keen to harness those traits as they are. The 2013/14 season will signify a third year without a break for the youngster though, with the Olympics, Confederations Cup and next summer’s World Cup taking up his rest periods. Mourinho must be aware not to burn out the Brazilian, especially given Chelsea’s absurdly long domestic season last year.

It’s just one of several headaches Mourinho faces at Chelsea, but he’s the kind of guy to relish them. Chelsea are the blackboard for his plans, and Oscar is his chalk. Whether Mourinho can mould the Brazilian into the deep lying playmaker the Blues have sought over the last few years remains unknown, but not entirely unlikely.