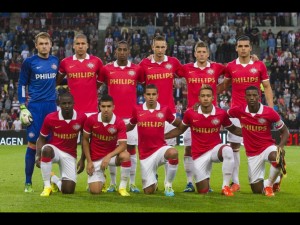 “We break their asses, we scare them, these are children!”

Those were the remarks made by Milan’s Phillipe Mexès to his team-mates in the tunnel before last night’s Champions League play-off with PSV Eindhoven at the Phillips Stadion. ‘The Rossoneiri’ clearly felt that they could sweep aside Phillip Cocu’s youthful side with apparent ease. A 1-1 draw will be seen as a decent result for Milan. The Italian side, while hardly underestimating PSV, will have been surprised by the quality and intensity the Dutch side played with. It was a hugely impressive display by PSV and it bodes well for the future.

After finishing second to Ajax in last season’s Eredivisie, PSV’s squad was decimated in the transfer window. Kevin Strootman joined Roma for €17.5 million, while the talismanic Mark Van Bommel retired, leaving a gaping hole in midfield. Jermain Lens, who scored 19 goals last season, joined Oleh Blokhin’s revolution at Dynamo Kyiv. Erik Pieters joined Stoke, while Dries Mertens signed for Napoli. His loss will be greatly felt, as he scored 45 goals in 88 appearances in two seasons in Eindhoven and was their creative fulcrum. Ola Toivonen may well leave too. The departure of so many key players will surely effect PSV at some stage, but they have clearly approached this season with faith bestowed in youth.

Cocu, similarly to his former Dutch team-mate Ronald De Boer at Ajax, has blooded as many youngsters into his side as he can muster. The age profile of the PSV squad is fairly astonishing. Of the eleven who started against Milan last night, only Stijn Schaars, Park Ji-Sung and Tim Matavž were over the age of 22. In fact, during PSV’s 5-0 demolition of NEC in the Eredivisie, their front three consisted of 19 year-old Jürgen Locadia, 19 year-old Mephis Depay and 17 year-old Zakaria Bakkali. The latter scored a hat-trick in that game and was called up to the Belgian squad last week. Another prodigious talent from the Belgian conveyer belt, Bakkali looks a superb prospect.

Importantly, those young players have settled into the side nicely. Jeffrey Bruma and Karim Rekik have shown great poise and discipline at the back, while the midfield is very strong. They have won three games out of three domestically, and have scored 11 goals while only conceding two. The major question will be whether ‘Cocu’s Kids’ can put up a sustained league challenge. Ajax, champions in each of the last three seasons, have already lost to AZ. It is usually difficult to win four successful titles in any league, as motivation and desire can wane. PSV may sense an opportunity as they look for a first league title since 2008. ‘Rood Witten’ have also appeared to have made the signing of the summer in Holland, nabbing Adam Maher from AZ. Ajax had enquired about the Moroccan born Dutchman, but turned down the chance to sign him. It would be poetic justice for Maher if he inspired his new club to a championship ahead of the club who passed up the opportunity to acquire his services.

PSV have an uphill task in qualifying for the Champions League now, winning in the San Siro is always difficult. They have shown enough this season to suggest that they can seriously challenge Ajax domestically, and provided they can keep this group together, will be a side to watch out for in future seasons. Phillip Cocu is building a vibrant young team who are capable of playing exhilarating football. The exuberance of youth can will win them plenty of games, but there will be tests along the way. They clearly can produce an attractive style, but can they turn style into substance? Can they turn talent into trophies?